Tänak holds off dogged Neuville on Day 1 in Germany

Championship leader Tänak, chasing a fifth victory of the season in his Toyota Yaris, won four of the six speed tests to head Neuville by 2.8sec after a thrilling duel.

In baking temperatures nearing 30°C, the pair distanced their opponents on bumpy and narrow vineyard roads above the Mosel river and country lanes in Saarland with world champion Sébastien Ogier third in a Citroën C3 – 22.1sec off the lead.

Tänak led after Thursday night’s curtain-raising test, but was relegated by Neuville in this morning’s opener. He moved back in front on the next stage and although his Belgian rival narrowed the deficit when the stages were repeated, Tänak retained a narrow advantage.

“There is nothing comfortable when the fight is like it is,” said the Estonian. “Thierry is doing very well but rallying is never a walk in the park and there is still a big battle.

“It’s exactly what we expected – fast stages and small gaps. Tomorrow is a very difficult day and the long military road stage will be so important.” 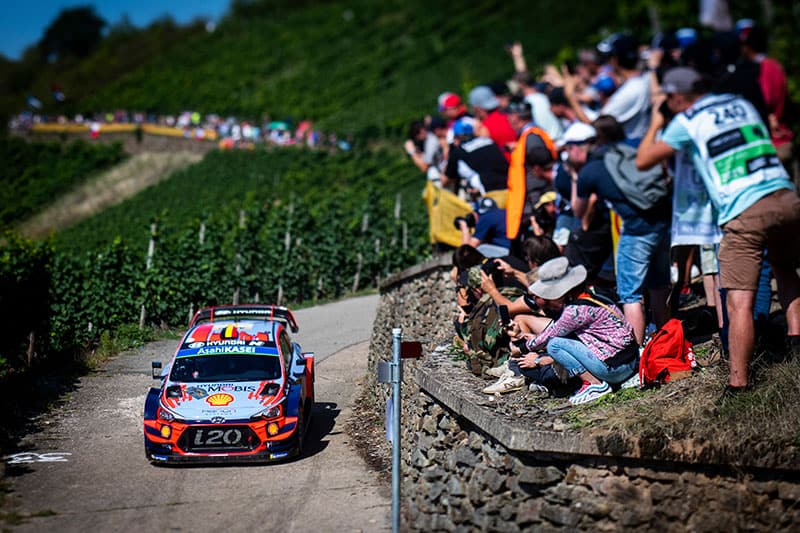 Neuville won the opening test of the loop on both occasions in his Hyundai i20 and there was little Ogier could do to stay in touch as he wrestled with an understeering Citroën C3. He lost more valuable seconds after stalling his engine and later sliding into a field.

Kris Meeke and Dani Sordo were closely matched in a battle for fourth. Meeke held the initiative all day in his Yaris, until Sordo edged ahead in the penultimate test, only for his i20’s gearbox to jam in first gear in the final stage. He lost almost a minute to plunge to ninth.

Finn Jari-Matti Latvala capitalised to climb to fifth in his Yaris, despite sliding into a field in the final test and struggling to perfect his braking. He was 2.2sec adrift of Meeke and 12.2sec clear of Andreas Mikkelsen in sixth.

Teemu Suninen was the only major retirement, stopping early in the opening special stage with fly-by-wire motor failure in his Ford Fiesta.

Saturday features a double loop of two country lane tests in Saarland before the action shifts to the intimidating multi-surfaced Panzerplatte military roads. Four abrasive stages there, packed with awkward junctions and lined by car-breaking kerbstones, raise the day’s total to 157.92km.

Paddon back in action in Australia: