Targa win still up for grabs in Cairns - RallySport Magazine

Targa win still up for grabs in Cairns 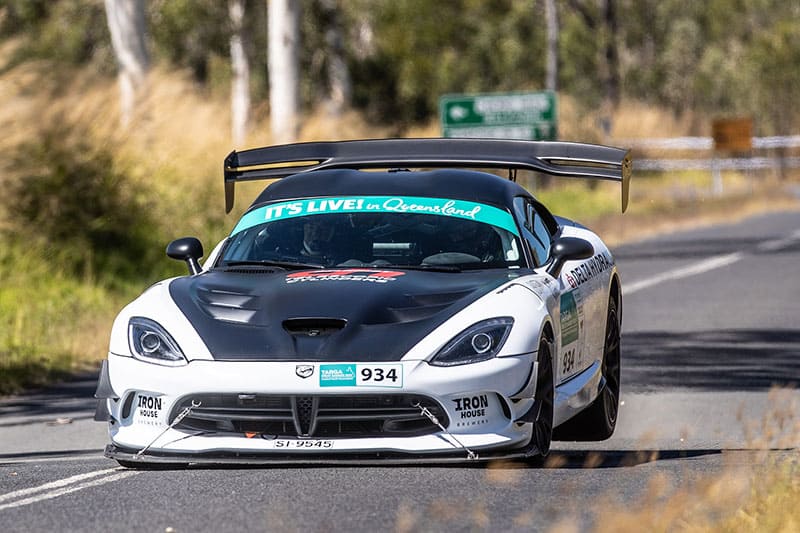 Tasmanians Jason and John White are clinging to a narrow lead after the second day of Targa Great Barrier Reef.

With 10 competitive stages in the books, White in a Dodge Viper is 11 seconds up on Paul Stokell and Kate Catford in their Lotus Exige.

The second edition of the Cairns-based event is set for an epic showdown with more than 111km left to run across six stages on the final day on Sunday.

White went into Day 2 with a slender six second buffer before extending the advantage to 18 seconds after TS7 and squeezing out another second on the following stage.

But the Viper charger saw his advantage trimmed to 13 seconds after TS 9 (North Johnstone), with Queenslander Stokell charging hard across the 6.8 kilometre stage.

Then on the final run of the day (TS 10 Yungaburra), White dropped a further two seconds in a gripping battle for the Modern Outright and It’s Live in Queensland GT2 honours.

The inaugural Targa Great Barrier Reef champion said he had continued to push hard but conceded he needed to refine his pace notes.

“We were going along as quick as we could but we just needed to put a bit more homework into some of the long, tricky crests,” White said.

“The car is in good shape for tomorrow. There’s a couple of little changes we need to do with tyre pressures to get it all very comfortable. So it’s just fine-tuning a tweaking around that.

“Given the different temperature up here and the road surface it makes quite a difference with the tyres, and it’s crucial as to what pressure they have in them and how hard you can drive.”

Jeff Morton and Daymon Nicoli (Lotus Exige) remain in touch after topping three stages that has left them just over a minute off the lead.

In one of the most hotly contested categories, Cairns Regional Council GT4, 12 seconds separates the top three.

Luke Anear and Alan Stephenson (Subaru WRX) seized the lead on the final stage of the day to head the experienced Tony Quinn and Dale Moscatt (Nissan GTR) by two seconds. Geoffrey and Toni Hewitt (Nissan GTR R35) are just 10 seconds back in third.

After dropping a cylinder on Day 1 Jon and Gina Siddins (1970 Datsun 240Z) commenced a charge before they had an off on TS 9 (North Johnstone) to end their event.

Shannons Classic (handicap) remains tightly contested with Peter Gluskie and Samantha Winter (BMW 325) edging to a 17 second over the oldest car in the field, the 1941 Jimmy Special of Graham Copeland and Josh Herbert. Ashley Yelds and co-driver Mary Hughes are well in touch in third place, just 36 seconds back.

There was some interesting developments in TSD Trophy with the lead now shared by Peter and Tristan Taylor (Lotus Elise S) and Darryl and Peter Marshall (Ford Pursuit Ute) who are locked on 11 points.

The event wraps up on Sunday afternoon at the Cairns Convention Centre, but with the biggest day of the event remaining, the top contenders know it’s a long way to the finish line if they are to enjoy the spoils of victory.