Team Citroën Australia on the podium at Forest Rally

Adrian Coppin and Tim Batten have finished third outright at the QUIT Forest Rally over the weekend, after a close duel with team mates Tony Sullens and Julia Barkley, who came home in fourth. The podium marks the second for Coppin and Batten this season, after placing second at the National Capital Rally last month. The rally marked the 30th anniversary of the event in the Busselton region, south of Perth, as competitors were received by pristine weather, a strong crowd, and challenging stages over both tarmac and gravel.

The event started well for Sullens and Barkley, who were sitting in third place after the initial tarmac special stage, while Coppin and Batten were further down the field in in seventh. This was the first time both drivers had competed on tarmac in the Citroën DS-3.

“At the start of the day we didn’t think we’d get the car set-up right, but this evening it all turned around for us and we’re now in third. This event will test the adaptability of the Citroën DS-3 and the team. We’re still learning the car, and every surface is different,” said Sullens. 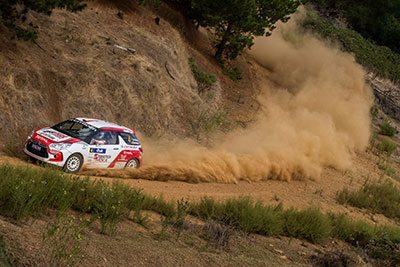 “It’s unique to start a rally on tarmac, and not something I’ve had the opportunity to test or race on in the Citroën DS-3. From today, I have learned to improve my launch on tarmac, something I’ve never had to do before,” said Coppin.

The second day of competition saw teams take to the forests surrounding Nannup, where Sullens again started strong and maintained a faster pace over Coppin in the morning. After suspension changes and a boost in confidence, Coppin answered back in the afternoon, climbing from seventh to third, leading in to the final day with a podium position to preserve.

“We were in seventh going in to the afternoon stages, and decided to make some adjustments to the suspension of the car to soften it up a bit. The car transformed, we got our confidence back and were able to push on. We overcame Tony for 3rd place today which is somewhat taking the good with the bad, but overall, a fantastic showing for Team Citroën to have both cars in the top end with no issues,” said Coppin.

Unfortunately for Sullens, suspension issues plagued the afternoon leg of competition, seeing him drop off the pace and finish in fourth.

“We started brilliantly, then it somewhat went downhill from there. In the morning we were on the pace well and the Citroën DS-3 was handling the roads with ease. Later on, we thought we had a flat tyre, but when got out to check, everything looked fine. We weren’t sure what had happened, and we lost a heap of time driving slowly to accommodate the then unknown issue. We’ve found the problem now and it’s an easy fix. Tomorrow I will start with an even keel and be looking to make up time,” said Sullens.

The final day of competition gave competitors the chance to redeem themselves and a last attempt at a podium spot. The first taste of true team rivalry came for Team Citroën Australia, as Sullens was looking to get back the podium spot which his team mate had taken just the day before, and Coppin was looking to defend it.

“We started off a bit slowly this morning but we came back strong this afternoon and it paid off. I’m ecstatic to have a second podium in as many rallies; a dream start to the season,” said Coppin.

“This event was tough. There were times we thought we’d have damaged the suspension, had a flat tyre or smashed a wheel, but Adrian just clicked to the next gear and the Citroën DS-3 kept going. The car is amazing, and nothing phased it,” said Batten.

Sullens finished the day strongly, but it wasn’t enough to clinch the podium spot back from his team mate.

“We finished in second for the day, which was a great result and showed we have the pace. It was very close between Adrian and I, and we didn’t know exactly who would end up in third. Adrian had two thirds, we had a second and a fourth, and when they went back and calculate the individual results over the weekend, Adrian pipped us. We’re ready for the next round though. The car is really good now, we and it’s much better than it’s even been,” said Sullens.

“Today really solidified all we have learned in the car. We drove hard, the car is great, and none the less, it’s great to see Citroën on the podium,” said Barkley.

Leading in to Round 3 of the East Coast Bull Bars Australian Rally Championship, Coppin and Batten are sitting in third, with a mere 9 points separating them from second place holders Scott Pedder and Dale Moscatt. Sullens and Barkley follow behind in a close fourth. The next round of the championship will see competitors take to the International Rally of Queensland in June.