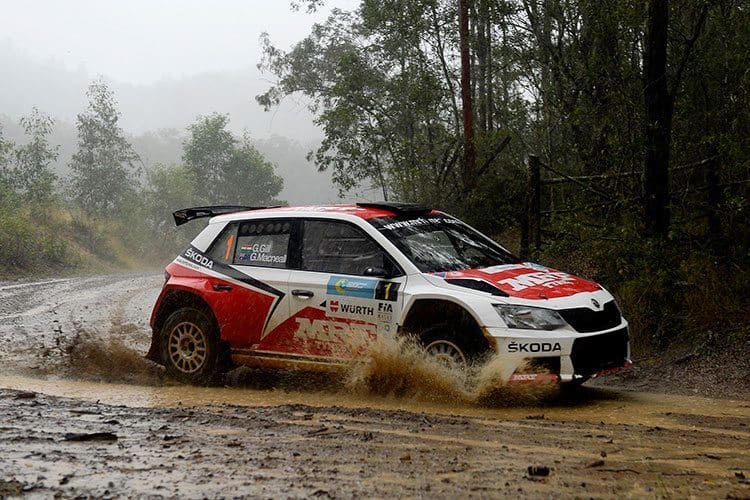 Gaurav Gill has emerged victorious after a dramatic end to the second round of the Asia Pacific Rally Championship (APRC), held at the International Rally of Queensland in Australia’s Sunshine Coast this weekend.

With heavy overnight rain, which continued during the late-morning, rally organisers had to cancel the final four stages due to safety concerns, although it didn’t affect Gill’s position as he had already built up a substantial lead of 1 minutes 59 seconds over team-mate Fabian Kreim.

Gill, of India, won all 13 stages in his Team MRF Skoda Fabia R5 at the event and said: “It was quite a challenging rally, quite difficult with the conditions changing all the time. But yeah, we got a good setup in the morning on Sat, and pushed a little bit [to build up the lead].

“The MRF team did exceptionally well. It was really difficult for everyone as the conditions were so harsh but we were lucky to have no dramas.”

Team-mate Fabian Kreim of Germany, who finished in second, was ecstatic over another podium finish in his first season of gravel rallying and during his visit visit to Australia.

On his return to the service park, Kreim said: “It was another really good experience for us… we are always learning. The speed we had was good, especially in the first stage [SS9] because there was no mud.”

Rounding out the podium in third was New Zealander Michael Young in his Cusco EZY Racing Subaru Impreza.

“It is a really good result for us. We made the wrong tyre choice on Saturday morning but it all worked out in the end,” said Young.

“It’s always hard going against the [Skoda] R5 cars but I think we showed what we’ve got.”

Local driver Nathan Quinn finished fourth, after suffering a boost issue on day one, followed by a blown driveshaft during the first stage of Sunday ending his chances of a podium place.

“We only just made it! It was a pretty embarrassing rally for us but we’re glad to make it.”

Mark Beard, the only other Australian competitor in the international field, finished in seventh overall behind the wheel of his naturally aspirated Subaru Impreza RS.

Rounding out the top APRC cars was Sanjay Takale of India, in a Cusco-prepared Subaru Impreza. After taking a short break from the APRC last year, Takale was just happy to finish this tricky round.

“We finally finished! We had some problems but I think that’s the character of the event. It’s dry, wet, slippy and very difficult terrain and you have to always be on the ball, as it can catch you off guard easily. I’m just very happy to be here because finishing this rally is a big challenge,” said Takale.

The Pacific Cup, contested over the New Zealand and Australian rounds, was also awarded at the podium ceremony in Australia and was won by Fabian Kreim and co-driver Frank Christian.

The next round of the APRC is new venue for 2016 at the China Rally, held in Zhangye, West China which sits near the Mongolian border.