Time for Kubica to step up WRC form

Robert Kubica is one of the most talked about drivers in the WRC, and after making the switch from Formula One to rallying, he should be!

His first season in a World Rally Car has been somewhat disappointing, however, this weekend’s Rallye Deutschland may change that run of poor form.

Prior to his rallying ventures, gravel was foreign to the 29 year-old Kubica. Most of the WRC season so far has been exactly that – gravel.

Kubica started the season off with a bang in the difficult Monte Carlo Rally, surprising most of us by taking the first two stage wins of the season. Unfortunately for the Lotos M-Sport World Rally Team driver, it has been downhill from there.

The only shining lights of the season have been his performances in Argentina and Italy, where he recorded sixth and eighth places respectively. It’s fair to say that he will be looking forward to returning to tarmac.

The Pole gained some valuable tarmac experience in the Fiesta WRC last month, when he won his first event in the car. That experience must give him some confidence ahead of this weekend’s rally.

Kubica and co-driver Maciek Szczepaniak have had troubles with consistency all season. Finding the perfect mix of speed and caution has troubled him. Or is it the lack of experience on gravel? 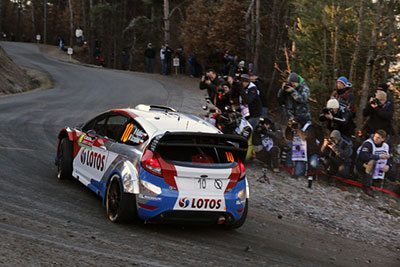 Possibly the switch from the WRC 2 category to the big time has been too big a jump for him? Crashing out multiple times this season would not have impressed M-Sport boss Malcom Wilson.

Kubica needs to show consistency and speed on his preferred surface to prove his doubters wrong. If he can do this, it will go a long way to securing him another drive for the 2015 season.

Luckily, the tarmac is here, and the second half of the year looks a lot more promising for Kubica. He needs to show that he has the speed to compete at the top level on tarmac against the likes of Ogier, Latvala and Neuville.

To that end, Kubica is confident.

“In Monte-Carlo we had some mixed conditions with quite a lot of tarmac, but Germany is more typical with very narrow and twisty asphalt roads,” Kubica said this week.

“We've done some tests and the feeling on tarmac is quite good. I think that we are well prepared.

“Some people have high hopes when it comes to my result, but I think we have to be realistic. It will be a difficult rally. We will just try to do our own rally and remember how tricky these stages can be,” he said.

Can he drive well over the course of the weekend and post a top five, maybe even a top three result? Only time will tell.