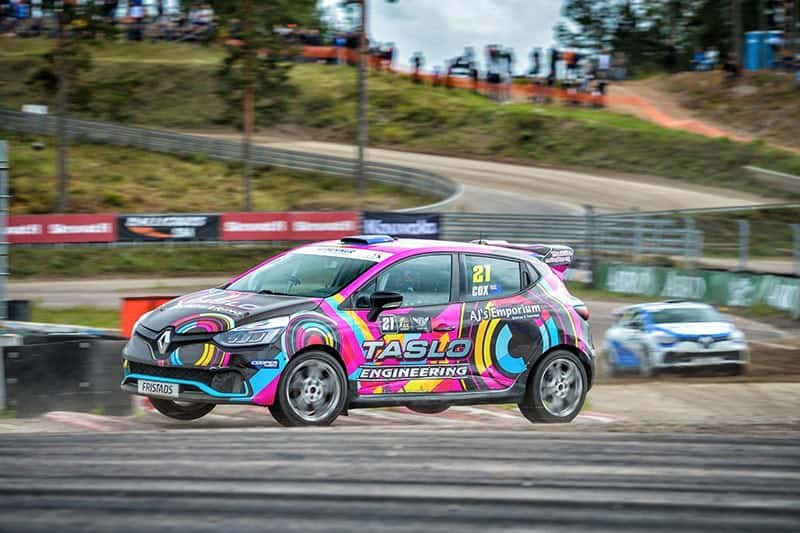 Kiwi driver Sloan Cox achieved some of the results he hoped for at the most recent round of the RX Academy in Finland but missed his core goal of qualifying for the final.

There was no lack of determination from Cox and, in fact, he looked to be on track for a strong performance at the fourth of the five RX Academy events which was part of the Kouvola Rallycross Festival running 25-26 August.

The Rotorua-based driver won the first qualifying race from second place on the grid and set the fastest lap time, putting him on pole for the second qualifier. Third quickest in the combined qualifying times, Cox was in a good position going into his semi-final race on the 1.06km Kouvola circuit which features 58% tarmac and 42% gravel.

However, an on-track incident with another RX Academy driver in an identical Renault Clio RS RX car saw Cox black-flagged from the race which essentially disqualified him from the race results and therefore from qualifying for the final.

“We felt the black flag for contact was a controversial call from the stewards,” said Cox from Helsinki as he began his trip home, “especially when there was other contact in that race that wasn’t penalised the same way, but ultimately that’s motorsport and there wasn’t anything we could do about it.”

From Thursday’s optional test day and Friday’s practice sessions, Cox said he was feeling much more relaxed in the car. “It was where I wanted to be and I knew what I needed to work on to improve. We were all very close in the qualifying races, within a second of each other with lap times.”

The close, door-to-door racing format of rallycross is becoming more familiar to the former rally driver. “I certainly learnt a lot over the weekend about rules and racing lines,” added the 26-year-old.

“There were plenty of positives to take away, despite not making the final. I definitely showed more speed, and was consistently faster. I was third quickest or faster during most of the practice sessions and qualifying races. I had tidy runs through the joker laps and it was encouraging to have the SET Promotions team, which runs the RX Academy, talk highly of my performance.”

Cox has no doubt the time he invested back in New Zealand, turning his Evo X rally car into front-wheel-drive contributed to improving his pace in this new form of motorsport.

“When I’m back in New Zealand, I’ll keep working on my own driving. There’s a gap until the final RX Academy round on 7 October at Tierps in Sweden, during which I’ll also be aiming to defend my Ashley Forest rally sprint title toward the end of September in the Taslo Engineering hillclimb car.

The past few days have been tough for Cox on a personal level with fellow RX Academy competitor and now good mate Troy Dowel being diagnosed with acute leukaemia late last week.

“Troy, his father Justin and Neville Matthews have helped me out so much this year,” said Cox.

“I’m really grateful for their help and we’ve had a lot of fun travelling together and having that classic Aussie-Kiwi battle on and off the track. This is really serious for Troy and I wish him all the best with his treatment. I can’t wait to be racing with Troy again soon.”