Mt Baw Baw, situated in Gippsland Victoria, put on a spectacular display of its natural beauty at the Mt Baw Baw Sprint, the penultimate round of the AASA Australian Tarmac Rally Championship.

Crews were met with beautiful clear blue skies, stunning views and a magnificent sunset on the Saturday night as they tackled the demanding 210 competitive kilometres on one of the most exacting tarmac rallies in Victoria.

Keith and Alex Morling, driving a 1979 Ford Escort, were leading Peter Gluskie and Samantha Winter of GluskieWinter Motorsport, who in their 1985 BMW, were ahead of the 1974 Porsche 911 RS of Mark Clair and Lee Harper.

Over the summer break, the Morlings made suspension changes to the Escort to find a few extra seconds of pace, while Gluskie and Winter installed a new and more powerful motor.

The stage was set then, for an epic battle on the mountain, and they didn’t disappoint.

In the early stages on Saturday, the Escort, BMW and Porsche traded stage wins, but by the close of competition on the first day, the fight for the lead was a two-way battle between the Escort and BMW. Third had become a contest between the Porsche and the 1981 Holden Commodore of Michael and Stacey Reynolds.

Everything however, would change on Sunday.

The Commodore was first to fall foul of the twisty bitumen, with an off on Special Stage 13 bringing an end to their weekend.

Mark Clair and Lee Harper were next. With only two stages to go, they hit a hole on the inside of a corner damaging their suspension, and like the Commodore, they were out.

The battle for the rally win in the Classic competition came down to the final stage - a race to the end between the Morling’s Escort and the BMW of Gluskie.

However, early into the final run up the Mountain, the Escort broke a lower control arm and was left stranded, handing victory to the BMW.

In the Outright classification, competition was equally as intense, and like the Classics, would come down to the final couple of stages.

By the close of competition on Saturday night, the ageing 2005 Mitsubishi Evo of Danny Traverso and Jason Page held a narrow 27 second lead over Jeff Morton and Daymon Nicoli in a 2017 Lotus Exige, with the GT3 Porsche RS of Tim Hendy and Julie Winton-Monet a further 13 seconds behind in third.

The dark horse of the day was the 2002 HSV GTO driven by Dean Lillie with Steve Glenney in the co-driver’s seat. They were only one minute and twenty seconds off the outright lead and sitting in fourth overall.

The 2015 Nissan GTR of Angus Kennard and Ian Wheeler was a further one second behind the GTO in fifth.

But so close was the competition at the top, that Craig Dean and Mary Hughes in the 2015 Shelby GT Mustang were only one second behind the GTR in sixth. 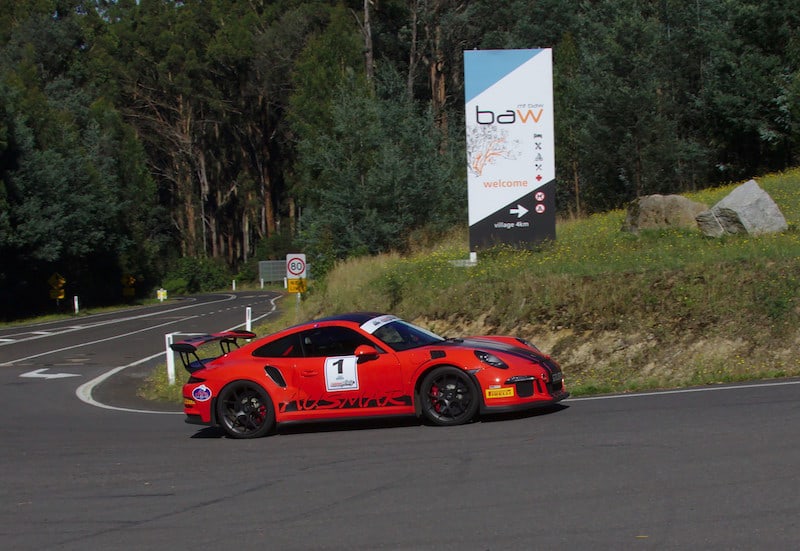 Tim Hendy's GT3 was one to watch.

The results on Saturday night could have easily turned out differently. Two special stages had to be cancelled to stay within the road closure windows.

Unbeknown at the time, the gear linkage on the Lotus had come undone. If the stages had gone ahead, it would have undoubtedly fallen off, thereby rendering the Lotus out of contention.

Sunday became a three-way tussle between the Lotus, Porsche GT3 and the Mitsubishi Evo of Traverso and Page.

The outcome, one of the closest finishes in recent times.

As crews enjoyed a well-earned Sunday lunch stop, only nine tenths of a second separated the Lotus in third spot from the second placed Porsche GT3.

The leaders, Danny Traverso and Jason Page, were a mere forty-five seconds further up the road.

Like the Classic competition, everything came down to the final few stages of the event, but, unlike the Classics, driver error and mechanical issues had no part to play in determining the outcome.

After what was a marathon battle, victory went to Danny Traverso and Jason Page in the Evo, beating second placed Tim Hendy and Julie Winton-Monet by a slender 23 seconds.

Third placed Jeff Morton and Daymon Nicoli, in the Lotus were just a slim 21 seconds further behind the Porsche GT3.

The flying HSV GTO of Lillie and Glenney finished fourth outright, just pipping the 2015 Nissan of Kennard and Wheeler in sixth.

The Shelby Mustang of Dean and Hughes was another victim of the infamous Porcupine Creek stage, the final run of the day.

They clipped a fallen branch which was on the side of the road, destroying a tyre and rim, ending their rally chances.

‘The competition over the weekend has been fierce,’ said Danny Traverso.

‘We've pushed each other hard right to the final stage and you can’t ask for anything better than that.”

“This was the first outing for both the Lotus and Porsche, so staying in front is only going to get tougher as they develop their cars,” he concluded.

The final round of the 2019 AASA Australian Tarmac Rally Championship, the Lake Mountain Sprint, will be held at Marysville over the weekend of 23 and 24 March 2019.