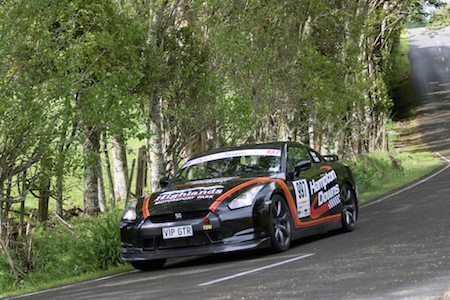 It’s a case of a return to its roots for the next event of the 2016 Targa tarmac motor rally calendar, the two-day Targa Rotorua returning to the southern Waikato and eastern Bay of Plenty regions over the May 14-15 weekend.

A two-day Targa Rotorua event on or near Queen’s Birthday weekend has been a popular fixture on the Targa New Zealand calendar for a number of years. However for the past two, the event was incorporated into three-day Targa North Island (2014) or Targa Bambina (2015) events from Auckland to Rotorua via Whitianga.

This year both the Bambina event (based at Pukekohe and held in early March) and the Rotorua one have reverted to a central base/two-day format, albeit in the case of the Rororua one, with a twist.

In previous two-day events the first day of competition has usually been in and around Rotorua and the second across the Kaimais in the Waikato.

This year the 60-strong competition and 20-strong Targa Tour field crosses the Kaimais for stages between Putaruru in the south and Matamata in the east before returning to Rotorua on Saturday evening, then completes a full day in and around Rotorua on Sunday.

“It’s all about mixing things up and making each event unique,” says Event Director Peter Martin. “In this case it also makes sense from an organisational point of view.

“When we used to run Rotorua as  a two day there was always a long transport stage back across the Kaimais from the Waikato at the end of the event which often meant some of our early finishers had to wait hours for prize giving before they could pack up and think about heading home.

“This time the last stage of the day is literally just up the road so the first cars should arrive back in town between three and four (pm) rather than closer to five.”

In other changes there is a new event HQ and start/finish (at the Rydges Rotorua hotel on Fenton St) and a new way of labelling the stages.

“Before, a driver or co-driver could say, ‘right, Waikite Valley, yep I know it from 2012’ or whatever, ” says Martin. “Now neither has that luxury. It’s just another way, if you like, we can level the playing field.”

All up there are 313.6kms of closed special stages, and 476.1kms of transport stages this year with the longest stage – the first one on Sunday morning – the 38km Alfa Romeo south of Rotorua, and the shortest, the 7.21km Great Wall near Rotorua later that day.

The big news on the entry front is the return to local Targa competition of five-time former Targa New Zealand (main event) winner Tony Quinn and co-driver Naomi Tillett. Together the pair notched up four consecutive Targa NZ crowns in business magnate and motorsport entrepreneur Quinn’s Nissan GT-R35 before the local Mitsubishi Evo pairing of Glenn Inkster and Spencer Winn assumed the mantle of combination to beat when the main Targa event was held in the South Island in 2014.

Inkster and Winn have since successfully defended that win back in the North Island last year and won the season-opening Targa Bambina event in Pukekohe in February. But this year they have to miss the Rotorua event because of a conflict with their renewed gravel rallying schedule.

This opens the way for Quinn and Tillett in the Nissan GT-R35, and 2013 Targa NZ winners Martin Dippie and Jona Grant from Dunedin in Dippie’s late-model Porsche GT3, to return and vie for overall as well as category honours.

Also back for this event is former Rotorua man Mike Lowe with co-driver Phillip Sutton  in Lowe’s  new Fiat Abarth Assetto Corse, the 2009 model he bought two years ago to finally replace the 1964 model Fiat Abarth Berlina Corsa in which he contested a record 20 main Targas (as well as numerous Rotorua ones).

Scrutineering and sign-on for competitors is on Friday May 13 at VTNZ in Marguerita Street in Rotorua with Leg One of the event starting at 8.00am on Saturday morning from Rydges Rotorua on Fenton Street. During the day on Saturday there will be service stops in Putaruru and Cambridge before a return to Rotorua where after a car wash and end of day service the cars will go into parc ferme at Rydges hotel.

Sunday’s Leg Two start is at 8.15 am at Rydges with a morning service at Ngakuru School south of the city then lunchtime, afternoon tea and final event services at Rydges Rotorua before the first car is expected to cross the finish line at 3.40pm.

For more information go to www.targa.co.nz