A classic rally, putting both man and machine to the test: Volkswagen lines up at the Rally Argentina with its sights set firmly on victory. Defending champions and World Championship leaders Sébastien Ogier/Julien Ingrassia (F/F), their Volkswagen team-mates Jari-Matti Latvala/Miikka Anttila (FIN/FIN) – currently second in the overall standings – and Andreas Mikkelsen/Mikko Markkula (N/FIN) face 405.10 kilometres of special stage at the fifth round of the FIA World Rally Championship (WRC).

The 315-hp Polo R WRC must conquer changes in elevation of over 1,500 metres, vast stretches of coarse gravel, water crossings, and numerous winding sections. The three works duos are certainly not lacking motivation, and will be cheered on frenetically by the thousands of fans lining the 14 special stages.

“The Rally Argentina is one of the highlights of the World Rally Championship,” said Volkswagen Motorsport Director Jost Capito. “It features very long special stages, with big changes in elevation, winding sections, gravel, and water crossings – the drivers, co-drivers and cars need to be at their very best again. We have achieved a lot this season, which has led many to view us as favourites. However, when you pull up at the start of the first special stage, everyone starts from scratch. Only those who keep their concentration throughout all three days of the rally, do not overwork their material and make the fewest mistakes will stand a chance of winning. That goes for the drivers, engineers and the entire team. There is no question about it: we want to win. However, we are also well aware that there are no gifts in sport. We are looking forward to the coming challenge and know that anything is possible in rallying.” 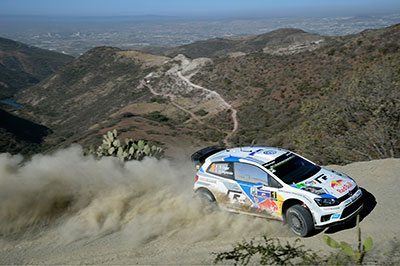 The Rally Argentina attracts huge numbers of enthusiastic and knowledgeable fans to the area around Córdoba, the second-largest city in Argentina, every year. And wherever there are more than two Argentinians in one place, you can guarantee there will be a barbecue. For the drivers and co-drivers in the World Rally Championship, this generates a unique atmosphere, akin to a huge fair. Spectators pack the route along the special stages, unpack their trusty barbecues and spur their stars on to produce their very best. For the first time for almost a decade, a new winner will be crowned: none of the WRC drivers starting the event in 2014 have won the Rally Argentina in the past. Only one person knows how it feels to stand on the very top step of the podium in Argentina: Mikko Markkula, co-driver of Volkswagen driver Andreas Mikkelsen. Markkula won the 2010 Rally Argentina alongside Juho Hänninen in a Škoda Fabia Super 2000. However, the Rally Argentina was not included on the WRC calendar back then.

The advantage definitely lies with those who lined up here in 2013: ten of the 14 special stages at the Rally Argentina are identical to last year. A further two follow virtually the same route as in 2013. In fact, 84.62 per cent of the 2014 route also featured on last year’s itinerary. However, this does not make the job any easier for the driver and co-driver. The “El Cóndor” special stage is a genuine classic and world-renowned. The stage guarantees a wide range of different challenges: tight hairpins are followed by fast, expansive corners. Then there is the unique weather encountered on “El Cóndor”, parts of which are often enshrouded in thick fog while the sun shines brightly in others. When the drivers return to “El Cóndor” for the second time in 2014, it will form the Power Stage, with bonus points up for grabs for the fastest three.

When the World Rally Cars accelerate to race speed at the start of “El Cóndor”, they also plunge from the highest point on the Rally Argentina into the valley below. While the Rally Mexico may be the roof of the WRC, the round in Argentina features the greatest difference in elevation, which in turn confronts the cars with a major problem. The engine management system must ensure maximum performance at the highest point of the rally on “El Cóndor” – 2,138 metres above sea level – and at its lowest point of just 620 metres above sea level, which is encountered just a few metres after the start of the “Amboy-Yacanto” special stage. The difference in elevation of 1,518 metres is the largest on the WRC calendar.

Three winning streaks and Argentina – a special place for Volkswagen

Volkswagen and Argentina – a loving relationship. Two production plants, just short of 90 branches, and a market share of about 25 per cent in the automobile sector: the Volkswagen Group has strengthened its position as market leader in Argentina in recent years. And Argentina is Volkswagen country when it comes to sport too: the brand won the Dakar Rally with the Race Touareg in 2009, 2010 and 2011, when the event started and finished in Argentina. Volkswagen’s very first victory on the marathon rally scene came back in 2005 at the “Rallye por las Pampas” in Argentina. And the unbeaten record continued during preparations for the World Rally Championship project with the Polo R WRC in 2012, when Ogier/Ingrassia won the S2000 category (now WRC 2) in a Fabia Super 2000 from Škoda, which belongs to the Volkswagen Group.

However, another winning streak was even more impressive in 2013: record World Champion Sébastien Loeb (Citroën) triumphed in Argentina for the eighth time in a row last year, although ten of the 14 special stages went to the Polo R WRC. The number eight also plays a role for Volkswagen this time around. Should Ogier/Ingrassia, Latvala/Anttila or Mikkelsen/Markkula win for Volkswagen in Argentina, they would continue an equally impressive winning run – nine wins in a row for one manufacturer. Victories in Australia, France, Spain and Great Britain in 2013, and wins in Monte Carlo, Sweden, Mexico and Portugal this year, have seen Volkswagen equal the record previously held by Citroën.

The Volkswagen duos are once again confronted with what is becoming a familiar challenge: opening the route on the first day of the rally. The regulations stipulate that the World Championship leader must start first – in this case Sébastien Ogier. He is followed by another Volkswagen driver, in the form of Jari-Matti Latvala. Currently fourth overall, Andreas Mikkelsen will be the fourth man to pull up to the starting line on the first five special stages.

Quotes ahead of the Rally Argentina

Sébastien Ogier, Volkswagen Polo R WRC #1
“We all spent time on Sardinia preparing for the Rally Argentina. The sandy surface there is similar to what we will encounter in South America. Although the surface in Argentina is a little softer, we learned a lot from the tests. I have never won the Rally Argentina. I came close in 2011 and just missed out last year too. That makes me all the more determined to win in Argentina. The itinerary is almost identical to 2013, which could be a slight advantage for us. Despite this, a gravel rally can change dramatically from one year to the next. For this reason, we will be particularly focussed during the Recce, in order to include the many minor changes in the pace notes.”

Jari-Matti Latvala, Volkswagen Polo R WRC #2
“I am looking forward to Argentina. I claimed my first podium for Volkswagen there last year. The rally suits my driving style, but is not easy for the drivers. If you’re not careful, you can hit a large stone as soon as you push yourself to the limit – particularly on the second loop. As such, you always have to give yourself a little breathing space, in order to be able to react quickly if necessary. I would be very happy with a podium finish. Compared to last year, the majority of the special stages are unchanged. There are only minor alterations. Only ‘Mina Clavero’ on the final day will be driven in the opposite direction to last year. That is completely new to us, and will be a challenge. We did not have the best of times in Portugal. The key now is not to make any more mistakes and perform as consistently as we did at the first three rallies of the year.”

Andreas Mikkelsen, Volkswagen Polo R WRC #9
“It feels good to travel to a rally that I already know very well from the previous two years. I was involved in a long running battle with Sébastien Ogier in a Škoda Fabia Super 2000 in 2012. Last year we pushed the car a bit too hard in the quest for fast times, but were still able to fight our way back into the points on the final day. While individual results were not necessarily the priority in my first season in the Polo R WRC, I would like to improve this year. In terms of Argentina, that means completing the rally without any major incidents and finishing as near the top as possible. The closing Power Stage will quite literally be a highlight: the start of ‘El Cóndor–Copina’ is the highest point on the Rally Argentina. From there we plunge down winding roads into the valley. I am particularly looking forward to that, as it demands courage and precision at the wheel.”

… the Rally Argentina was held for the first time in 1980? Back then, the province of Tucumán and the “Automovol Club Argentino” were the hosts. The winners of the inaugural event were Walter Röhrl/Christian Geistdörfer (D/D) in a Fiat 131 Abarth.

... the current president of the International Automobile Federation FIA, Jean Todt, contested the 1981 Rally Argentina as the co-driver to Guy Fréquelin in a Talbot Sunbeam Lotus?

... the 2010 Rally Argentina was held as a round of the Intercontinental Rally Challenge (IRC) and not on the WRC calendar? Victorious co-driver back then: Mikko Markkula, in the passenger’s seat of a Škoda Fabia Super 2000 alongside Juho Hänninen. Markkula has been reading the pace notes for Volkswagen driver Andreas Mikkelsen since 2013.

... Volkswagen Group brand Audi claimed two victories in Argentina in the 80s? The winning car on both occasions was the legendary Audi quattro A2. Hannu Mikkola/Arne Hertz (FIN/S) triumphed in 1983, with Stig Blomqvist/Björn Cederberg (S/S) victorious in 1984.

The number for the Rally Argentina: 17

Sébastien Ogier/Julien Ingrassia line up with a very special chassis at the Rally Argentina. The Polo R WRC with the internal number 17 and official number plate WOB-VW 369 made its debut at the Rally Germany in August 2013. The rough beginning at Volkswagen’s home event was followed by an irresistible winning streak: the number 17 chassis triumphed in a diverse range of conditions at last year’s Rally France and in Monte Carlo and Mexico this season. It was with this very chassis in France that Ogier/Ingrassia secured the Driver and Co-Driver titles in the FIA World Rally Championship (WRC).