Sebastien Ogier heads a Volkswagen clean sweep of the podium positions after today’s opening leg of Rally Sweden. The world champion is 5.8sec ahead of Andreas Mikkelsen after a see-saw day in which they swapped the lead on three occasions. Jari-Matti Latvala lies third, a further 6.4sec behind, all three drivers in Polo Rs.

“Starting first on the road is never an easy job and I would have settled immediately to be in the top three tonight so I’m really happy with the day,” said Ogier, who won three stages.

Mikkelsen led after last night’s super special stage in Karlstad but as today’s opening leg headed from Sweden into Norway, Ogier moved ahead. His lead climbed towards 10sec until Mikkelsen fought back.

He regained the upper hand during the second pass of the Norwegian stages, but eased off in the final test to preserve his tyres.

“We could have chosen to go with new tyres now, but then we would need to go with used tyres tomorrow morning. I preferred to lose a little time here and have good tyres for the first stage tomorrow. It would have been nice to fight for the lead overnight but it’s a long rally and that’s what we really need to think about,” he said.

Mikkelsen was inspired by fighting for the lead in front of his home fans. “When you see so many Norwegians cheering you on, you want to do well!” he said.

Latvala had a mixed day. At times his pace was a match for Ogier, while at others he cut a disconsolate figure, shaking his head at what he perceived to be poor driving.

Performance of the day came from Ott Tanak. After more than 12 months away from the WRC, the Estonian returned in style in his Fiesta RS. He won one stage and is just 2.6sec behind Latvala in fourth.

Mads Ostberg struggled for confidence in his maiden outing in a Citroen DS3 on the loose. The Norwegian made some changes ahead of the afternoon stages and his demeanour improved. He is tied in fifth with Mikko Hirvonen’s Fiesta RS. 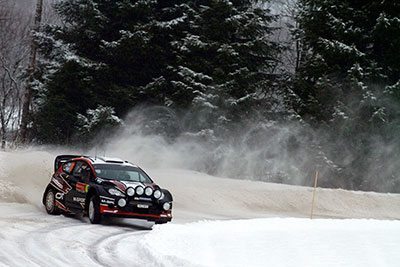 Thierry Neuville and Juho Hanninen are seventh and eighth after a more successful opening day for the Hyundai team than they experienced at Rallye Monte-Carlo. Pontus Tidemand and Kris Meeke, competing on a full snow rally for the first time, round off the top 10.

Henning Solberg was eighth until a last stage puncture dropped him to 13th, just ahead of Craig Breen who endured a tough World Rally Car debut. A misfire in fourth and fifth gears was a constant handicap and when he lost concentration he briefly buried his Fiesta RS in a snow bank.

Martin Prokop did the same in the opening stage and the Czech driver lost three minutes.

Conditions were not as bad as drivers feared. While the roads were soft and gravelly in places, there was a solid ice base in others and there were no complaints about tyres shedding studs.

Tomorrow’s action is based east of the Hagfors service park. Drivers cover two identical loops of four stages before a repeat of Karlstad’s super special stage – a total of 117.46km of competition.