Chris West showed he's still a force to be reckoned with.With times from six of today's eight stages through the centre of the North Island official but the rest still provisional, West and Cobham had a lead of just over a minute on 2013 and 2014  event winners Glenn Inkster and Spencer Winn (Mitsubishi Evo 8) with Leigh Hopper and Michael Goudie in a Subaru WRX third, 2013 Targa NZ winners Martin Dippie and Jona Grant (Porsche GT3 RS) fourth and five-time former winner Tony Quinn and his co-driver Naomi Tillett fifth.

West and Cobham were quickest through four of the six with Tony Quinn and Naomi Tillett winning the first outright and Andrew Simms and Craig Vulawalu (Mitsubishi Evo 10) the final one of the day.

Another experienced gravel rally ace, Regan Ross and co-driver Shaun Howie from Kaikoura dominated the Metalman Classic class in a Ford Escort RS1800, topping the time sheets in five of the six stages with verified times and ending up sixth overall. 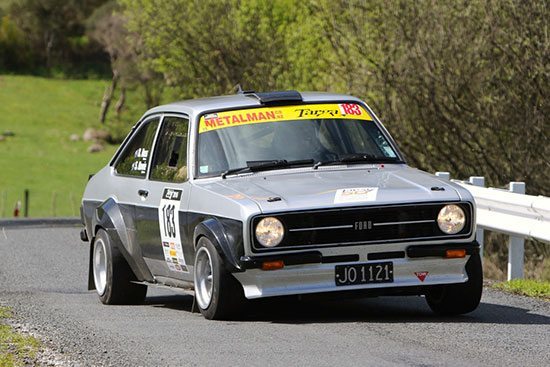 Regan Ross holds sixth place in his Ford Escort RS1800.Out before the event even started this year, unfortunately, was Auckland event stalwart Clark Proctor with a blown engine the day before his Nissan turbo-powered Ford Escort was due in Taupo.

High-profile circuit owner Tony Quinn and co-driver Naomi Tillett were also lucky to have Quinn's four-time event-winning Nissan GTR-35 on hand when his team ran out of time to have his new Porsche GT3 RS ready for the event.

Quinn and Proctor were two of five drivers inducted into the event's new Hall of Fame at the Giltrap Group Legends of Targa dinner at Wairakei on Wednesday evening.

The other drivers were Barry and Chris Kirk-Burnnand, and Mike Lowe. Five event officials were also honoured with Legends of Targa status. They were event founder Mike John and event stalwarts Dennis Green, Jill Greenland, James Logan and Adrian Mason.

Tomorrow (Friday) Leg two of the 2016 event takes the field from Ohakune to Palmerston North, Leg three on Saturday from Palmerston North via the Gentle Annie road to Havelock North, before Sunday's final leg in and around Hawke's Bay, complete with ceremonial finish back in Havelock North and prize giving that evening at the Hawke's Bay Opera House in Hastings.