Whatever happened to: Jump bars, Tirfor winches and ‘eye brows’

The development of a modern gravel rally car incorporates a number of key components that are absolutely essential if safety and success are desired. Things like 45 metres of chrome-moly tubing bent to form a cocoon-like roll cage within the vehicles, carbon-fibre wrap-around seats, 5-point safety harnesses and the best suspension money can buy are probably top of the list. In the 70s, during the halcyon days of the sport, the specification sheet was much different and included a number of components and modifications that today’s rally competitors would probably not even be able to identify. Admittedly, special stage rallying was more of an endurance test in the 70s, as opposed to the outright speed test that it has become today. In 1978, when planning a rally car build for the nature of events on the calendar at that time, strength and durability were a key part of the strategy, but more so because the roads selected were often much rougher and sometimes even impassable if rain reared its ugly head. Typical risks associated with stage rallying back in the 70s included being bogged in a wet crossing or on a lonely muddy road, which resulted in the crew having to find a way to un-bog themselves and continue on their way. While a time loss may have been inevitable under those conditions, it was generally the same for everyone, and so losing minutes getting out of a sticky situation carried the same risk and outcome for all crews. 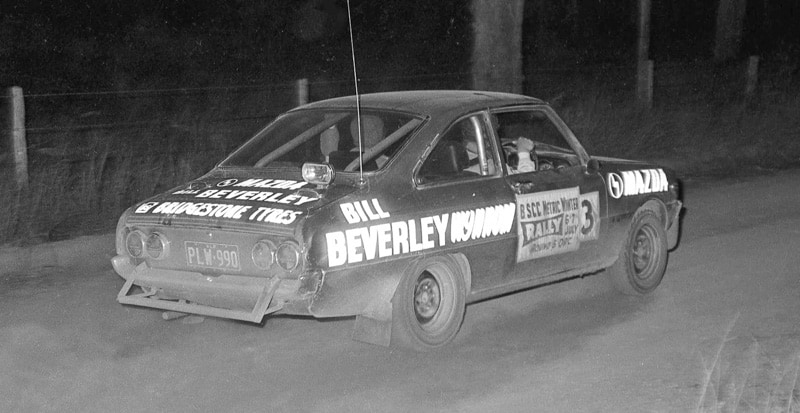 The 'jump bar' was an essential item on the rear of rally cars in the early days. Photo: Graham Ruckert

The ‘Jump Bar’ was a necessary bit of kit, and was installed by different means – but often used a standard towbar with added foot plates for the brave co-driver to stand on, in order to add weight over the rear axle, and hence, add traction. Accompanying the Jump Bar, of course, were the grab handles which may have been cupboard door handles screwed through the boot lid, or a length of seat belt webbing tied between the boot hinges and sitting outside the boot seal. The ride often became exciting when the car got traction and accelerated forward with a navigator hanging on for dear life, and the driver doing all he could to escape the muddy clutches of the bog. 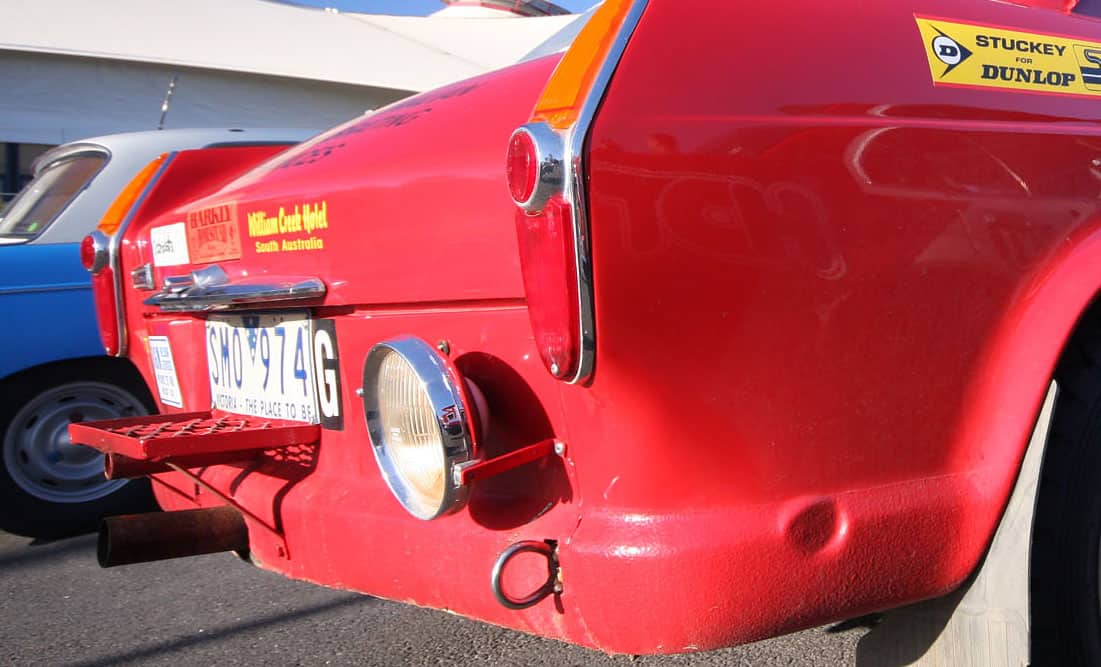 Standing on the rear of the car helped extricate it from a bog. Photo: John Doutch

A winch was often carefully fitted into the boot around the spare tyre and fuel tank, and the best winch to have was a Tirfor, with an accompanying 25-metre spool of wire cable. The Tirfor and cable probably added 20kg to the laden weight of the rally car. Whilst often singularly responsible for pulling a stranded car back onto a road, the Tirfor and cable sometimes caused a stoppage for following cars as the crew used whichever was the strongest and nearest tree to tie up to…. and often the cable stretched across the competing road to get the job done. 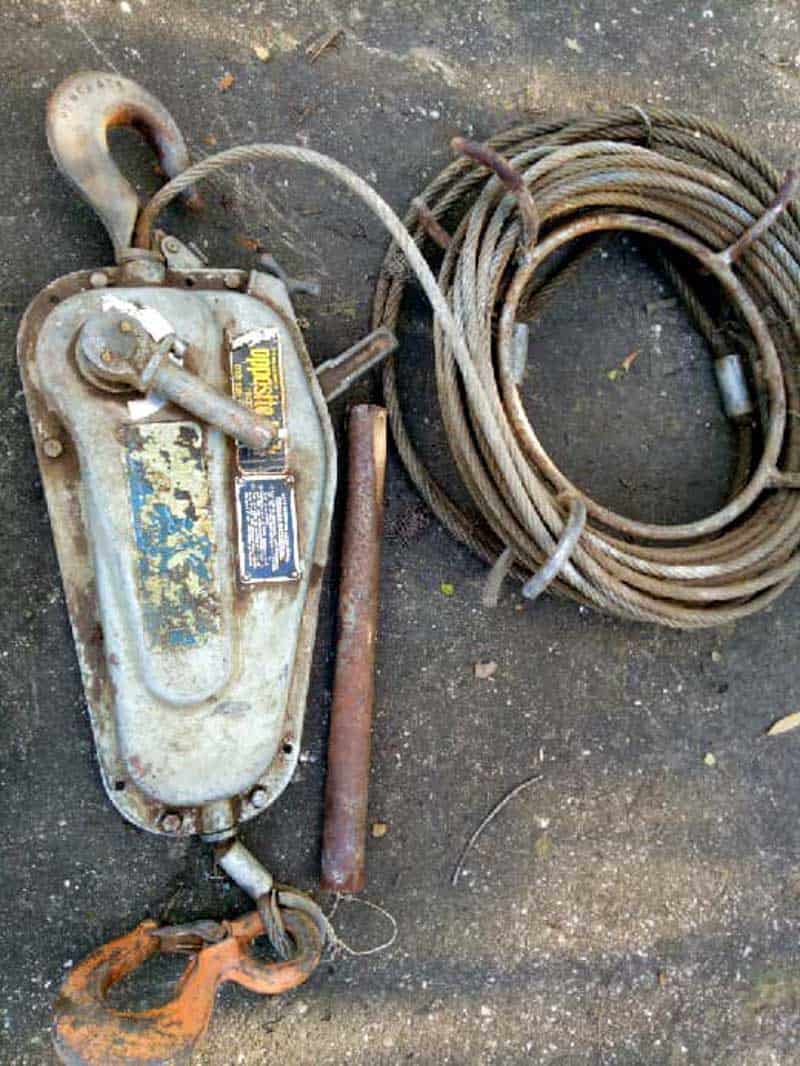 One of the more ‘modern’ tools sometimes carried in the late 70s was an exhaust-inflated jack-bag, intended to be slung under the car if bogged, then stick the tube on the exhaust and inflate the bag. This would lift the car sufficiently for mud to be dug out (with the shovel the crew often carried) or to stick logs and rocks under the tyres. 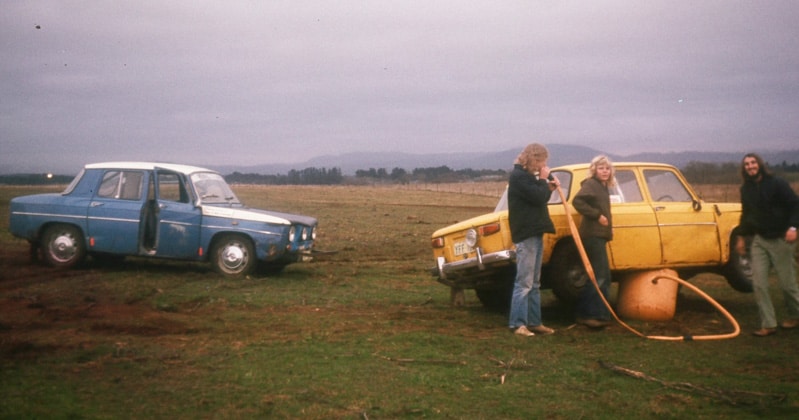 An inflatable jack bag had several uses on a wet and muddy rally. Photo: Allan Kelly

Over recent decades, night time rallying has also become a rarity, where once it was favoured to avoid the potential conflict where daytime users thought to venture into the forest. Even spotlights – synonymous with the concept of the sport – are perhaps not as essential as they once may have been. Lighting manufacturers like Cibie, Marchal and Hella were highly competitive in the past, and over many years the number of forward facing spotlights permitted by various local regulations dictated how far the driver could see, and how fast he or she was willing to drive. On most cars of the era, the attachment of a rear-facing small spotlight was equally important. An overshoot at night on a dusty road or into thick scrub was almost immediately followed by a quick flick of the switch on the dashboard to light up what was behind, and reverse out of the situation. Some were mounted on the rear bumper, while others took pride of place up high on the boot lid. Occasionally, a car suffering lost time as a result of their ‘off’ was caught on a stage by a following crew, only to be baulked by the spotlight still shining backwards down the road – the driver having forgotten to switch it off in the heat of battle! Given the propensity for rally organisers of the day to throw in wet crossings on the competitive route, ‘eye-brows’ were also de rigueur. 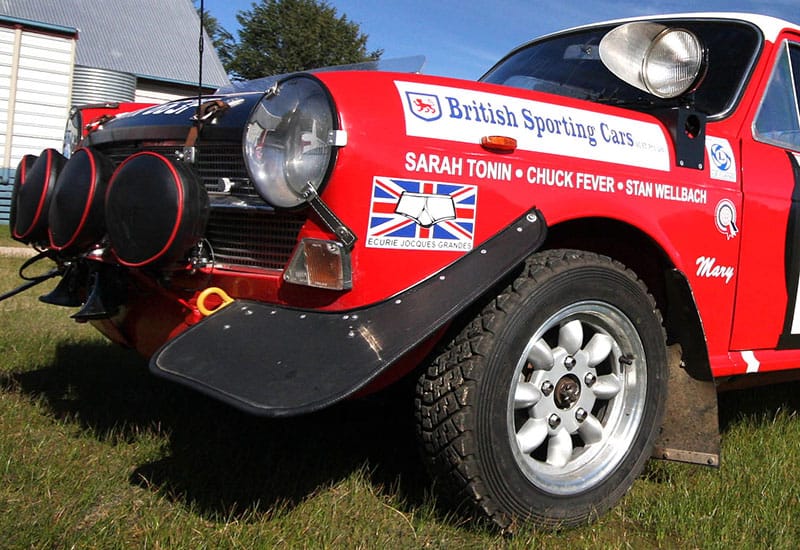 ‘Eye-brows’ were carefully shaped rubber flaps – essentially a forward facing mudflap – that did nothing for the aerodynamics of the vehicle, but did an amazingly successful job of preventing mud and water splashing up onto the windscreen, remembering that the 70s vintage wipers were adequate at best. Inside the car, the navigator of the day also enjoyed some basic equipment that is unlikely to be utilised today. 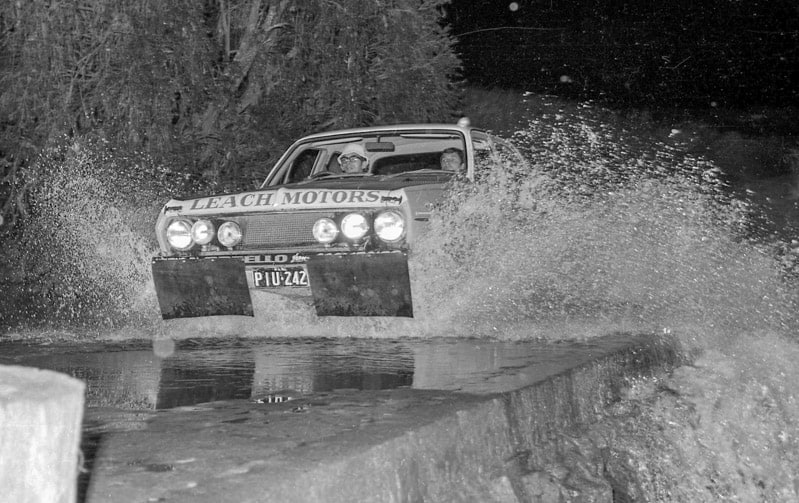 While modern cars rely upon digital distance measuring equipment, the ubiquitous Halda was the item of choice all those year ago. 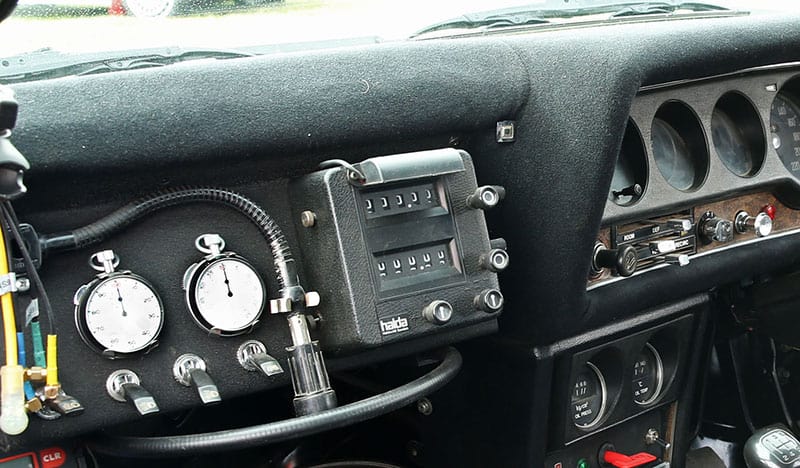 The popular Twinmaster Halda was the distance recorder of choice, while the adjacent map light helped the navigator read maps at night. Photo: John Doutch

To make map reading easier (yes Virginia, navigators actually used maps!!), the Rally Romer in various guises was usually tied by string around the neck. And to ensure that those same maps could be read clearly during the darkness of night, the long-stem map light was a must. 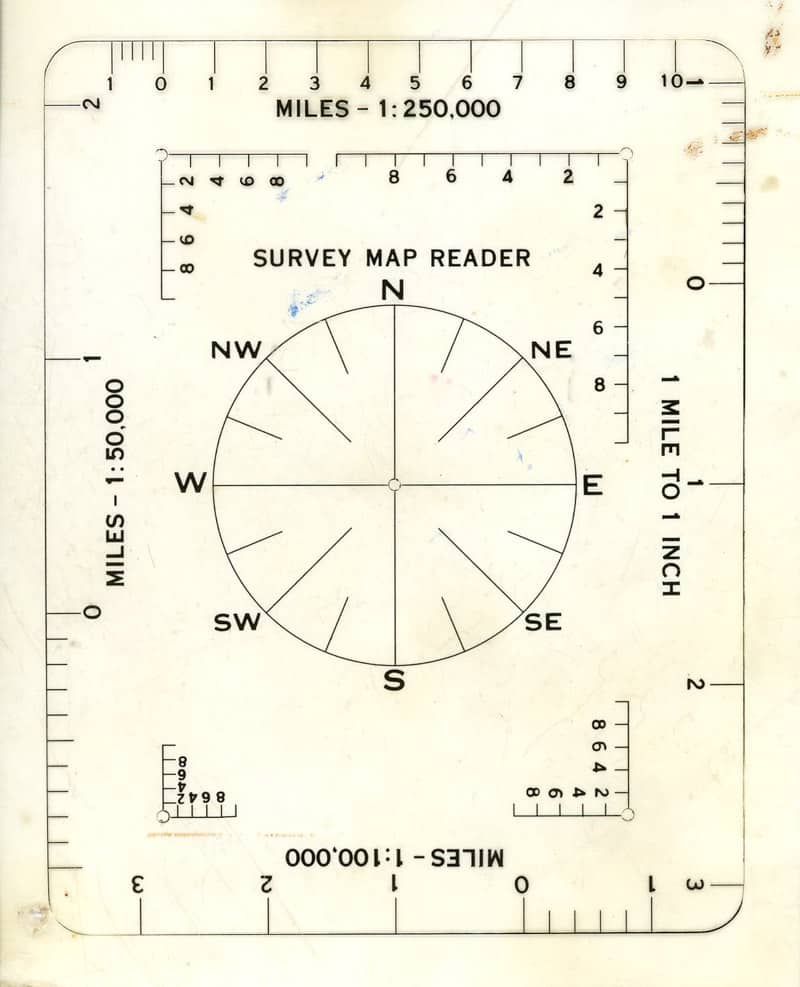 A small number of drivers liked their navigators to shield the work from their navigatorial environment with a black cloth curtain, strung between the driver and his passenger to minimise the light getting into his line of sight. 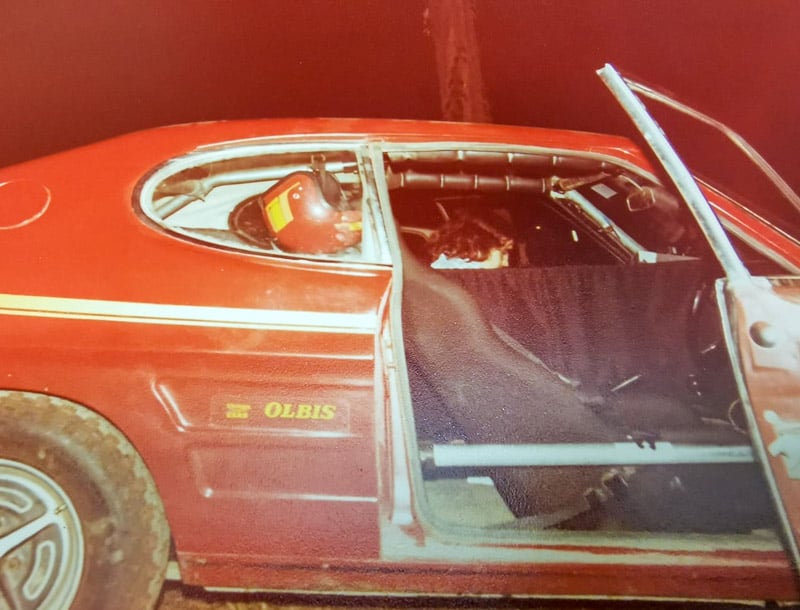 Behind the black curtain .... navigators and drivers were often separated. Photo: Greg Donald 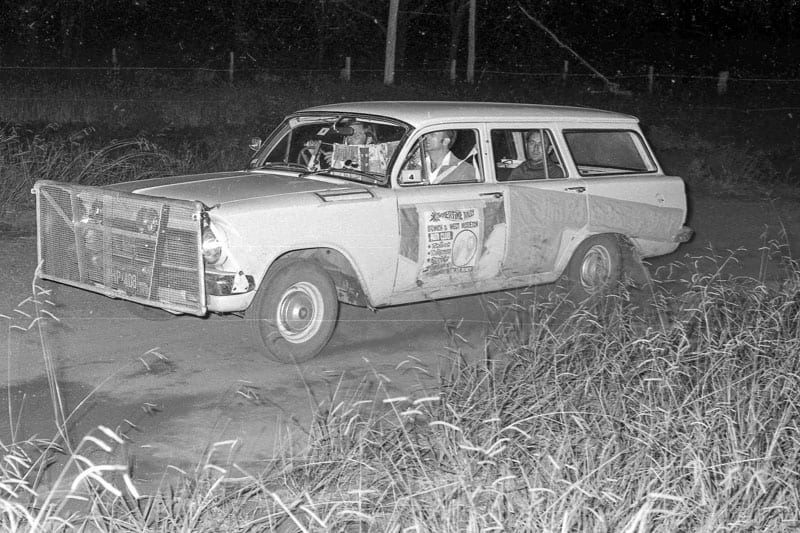 Many of the new generation of rallyists will see these unique accessories of the past on the growing number of replica rally cars of the 60s and 70s, and wonder in amazement at the innovations and simple solutions of the past.