Martin Holmes previews the eighth round of the 2017 WRC, which sees the traditional start of a different style of championship rally.

Gone for the rest of the season is the series of rough rallies, coming now are smoother or faster events – and Rajd Polski (30 June – 2 July) is one of the fastest events in the series. This will be the fifth time the WRC will visit the Mazurian lake district of northern Poland, being based at the picturesque inland tourist town of Mikolajki about 250km north of Warsaw.

It is to be the 74th time the event has been held, the event first being held in 1921, making this the second oldest WRC event behind Monte Carlo Rally. These days the event is held on gravel stages, with considerable organisational attention paid to spectator safely.

The entry list showed 49 crews with 17 World Rally Cars, 16 WRC2 cars - all R5s - and ten Junior WRC entries, a total of 46 registered championship competitors plus but curiously only three non-championship entries - with, for the second year running, no non-championship drivers from Poland itself.

The absence of fully private Polish entries is assigned to the preference by the top national drivers for competing on national championship events.

The big pre-event story was that Citroen Racing is “resting” Kris Meeke from this event after his long recent history of misfortunes and they have invited the itinerant ex-Volkswagen driver Andreas Mikkelsen back again into their team.

The consistent Craig Breen stays while the third Citroen team car will again be entrusted to Stephane Lefebvre.

Absent from the line-up of three WRC Trophy drivers in pre-2017 World Rally Cars (Valeriy Gorban’s Mini and the Citroens of Jourdan Serderidis and Julien Raoux) is Martin Prokop in the second Onebet Jipocar team car. 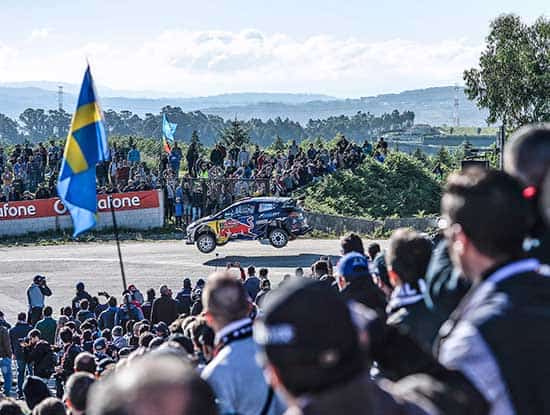 Sebastien Ogier continues to lead the WRC and will open the road on day one.Among the five entered 2017 WRC Fiestas is a prize drive for Teemu Suuninen, at the wheel of the car rallied earlier by Lorenzo Bertelli. The 2014 national Polish champion Vojciech Chuchala enters a WRC event for the first time competing in a Fiesta R5 as a WRC2 competitor, but Kajetan Kajetanowicz who is absent stays with the European championship which he is currently leading.

The Junior WRC cars are prepared by M-Sport at their Polish headquarters at Krakow in the south of the country. One of these will be driven by the recently announced Neste Rally Finland Future Rally Star as Emil Lindholm.

A strange situation has emerged in the weeks before the event. Although rules permit organised pre-event team testing in Poland, not every team availed themselves of this opportunity.

M-Sport went testing in Estonia, notwithstanding their Polish base, while Hyundai went testing in Lithuania. It is reported that the number of available test locations which are outwardly in similar condition to the rally roads, but are strong enough to maintain their condition despite excessive frequent use by WRC cars in the region is limited.

With four instead of three weeks before the next WRC event, teams will be taking the chance to send their trucks, many of which had travelled from Portugal to Sardinia and then to Poland back to base for restocking and overhaul.

M-Sport go to Poland with a 40 point lead in the Manufacturers’ championship over Hyundai and 91 points ahead of Toyota Gazoo, with Citroen still far behind.

Neuville is now a little closer to the leading driver, Ogier, whose lead is down to 18 points. Pontus Tidemand goes to Poland with a 46 point lead in WRC2 over Suuninen and has the chance to come within four points of the title.

Nil Solans leads Raphael Astier in the WRC3 series and is 20 points ahead of Nicolas Ciamin in the parallel Junior WRC. 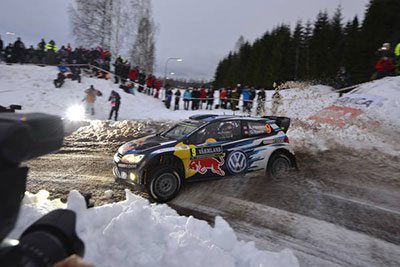 Andreas Mikkelsen replaces Kris Meeke at Citroen for the Polish event.As part of the team’s efforts to understand the recent poor performance of their lead driver Kris Meeke, Meeke is being replaced on this event by Andreas Mikkelsen, for whom this event was one of two rallies which he won last year for VW.

Craig Breen and Stephane Lefebvre use the cars they previously drove in Corsica (6 and 8), Mikkelsen uses chassis 4 last used by Meeke in Portugal.

Main characteristic of the event is needing a car which is stable at high speed and is stable in ruts. On this event a driver needs to trust his pace notes implicitly.

Pre-event testing was carried out in Poland as the event is uniquely specific and the team needs to test in locations close to real conditions. Work concentrated on suspension and central differential set-up.

Same cars for Thierry Neuville and Dani Sordo as in Sardinia (chassis 6 and 1), Hayden Paddon has chassis 3, his Argentina car.

Technical troubles in Sardinia (Sordo turbo and gearshift, Paddon damper and driveshaft failure, Neuville brake trouble) were all unexpected and collectively enabled their rival M-Sport team to pull ahead in the championship.

This year there are many small changes to the routes of the stages. The team tested in Lithuania.

The weekend before Poland, Neuville drove, but crashed, a Hyundai R5 at Ypres, embellished with a spectacular design that was the winner in a competition for Belgian children. 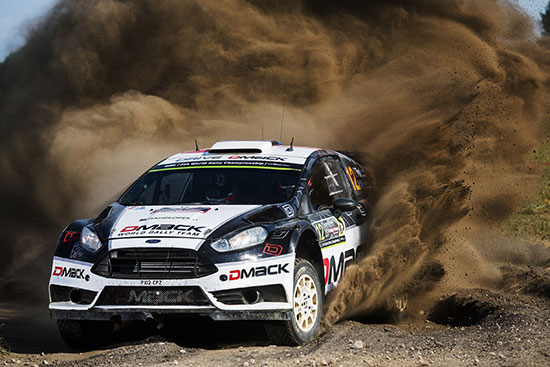 Ott Tanak will be aiming for his second WRC win on the trot.The three team cars are all the same as used in Sardinia by Ogier (7), Tanak (3) and Evans (4). Pre-event testing was carried out in Estonia on roads similar to those in Poland, one day for each team driver.

The team is also running a fourth 2017 car for Teemu Suninen who had a two day familiarisation test in Greystoke forest in North England.

Fast, sandy but fragile surfaces characterise the stages. Main rally news from M-Sport is that their Polish base at Krakow is moving at this time from the other side of town to close to the nearby international airport.

While the team had a relatively trouble-free rally in Sardinia, the OneBet Jipocar team car of Mads Ostberg had a worrying suspension failure on the final stage, similar to a failure which had happened in Argentina. 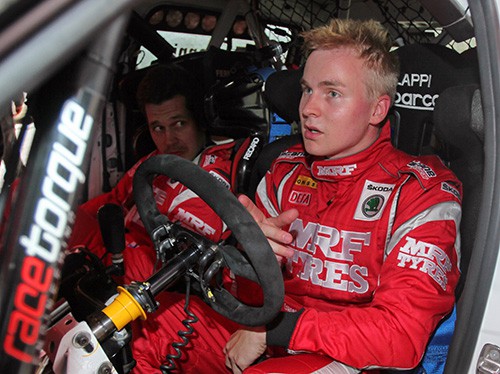 Esapekka Lappi starred in Italy and will look to continue his improvement.Rajd Polski is memorable for Toyota’s drivers. Five years ago Esapekka Lappi scored his first major international win, on his first outing with the Skoda Motorsport team, on his event, which in those days counted for the European Rally Championship.

Jari-Matti Latvala lost a guaranteed second place in the WRC 2009 event through an error on the final stage, within sight of the finish ramp, in his Ford.

Lappi’s gearbox and Latvala’s starter failure were due to impacts, Hanninen’s power steering failure in Sardinia was “very unexpected and should not have occurred”.

Latvala and Hanninen have their Argentina cars (1 and 2), Lappi’s is the same as Sardinia (5). Ride heights, suspension stiffness and cooling arrangements have been adjusted for the really high speed and soft stages will create deep ruts.