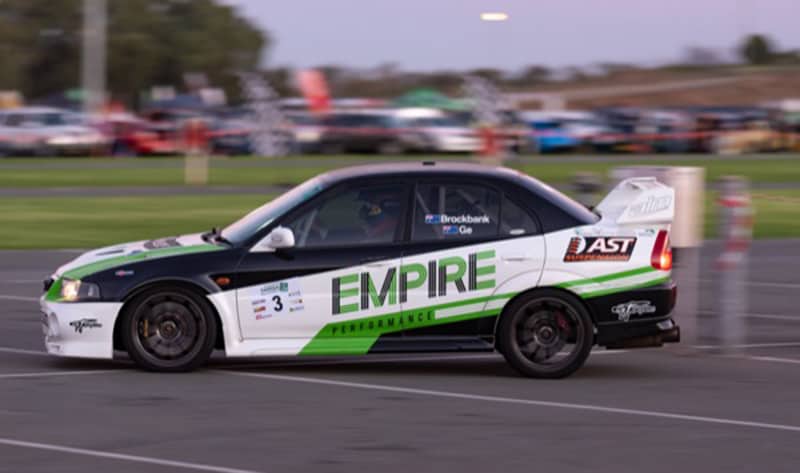 Spectators lined the Perth Motorplex course last Thursday to watch the fifth and final round of the Shannons Targa Rallysprint Series, which was the closest finish since the series commenced nine years ago.

Winner of Round Five was Troy Wilson in his Mitsubishi Lancer Evo X, impressively taking two wins from two starts this season. Wilson didn’t compete in rounds one, two or three, thus was out of contention to compete in the outright Targa Rallysprint Series.

The top step of the outright podium for the series was decided by just two-hundredths (0.02) of a second in a nail-biting finish as Daniel Chong, who placed second in the final round, ripped the Shannons Targa Rallysprint Series win from Mark Greenham who placed third, effectively handing Paul Brockbank the series win by one point. Had Greenham finished three-hundredths of a second faster in his Mitsubishi Evo 9, the title would’ve been his.

“I was a bit surprised to be in the hunt to be honest. It was always going to be an uphill battle running against the outright class cars in our Targa-spec Evo, but we gave it a crack and the times between second and sixth were incredibly close. Disappointing to miss out on the outright win by so little, but we really enjoyed the close battle and having to push all night,” said Greenham, 40, of High Wycombe.

Brockbank, 31, while placing sixth in Round Five, was the series winner in his Mitsubishi Evo 6 with a new co-driver, Alex Rullo, for the final round.

“My usual co-driver, Matt James-Wallace, had his car fixed and ready to go, so he drove and ironically beat me last night, the traitor!” said Kardinya resident Brockbank.

“Thankfully I recruited a lightweight 18-year-old Instagram model willing to come for a ride,” he said, referring to V8 Supercars driver Alex Rullo.

“I drove pretty conservatively all night and just tried to play it safe, but everyone stepped their game up so much that by the last run I had to properly send it otherwise I would have lost the championship. I made a pretty big error and nearly nailed a tyre bundle, which almost cost me the win, but thankfully the results worked in my favour.”

Chong in a Mitsubishi Evo 10 rounded out the series top three.