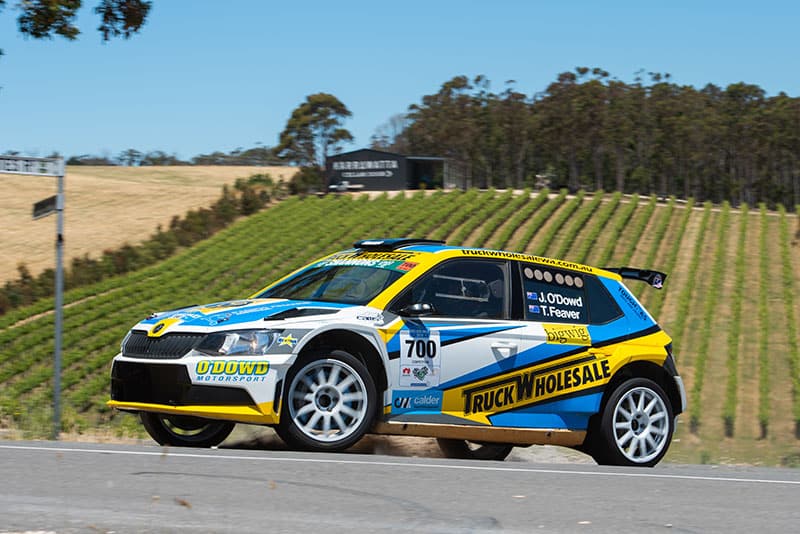 John O’Dowd and Toni Feaver have completed 2019 in fine fashion with fifth place at the Adelaide Rally, an impressive debut result on the South Australia tarmac.

Taking in roads that wound through the South Australian wine growing regions, O’Dowd and Feaver quickly got up to speed, completing the opening day within the top-10 and then moving progressively forward over the remaining three days.

“I’ve got to say, we were really pleased with fifth outright. The only changes to the car were tarmac tyres and springs,” O’Dowd said.

“The ride height was pretty high and the car was a bit loose on some of the downhill sections. It was a challenge. The rear-end was jumping around a bit. So fifth with a car in essentially gravel spec was a fantastic result.”, a pleased O’Dowd said.

“Race Torque have been amazing all year with the way the car has been set up. It ran faultlessly over the four days. The only issue was when I punctured on a short stage; apart from that we didn’t have to touch the car.”

The Adelaide event completes a confidence-building year for O’Dowd and Feaver.

“This year was all about gaining experience in the R5 car. The Skoda is very different to the more production-based Subarus that have driven in recent years.

“Each event we did this year, in the WA championship, the Australian Rally Championship and tarmac events, was a learning experience. So we’ll take a lot of confidence into 2020.

“Next year, we’ll be focusing more on the Australian Rally Championship. I’ve got a co-driver, a team and a car that can deliver good results. All of the pieces are in place, and I’m really looking forward to next season.”