In a dramatic and action-packed Great Tarmac Rally (GTR), the final round of the 2018 AASA Australian Tarmac Rally Series, the championship came down to the final stage, the Lake Mountain to Marysville descent.

With Championship leader, Danny Traverso and Jason Page, out of contention after a spacer failure caused them to lose a front wheel, and with third placed Greg and Rhonda Burrowes succumbing to turbo issues, the 2018 championship would come down to a battle between Snowy River winner Michael Harding and Adam Kudra in their 2008, Subaru STi and Tim Hendy and Julie Winton-Monet in a 2016 Porsche GT4.

Despite tyre issues, which were being experienced up and down the field, and the GT4 Porsche relentlessly hunting him down, Michael Harding started Sunday morning favourite to win the 2018 title. That was, until clutch failure on the first stage. From then on, the Subaru had to be started in gear, using the starter motor. Tim Hendy and Julie Winton-Monet, who were already pushing their Porsche to its limits and guaranteed second in the Championship if they finished, lifted to apply maximum pressure to the Subaru driver, heading into the final stage of the day, the Lake Mountain to Marysville descent.  If he wanted to win the championship, Michael Harding would have to risk his wearing tyres and failing gear box, or alternatively he could coast home for second.

Going for broke and with the finishing line tantalisingly close, a puncture ripped the wiring loom out of the car, terminally damaging the Subaru’s electronics.  Michael Harding was out and the 2018, AASA Australian Tarmac Rally Championship title would go to Tim Hendy and Julie Winton-Monet in their 2016 Porsche GT4. 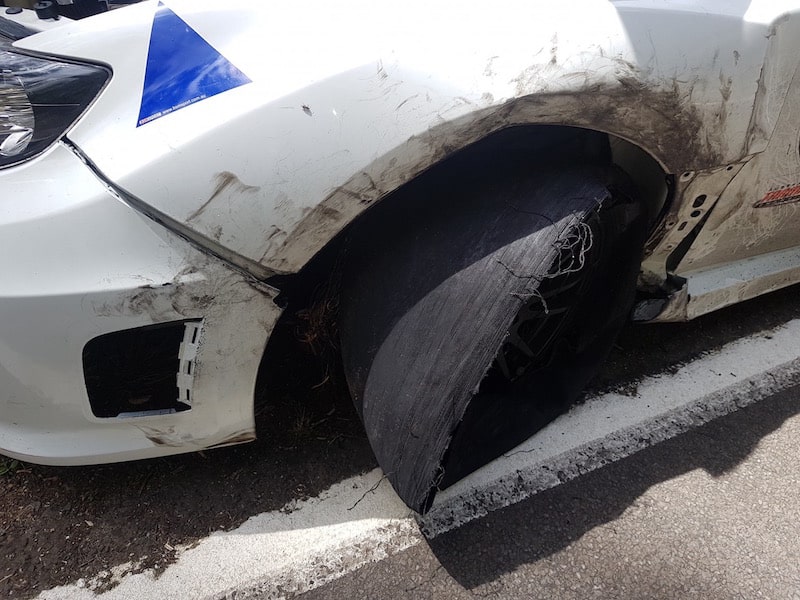 Tyre issues were a problem on the Great Tarmac Rally, as seen here on Mick Harding's Subaru.

‘Although the series has the best drivers and co-drivers in Australia competing, I feel a little like a Steven Bradbury, with both Danny Traverso and Michael Harding succumbing to issues, yet it’s still an amazing privilege to be the Australian Tarmac Rally Champion,’ said Tim Hendy. ‘The competition in this series has been intense, and the Reefton to Lake Mountain stage yesterday, has to be the most demanding Tarmac Stage in Australia.’

The final round of the Championship is always a rally within a rally, with some entrants competing for an event win, while others are focused on the championship.

The opening stages of the GTR, like Snowy River, laid bare any weakness or gremlins in the competition vehicles.  Outright contender Craig Haysman and Julie Boorman in a C7 Corvette, on only its second outing, experienced heat related electronic issues, temporarily losing power steering. Despite this, they finished second in the Modern 2WD category.

Barry Smith and Dale Moscatt in an Audi TT RS overcame heat related wheel sensor issues, to win the showroom 4WD category at GTR. They also finished second outright in the 2018 Tarmac Championship. And, to top off a successful year of rallying, they won the 2018 Championship in the Showroom 4WD category, with another Audi TT, that of Michael Minshall and Paul van der Mey coming second.

Craig Dean and Mary Hughes in a red 2015 Shelby GT Mustang, having broken a tail shaft at Snowy River, could also have been out of the GTR, when a brand-new set of front tyres were, within two stages, worn through to the steel belts – not that they knew at the time. But luckily, the tyres didn’t puncture, and with fresh rubber in place they finished second outright and won the Showroom 2WD category. 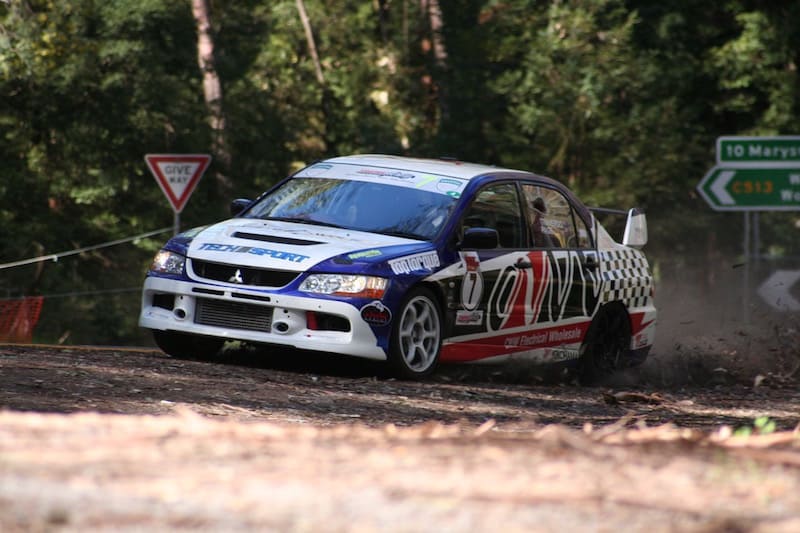 Danny Traverso was leading the championship heading into the Great Tarmac Rally.

Not all competitors were as fortunate as Craig and Mary. The 1997 Nissan GTR of Steve Marek and Cindy Pearce was consuming 16 Litres of oil to 5 litres of petrol; remarkably however, they battled through to Special Stage 12 before withdrawing. The 2003 Subaru of Dan Ford, colloquially known as the old bull, and Dennis Neagle, twice broke hose clamps on the intercooler, causing turbo issues. They would however, go on to win the Early Modern 4WD class.

The GTR is arguably the toughest round of the tarmac rally series with its long and demanding stages. Its reputation is well deserved with even some of the seasoned navigators experiencing motion sickness. Tyre wear and degradation was a significant challenge for most competitors. Interestingly, those on high performance road tyres, like Kennard and Wheeler, did not have the same problems as those using R Specs. The question on everybody’s lips was ‘Is the exacting nature of the roads and series beyond the R Specs or is the problem confined to particular manufacturers?’

Angus Kennard and Ian Wheeler, driving a Nissan GTR, took a well-deserved win at Great Tarmac Rally, having battled Michael Harding all weekend. ‘The car ran faultlessly’, said Angus Kennard, 'and with the exception of three kangaroos on the first stage on Sunday giving us a bit of a scare, we got through without too much drama. Second went to the Shelby GT Mustang with Ben Calder and Steve Glenney in a Mitsubishi Evo coming home third.

In the Classic category, father and son team, Keith and Alex Morling in their 1976 Ford Escort, followed up their Snowy River win with another victory at GTR, despite kissing the Armco barrier, on the Reefton descent. The win made them the 2018, AASA Australian (Classic) Tarmac Rally Champions. 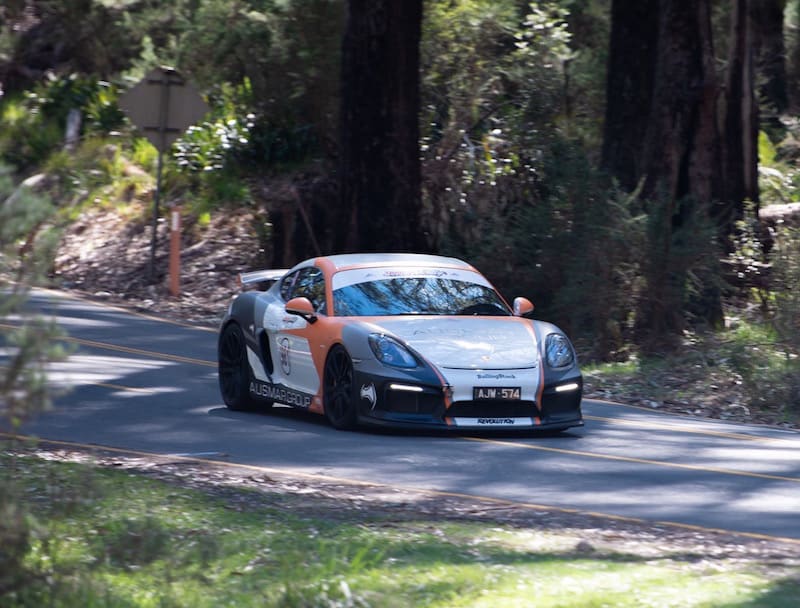 In Super Sports, James Callahan and Hugh Feggans driving a Mitsubishi Evo took the victory, beating Mark and Lacy Biggs, the embedded reporters for the series coming in at second place. But second was enough for Mark and Lacy to take out the 2018 Super Sport Championship.

Despite their disappointment of not winning the outright championship, Danny Traverso and Jason Page are still the Modern 4WD champions for 2018.  Adam Spence and Lee-Challoner-Miles in a 2013 Renault Clio, who finished second to the GT Mustang of Craig Dean at GTR, won the 2018 Showroom 2WD category.

The AASA Australian Tarmac Rally Championship has partnered with Drive Against Depression to show support for mental health.   ‘People experiencing issues are not alone,’ said Peter Washington of Mountain Motorsports. ‘We want to raise awareness, so people know support is available.’

The Great Tarmac Rally charity car display, held on Saturday, was organised by Drive Against Depression to coincide with the competition. Over 50 entrants, displayed their beautiful machines, raising awareness and supporting those with depression and other mental health issues, on the football over at Marysville. The display cars were joined by the rally competitors as they finished their final run on Saturday afternoon.

At the Snowy River Sprint Mark Bateman, Events Chaplain, raised two B-Doubles worth of hay to be shipped to our drought-stricken farmers from competitors. He raised the bar at GTR and four B-Doubles will be heading north following this event. 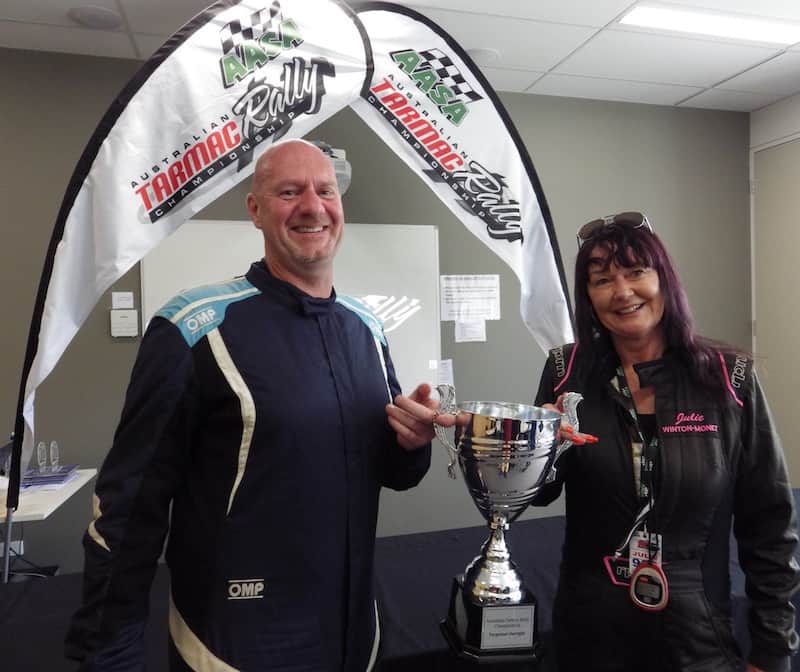 Because of the support of the Southern Alpine Resort Management, Vic Roads and the Shire of Murrindindi, the Great Tarmac Rally injected over $200,000 into the local economy over the three days of the event.

To accommodate a new high profile and iconic location event in NSW, the Australian Tarmac Rally Series had to realign its championship dates. The GTR was both the championship round for 2018, and the second round of the 2019 championship.  The new event, to be held in June 2019, will become the first round of the 2020 series.

The famous Rally Mt Baw Baw, with its 320 corner Porcupine creek stage, on the 23 and 24 February 2019, is the next event on the calendar.