After storming to back-to-back victories in 2017 and 2018 at the Coromandel’s Leadfoot Festival, the potent combination of Scottish rally star Alister McRae and the ex-Possum Bourne Vantage Subaru WRC rally car will be attempting to win the South Island’s iconic Ashley Forest Rallysprint.
The long-running north Canterbury event, held over September 22 and 23, is now in its 31st year and attracts not only New Zealand’s best drivers and their hill climbing specials but also internationals wanting to add their name to the prestigious winner’s trophy. Australian-based McRae has had this piece of silverware in his sights and courtesy of his established relationship with the team at Vantage, who own the Subaru WRX STI, he will be using all 750hp at the historically-special car’s disposal to clock the fastest time on Sunday’s final run.

“Ashley Forest Rallysprint has a lot of history and of course everyone wants to win it. Competing back down in New Zealand is great and being in the Vantage Subaru should make for a great weekend,” Mc Rae says.

Vantage Principal Craig Vincent was Bourne’s co-driver for five years between 1996 and 2001 and his company Vantage Motorsport purchased the car from Possum Bourne Motorsport after Bourne’s death and has “continued to race it in memory of our great mate,” Vincent says. "We are glad to have the opportunity to go to Ashley Forest and compete in what is a long-standing, iconic rallysprint and feel it is a nice progression after picking up the Race to the Sky title and winnning Leadfoot. This rallysprint is special to the Vantage team because it was one of Possum's favourite events," Vincent says. The Subaru's suspension has been upgraded to 2018 WRC technology and it will be changed out of its tarmac set-up into gravel-spec. The engine is the 750hp version that won Race to the Sky and is run at the Leadfoot Festival. Paul Hayton from Speedhub, who has looked after the car since Bourne's days with it, will prepare and run it at the Canterbury event. Promoted by Ratec Motorsport Incorporated, the Rallysprint covers a total distance of 1.7 kilometres, 55% uphill, and 45% downhill, on a shingle road in the Ashley Forest. As much as he has enjoyed winning the tarmac Leadfoot Festival, held on Rod Millen’s purpose-built driveway, McRae has fond memories of powering up the Cardrona Valley-based Snow Farm’s unpaved, access road on his way to victory at the final Race to the Sky event in 2015. “The Vantage Subaru is almost 20 years old now but with the extra horsepower and some testing beforehand on gravel, I think we can be competitive. Thinking back to Race to the Sky, the car was amazing fun to drive on gravel,” McRae says. Similar to both New Zealand events he has driven in, the Ashley Forest Rallysprint is also based on an elimination-style series of runs. A maximum of 60 entries is allowed and after the Saturday morning briefing, competitors will complete four qualifying runs - time permitting - that day. There will be one qualifying run for all competitors on Sunday, before eliminations begin. Knock-out runs will follow for the top 32, 16, 8, 4 and finally 2. The overall winner will be the competitor who has the fastest time in the top 2 run-off on Sunday. 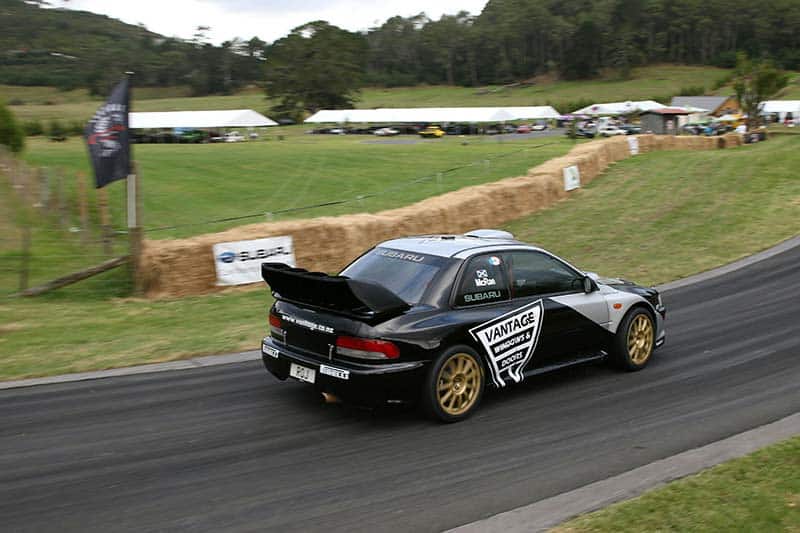 Kiwi WRC driver Hayden Paddon has already declared he will enter the Ashley Forest Rallysprint. The ultimate outcome for spectators would be to see his current Hyundai pitted against the Vantage Subaru in the top-2 final runs. Can McRae’s vast experience and the long-proven successful Vantage Subaru triumph against youth and modern technology? McRae thinks so.

“Beating Hayden certainly won't be easy but we will give it a good try. But I'm sure there will be more than just Hayden to fight against on the day,” he says.

Ratec Motorsport is excited to have McRae competing at the 2018 Ashley Forest Rallysprint in the ex-Possum Bourne Vantage Subaru. "With World Rally Championship competitor Hayden Paddon, Hyundai i20 AP4++, plus International Rallycross driver Sloan Cox, defending champion and course record holder in his Hillclimb Special Mitsubishi Evo 8 entered, it will be a great weekend of motorsport," club president James Hunter says. ​​​​​​​The first running of the popular Ashley Forest Rally Sprint was held in 1979, which saw Rod Millen’s brother Steve win in a factory-backed 2.3 Vauxhall Chevette. This meeting was staged over a downhill section before changing the year after to the 1.7 kilometre uphill and then downhill course that has challenged competitors and thrilled spectators in the intervening years. The first winner on the current circuit was the late John Woolf driving a Mazda RX3 with a winning time of 1min.10.81secs. From then on the magic minute has been the challenge for all prospective winners. This finally came in 1988 when Rod Millen driving a four-wheel-drive Mazda RX7 won in a time of 59.14secs. The late Kim Austin then became a regular in finishing in under a minute and his 1999 winning run of 56.57secs, in a 4WD Mitsubishi Starion V8, remained the course record for many years. Rotorua rally driver Sloan Cox finally beat it last year, clocking a 55.3secs time. Over the years winners have included national rally champions Neil Allport, Tony Teesdale and Paddon. Possum Bourne won the Ashley Forest Rallysprint three times in different model Subarus (1989 - Subaru RX, 1991 - Subaru Legacy and 2000 in a Subaru Impreza) which makes for a poignant entry of the Vantage Subaru that New Zealand’s late-great rally driver drove to his sole Race to the Sky victory in 2001. Television coverage is being arranged with screening dates to be advised. Gates open at 8am. Admission prices are as follows: Saturday $10, Sunday $15, weekend pass $20, family weekend pass $30 Eftpos will be available at the gate.
VIP Exclusive Content
Get full, exclusive access for only $6.55/month.
Subscribe Now
Already have an account? Sign in