ARC privateers give control tyre the thumbs up, but …

Leading Australian Rally Championship privateers Nathan Quinn and Brad Markovic have given the new-for-2017 MRF Tyres the 'thumbs up' after after three rounds of this year’s series.

Nathan Quinn is impressed with the wear rate of the ARC's control tyre. (Photo: Peter Whitten)Both drivers have told RallySport Mag that the wear rate on the MRF control tyres has been better than with last year’s Kumho tyres, however, both agree competitors are given too many pattern and compound choices.

Quinn, who led the championship before the previous round in Canberra, explained:

“I think the concept is great, but since the intro of the control tyre I've always believed it should be a control tyre in its compound and pattern, with limited sizes,” the Lancer Evo 9 driver said.

“Since 2010 we really have had just a control supplier. It's great that we can all set similar times to each other on different patterns, as seen at WA and ACT. But for those new to the tyre it makes for a tricky decision on what to use based on others’ opinions and whether or not that would be the best for that person. It just puts a bit of guess work into it, a bit more stress.”

“There’s still too many choices for a control tyre. I would be happy for it to be one pattern for all, with maybe two compounds, just to simplify it again.”

RallySport Mag asked further questions on the performance of the MRF Tyres, with generally a positive response from both Quinn and Markovic.

RSM: Three events into the 2017 ARC, how have you found the new MRF control tyres being used?

NQ: I've found the tyre really good. Main attribute that appeals to me has been the ability to get through on a dozen or less tyres per event. On Saturday at Nat Cap we had a rock penetrate right into the well of the rim, crushing the rim into the caliper. Surprisingly it held up, and eventually went flat by the time we got back to service as it had cracked the rim. In contrast though, we did have an unexplained flat on Sunday!

Another great attribute is that the top 10 all seem to use a different pattern, but we all manage similar stage times!

BM: Quite a big learning curve so far. Unfortunately we haven't been able to have a test day prior to an event yet, so all the testing and changes have been during the event. We are looking to the mid-season break to hopefully back-to-back test the different patterns to get our head around them a bit more. 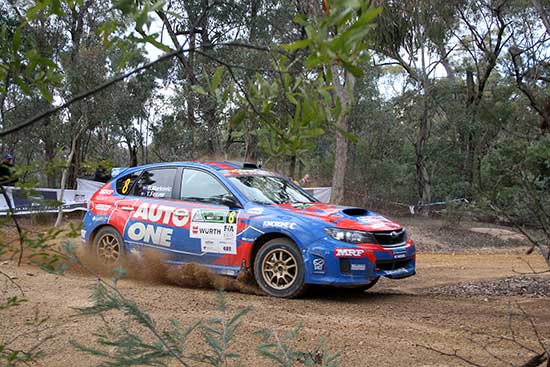 Brad Markovic puts the MRF Tyres through their paces at the Nat Cap Rally. (Photo: Peter Whitten)RSM: How do the tyres compare to last year’s control tyre in the following areas:

NQ: Superb. I loved the Kumho R800 and I managed to score some drives overseas because of my relationship with the brand. It was always a pleasure with the Australian Kumho dealer. Meanwhile, MRF are coping well, and while I'm yet to be 100% in love with one particular pattern, I do think wear is a major improvement.

It's great for the buyer, but maybe not so good for the retailer! After using different patterns I did find one pattern a little down in braking traction, but better sideways traction.

BM: The wear so far has been better then the previous control tyre, but we are still working on finding the optimum temperature and pressure range to get the most out of them.

NQ: All three patterns I've tried have been good.

BM: Lateral grip has been pretty good. We’ve been working on getting the car to turn in better on the tyre under braking.

NQ: I find that this is probably the weak point. If you get the pattern/surface condition combo wrong, I do find that braking can be compromised.

BM: The Subaru is a heavy car so it struggles a bit under brakes. This is the area where last year’s tyre felt a little more consistent and stable.

RSM: How many tyres have you been using per event?

NQ: I've been getting through on 12 or less, including media day. We had some fantastic support for ACT which covered our tyre budget. So expect to see me with 16 flash new ones for SA!

BM: We have been using between 12 to 16. The biggest advantage is that the championship has a great partnership with a passionate brand and personality. Vivek wants to see his business and brand grow in Australia, so that should have great potential for the championship going forward.

The next round of the Australian Rally Championship is Lightforce Rally SA in September.