They’re equally famous in the World of rallying – Ari Vatanen and the fearsome Group B Audi Quattro – and yet the pair has never united in competition.

During the days of the fire-breathing Group B rally machinery Vatanen piloted the spectacular Peugeot 205 T16 to five victories, and was pitted against the factory Audi drivers and their Quattros.

Yet during his long and illustrious 30-year rally career, including stints with Ford, Peugeot, Subaru, Mitsubishi and Citroen, Vatanen has never driven a Group B Audi Quattro. 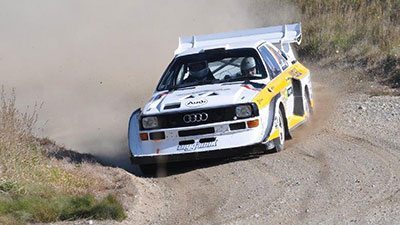 At the upcoming National Capital Rally Vatanen, who will be the special guest speaker at the Rally Hall of Fame Gala Dinner, will be on hand at the pre-event shakedown to finally get to grips with this most spectacular of rally cars.

The rally legend will guest drive the Group B monster in a demonstration run in the Armor All Power Stage at the opening round of the East Coast Bullbars Australian Rally Championship. A record crowd is expected to witness this one in a life time experience - Ari Vatanen behind the wheel of a Quattro..

As a special thank you for his years of service to Australian rallying Vatanen will be co-driven in the Quattro by CAMS Series Scrutineer Barry Hapgood.

“The best thing that's happened to me in the past was driving a lap around Gloucester Park with Neal Bates, but I reckon Neal's about to become second best,” said Hapgood.

“Years ago we sat around after car club meetings watching videos with Ari Vatanen in them. I went to a few events in New Zealand in the 1980's when Ari was running and I’ve always been in awe of what he can do with a motor car.”

“To think that I'm going to be sitting in a car with Ari Vatanen is just incredible!” exclaimed Hapgood.

Enthusiasts and rally friends are invited to join Ari Vatanen in welcoming the 2014 Rally Hall of Fame inductees at the gala dinner to held at the Rydges Lakeside Hotel in Canberra on the 27th of February.

Limited tickets remain for the Australian Rally Hall of Fame gala dinner and are available from: