At 70, ‘Monster’ Tajima has plenty left in the tank

During the 1990s and 2000s, Japan’s ‘gentle giant’, Nobuhiro Tajima, was a regular and popular visitor to rallies in Australia. Nicknamed “Monster” because of his tall stature, the quietly spoken Tajima was a demon behind the wheel. His high-revving Suzuki Swifts were crowd pleasers in Rally Australias and Rally of Canberras, but his success spread much further than that. A seven-time winner of the Pikes Peak Hillclimb, Tajima recently turned 70, but as he told RallySport Magazine’s Peter Whitten, he has plenty of fuel left in the tank, and has a new car he’s ready to let loose. * * * * * Tajima’s first foray into Australian rallying dates right back to 1979 when he contested the five-day Southern Cross International Rally from Sydney to Port Macquarie. He drove a Toyota Levin to sixth place in an event won by George Fury’s Datsun Stanza.

“Running in Australia in the 1970s was my dream,” Tajima says.

“It was my dream to be able to drive in the great outdoors. Japan is a small country. It was great to run a great gravel rally, and I still want to.” He didn’t return to Australia until 1991, when his Suzuki Swift GTi set the crowds alight. The car is still one of the best sounding rally cars ever to grace a rally stage. “(The) Suzuki had motorcycle engine technology. I used it to compete with large displacement cars by maintaining high revolutions with small displacement,” he explained. And he did just that! The car wasn’t always the most reliable due to its high revving engine, but when it did last the distance, Tajima was generally ahead of many faster, four-wheel drive cars. 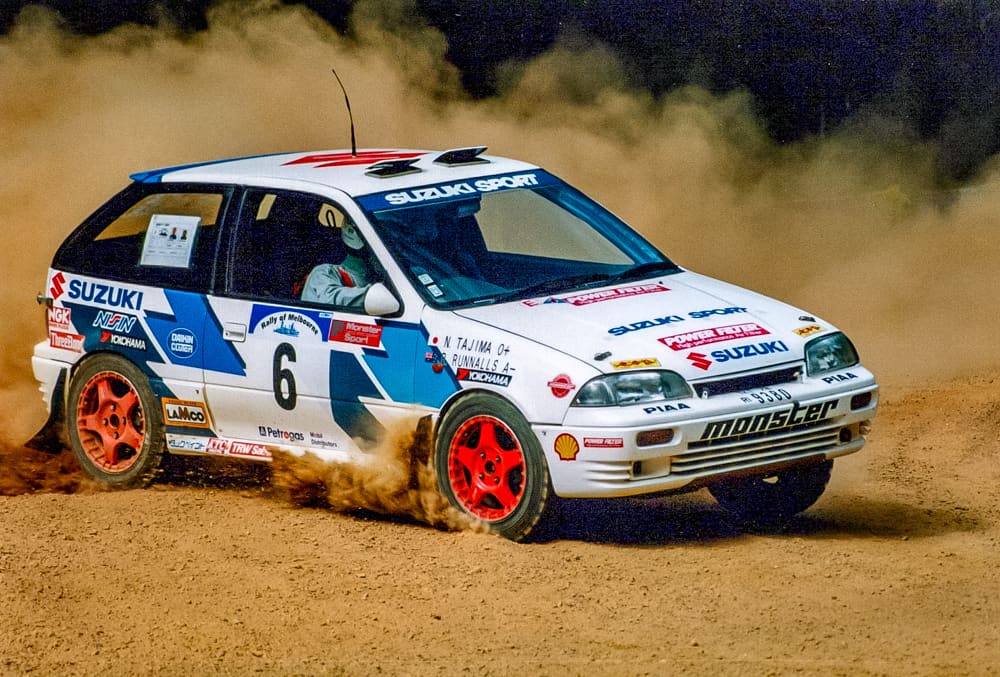 Tajima's screaming Suzuki Swifts did many events in Australia. He's seen here at the Rally of Melbourne.

Along with a love of Australian rallies, he also had a string of Aussie co-drivers sitting alongside him. Mark Nelson, Ross Runnalls, Mark Stacey, Glenn Macneall and Claire Parker all enjoyed the thrill of calling the pacenotes for ‘Monster’. It was their experience, he says, that saw him choose them over Japanese co-drivers.

“I also needed an English speaking navigator.” Interestingly, he didn’t compete in an international rally with a Japanese co-driver after the WRC’s1988 Olympus Rally in the USA, where he finished seventh. 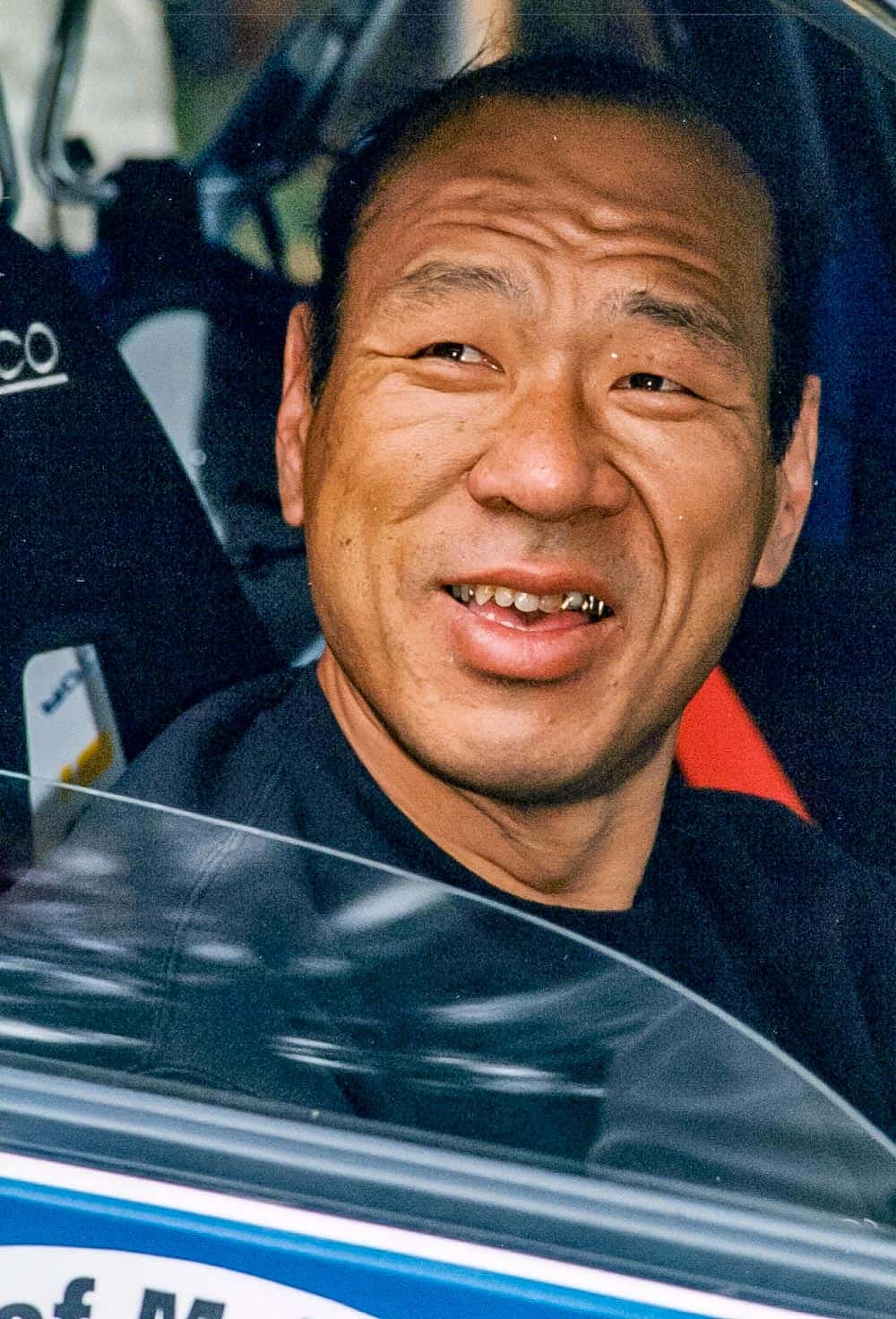 Tajima has been loyal to the Suzuki brand throughout, but mid-way through 1996, the manufacturer made what appeared, from the outside at least, to be a strange decision when they put Tajima into a Baleno station wagon for an Asia Pacific Rally Championship assault. It was similar to what Volvo had done in touring car racing, and while it gained Suzuki considerable publicity, there was a valid reason behind the choice.

“The high-powered engine of the 1800cc twin cam was only available in the station wagon in Japan,” Tajima explains.

Like the Swift before it, the Baleno proved successful, taking class wins in the APRC, and podium class placings in the WRC. Not bad for the family wagon! Tajima wasn’t a driver who put all his eggs in the one basket though. He regularly travelled to events that were either out of his comfort zone, far from home, or both. The famous Pikes Peak Hillclimb in the USA is a perfect example. In 1995 he took a twin-engined Suzuki Escudo to victory on a shortened course, but there was much greater success to come in the land of Stars and Stripes. 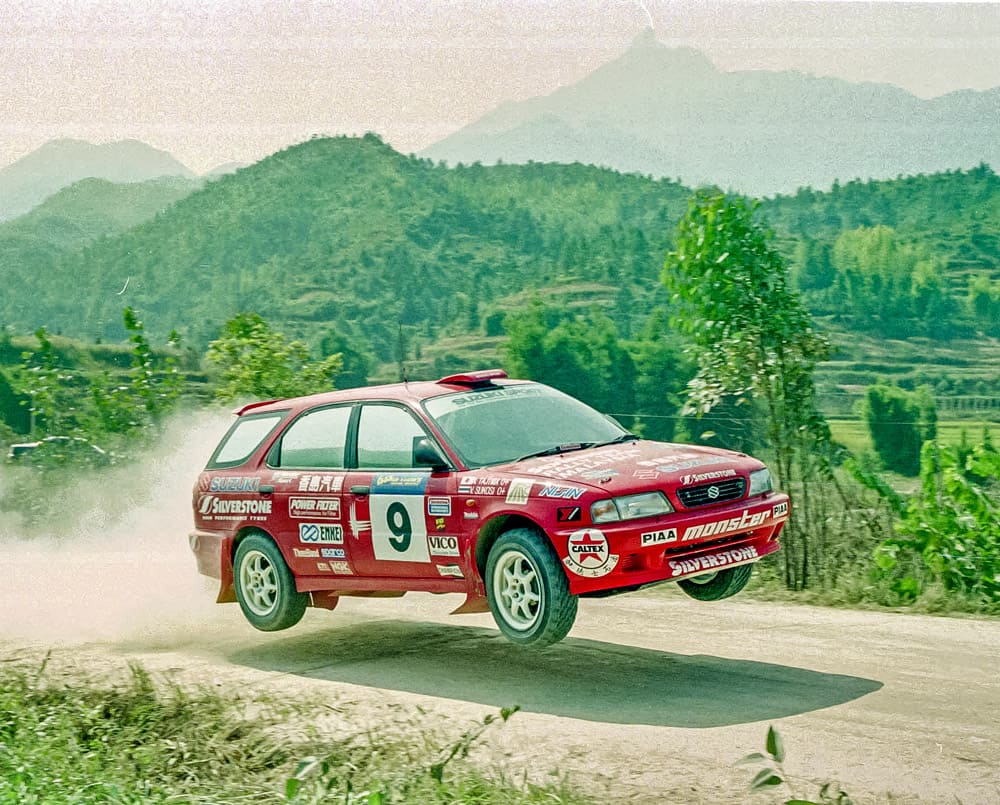 Out to get the shopping? Tajima jumps the Suzuki Baleno station wagon in the APRC.

The Japanese superstar then won the event outright for six years in a row – from 2006 until 2011 – becoming the first driver to break the magical ’10-minute barrier’ in 2011. Driving a Suzuki SX4, Tajima’s time of 9m51.278s was 10 seconds faster than his winning time in 2007, and a full 13 seconds faster than any other driver had achieved up to that time. So, is it the best rally road he’s ever driven? “I think so. It was a great gravel road, and I want to run again,” he says.

“At the toughest hill climb in the world, I wanted to challenge myself and the development of a competition car.

“I am very satisfied with the experience and technology I have gained from this development, as it has contributed to the development of the competition cars that followed.” 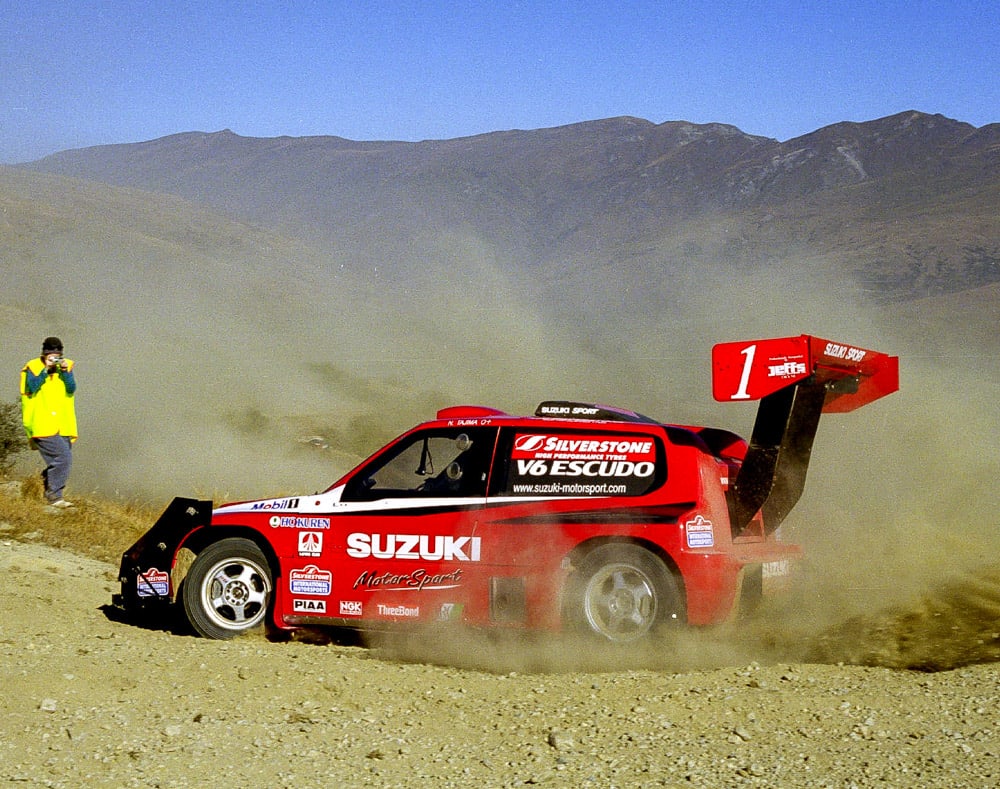 Tajima is an eight-time winner of the Race To The Sky Hillclimb in New Zealand's South Island.

Incredibly, he also won New Zealand’s Race To The Sky hillclimb for eight out of the 11 years it was held. Only Possum Bourne, Rod Millen and Alister McRae took the title from him, but none could get within a quarter of a minute of his time up the South Island mountain.

For all Tajima’s success though, perhaps the greatest shame is that he never had the chance to drive Suzuki’s World Rally Car in the 2008 WRC season.

It’s not something he looks back on with any disappointment though, and to be fair, at 58, his own career was probably more on the downward slope by then anyway. “I wanted to grow young drivers around the world,” he explained. “At first I participated in JWRC as general manager. We became a JWRC champion, so I made a step up to WRC. “At that time, the drivers I supported were active in WRC, so I am very satisfied.” 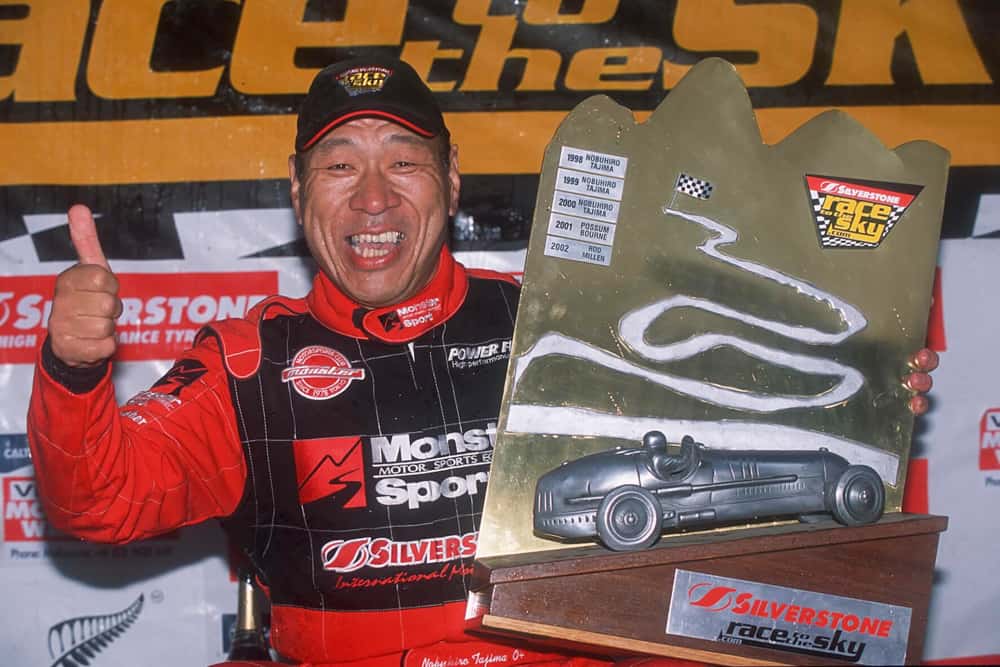 Tajima celebrating his 2003 Race To The Sky win – his fourth of eight wins at the event.

Pretty much retired from international competition since 2002, and having turned 70 in June, Tajima has no plans to slow down or retire. In fact, he’s just developed a brand new car. “This is my favorite gravel specification,” he says of the new 750kW, 300km/h, four-wheel drive Hillclimb Special he’s built. Not to compete with the twin-engined Suzukis of years past, this one’s electric powered. “I'm having trouble because I can't decide which competition to participate in the new Coronavirus measures. I'm ready though, so I want to participate in the competition as soon as possible. It’s a problem finding the right road too. Now sealed, Pikes Peak is no longer the gravel spectacular it once was, and the Race To The Sky hasn’t been held since 2015, and only once since 2007. “Please let me know if there is a smooth gravel road hill climb competition that you know of,” he says. If nothing else, there’s a challenge for budding event directors, with a headline entry all but guaranteed! 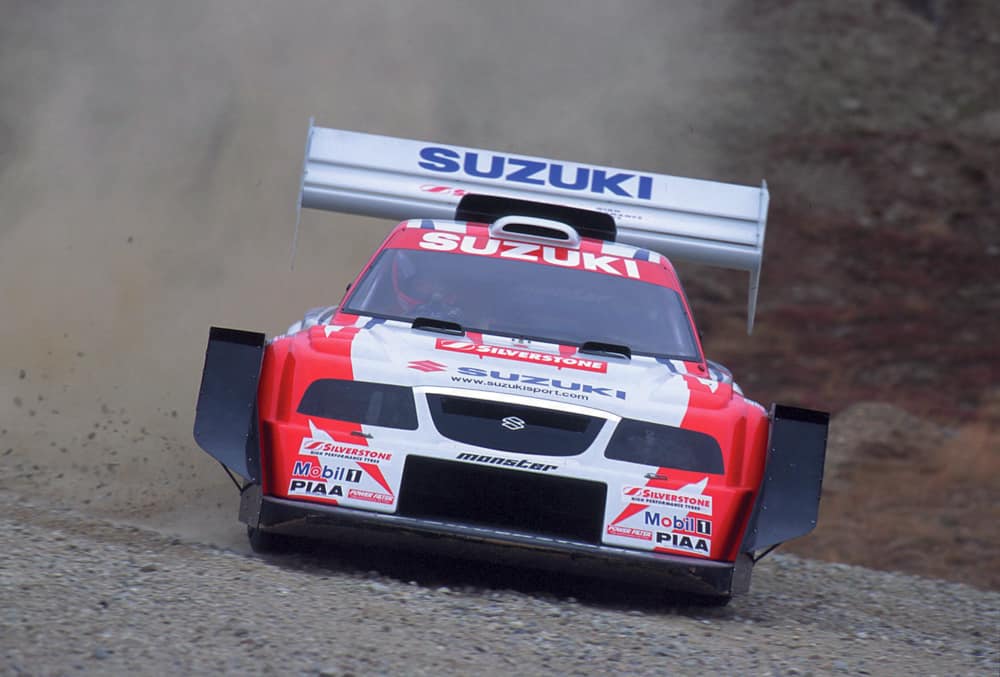 Twin-engined Suzukis were Tajima's weapon of choice on his way to seven Pikes Peak victories.

He may be 70 years old, but there is still plenty ahead for ‘Monster’. “Motorsport is my life. I especially like the gravel roads. “Driving in Australia and New Zealand is my dream. I have developed the ideal racing car and will continue to drive it until I die,” he says. There can be no greater confirmation of Tajima’s love for the sport than that. We wish him many more competitive entries, and look forward to seeing the new ‘Monster Sport Hill Climb Special’ in action. 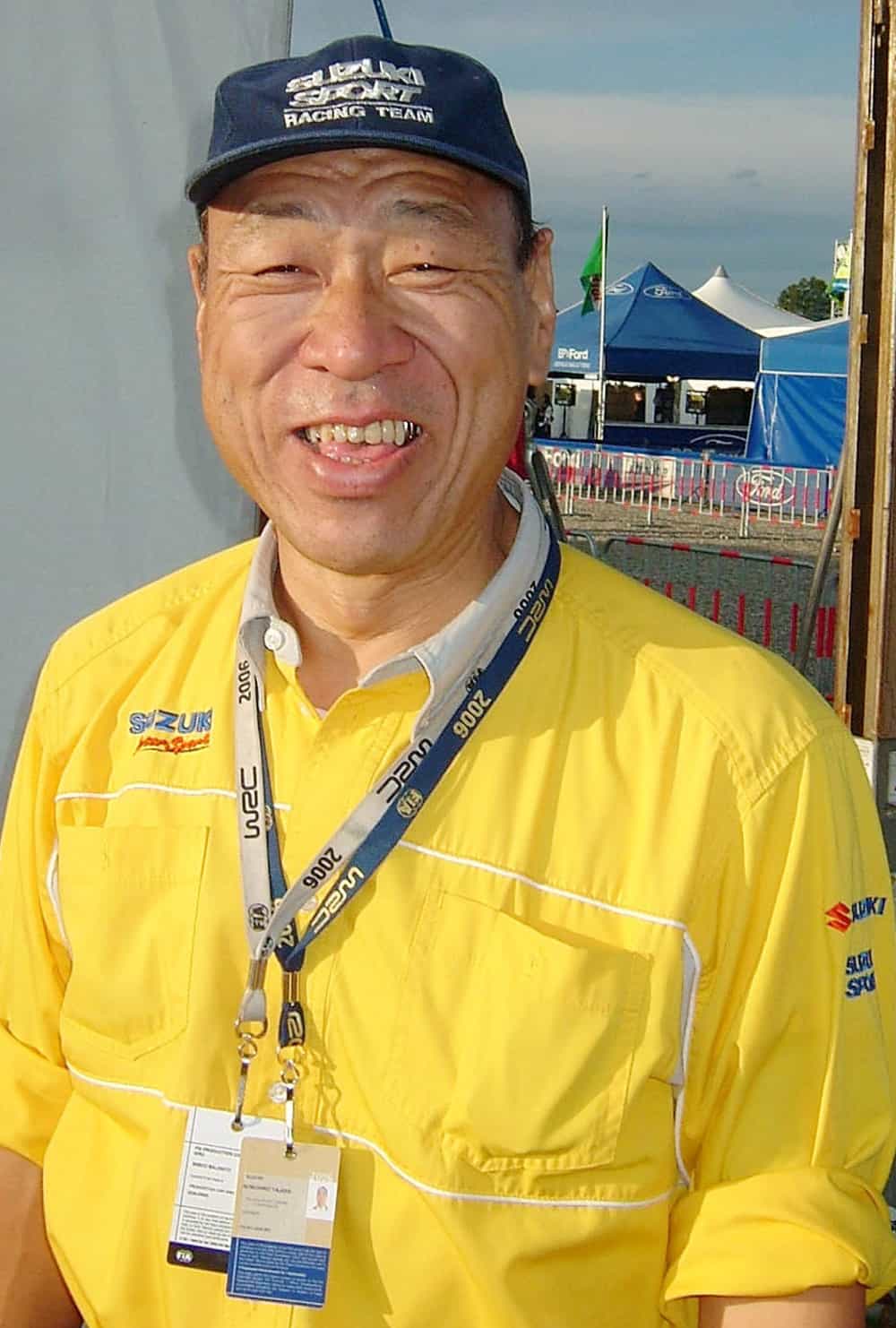 Tajima was team manager at Suzuki for their assault on the World Rally Championship in the 2000s. 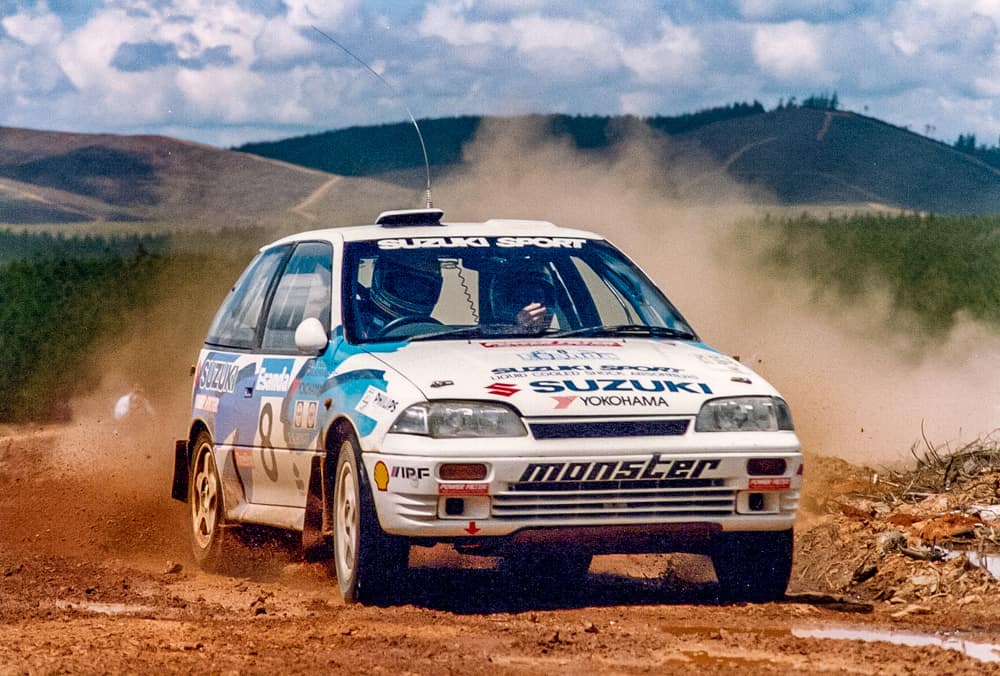 Tajima being guided by Ross Runnalls in a Rally of Canberra in the 1990s.