International Rally of Queensland marks the season’s first of two ‘endurance’ Rounds, where the East Coast Bullbars Australian Rally Championship regulars take on the best drivers from around the World, on this occasion the Asia-Pacific.

With the event featuring both an APRC and an ARC entry list, drivers can elect to enter either event, but still participate over exactly the same stages and competitive distance.

For the ARC regulars Championship points are awarded on the same basis regardless of if the driver is entered under the APRC or ARC entry lists.

ARC drivers entering the APRC often point out that an earlier starting time has benefits with road position, but Tony Sullens says he doesn’t think this will be a factor in Queensland.

“The nature of the roads in Queensland is that they sweep pretty well and get grippier, so there is an argument that maybe those guys starting further down the running order will have more grip and therefore will be faster,” he explained.

And with rain predicted to play a part over the course of the weekend Sullens said wet weather definitely evens out the playing field. “If it rains, and it looks like it will, it doesn’t matter if you’re car one or car twenty, it’s still going to be slippery!”

Sullens, who comes off scoring his maiden Heat victory at the last Round in Canberra, admitted that he’s learnt to enjoy the stages in Queensland despite their demanding nature and car-breaking reputation.

“I used to find the roads scary and narrow, I used to feel like I was a bit of a passenger because I just didn’t know the roads well enough. Now though I’ve learnt a lot of those roads we regularly use, and that gives you a lot more confidence as a driver to attack, especially over the blind crests to have that peace of mind that you know which way the road turns on the other side,” he said.

After suggesting last season that his lack of confidence in both his knowledge of the events and his front-wheel drive Citroen DS3 R3, Sullens believes that he’s now harnessed that limit between success and failure and will take that into the Round in Queensland.

“The cars always been good, I just needed to get my head around it. I used to take the attitude that there was no point killing myself in order to get a couple more points. Queensland though really suits me and I’ve always been fast there. It’s the sort of rally where if you drive well it gives you the rewards,” Tony explained.

“Last year a lot of the events I was driving for the first time, and I always had fresh pace notes. I just never felt fully comfortable. But in Queensland 70% to 80% of the roads are the same as last year, so it’ll be much easier to drive fast and committed this year.”

Last season Sullens and co-driver Julia Barkley ended up in third on the podium alongside Scott Pedder and Brendan Reeves, this year he’s aiming to go even higher!

Sullens will get his weekend underway with the ARMOR ALL & STP Power Stage, which has been relocated from the rain effected Beerwah forest to a stage outside of Imbil, before travelling back to Caloundra for the start ceremony in Bulcock Street. 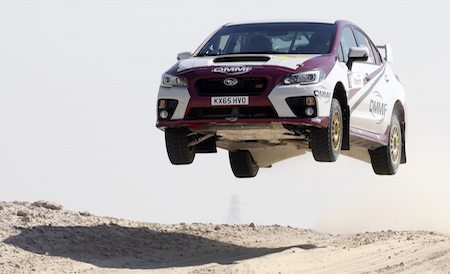