Bates and Taylor: the next generation to debut

One of Australia's most recognisable rally pairings, Bates and Taylor, will feature at this weekend's Rally of the Bay, but it won't be  the familiar Neal Bates and Coral Taylor taking to the stages, instead  Neal's son Harry and Coral's daughter Molly  will be hitting the gravel paired together in a Toyota Corolla.

The Rally of the Bay is a first for the both of the second-generation competitors - Harry's first time driving and Molly's debut as a co-driving.

According to Harry Bates it's both exciting and odd to see Bates and Taylor on the rear window with different initials. 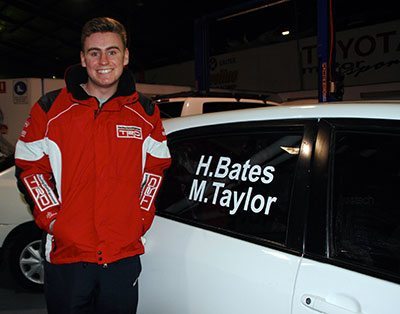 "The Bates and Taylor names have been around in rallying for longer than I have been alive so it's a bit odd to see a different letter before the last names," said 19 year old Bates.

Molly Taylor says it was only a matter of time before the two ended up in a rally car together - although admits she wouldn't give up driving for anyone.

"Harry and I have had a lot to do with each other over the years because of Mum and Neal and we were just chatting and joked about doing the Rally of the Bay together, the dates lined up so we figured why not?" Molly said.

"I'm really looking forward to the experience but I don't plan on switching to the I other side of the car permanently!

"I've always stirred Mum and joke that co-drivers have the easy job but it's an incredibly important role. I know what I expect from a co-driver and I have a great teacher at home to help me prepare."

Harry made his rally debut 12 months ago co-driving with Neal Bates at the International Rally of Queensland in which the father son pair won their class convincingly.  He says that experience unleashed the Bates Rally gene in him.

"Dad needed a co-driver for Rally Queensland was then I decided I really wanted to be a driver. I was sort of interested prior to it but after that I was set on driving," said Harry.

Bates Junior will follow in the footsteps of his father in car choice as well and will take to the stages in a 2003 Toyota Corolla. Harry admits it is coincidence but was the first car he looked at and was ideal as a first rally car.

Bates' only concrete goal this weekend is to last the 205km of competitive stages of the Rally of the Bay.

"I don't have any goals or expectations this weekend. I just want to get as much experience as I can," he said.

"I rolled while driving the zero car at the National Capital Rally but I know what I did wrong so I'll be a bit more cautious this weekend."

Co-driver Taylor is quietly confident the new Bates/Taylor duo will live up to its name.

"Harry's a level headed guy so he's not going to do anything silly over the weekend," she said.

"In saying that, he's a Bates - so he won't be holding back for long!"

The Rally of the Bay is the second round of the Gary's Motorsport Tyres NSW Rally Championship and commences at 3:30pm on Saturday with a ceremonial start in Clyde St.

Head to www.rallynsw.com.au/events/rally-of-the-bay for more information and spectator points.