At the conclusion of the International Rally of Queensland, a jubilant Neal Bates commented (tongue-in-cheek) that “It’s great for a privateer team like us to be on the podium as winners when you’re up against the Datsun factory team. It’s a dream come true".

Bates, relegated to second place the day before when a crank angle sensor failed, leading to the team dropping four minutes in the fourth stage, meant that the task to catch the newly recruited Jack Monkhouse, lead driver of the recently-formed Team Datsun Australia would be almost impossible.

Bates drew on deep reserves, honed from four Australian Rally Championships, and new tyres, to chase down Monkhouse in the flying Datsun 180B.

It was a clear message that youth and a two-car outfit is not to be messed with. The expected challenge from the second of the Datsuns ended the day before when a valve spring broke in the engine of speedster Ryan Smart.

Clay Badenoch, in a new Toyota RA-40, completed the podium to deliver a 100% record for Bates Motorsport built Celicas.

“I am so impressed,” a beaming Badenoch confided with the podium crowd. “The car is faster than me, but we will learn to go faster.”

Keith Fackrell, in his Escort RS 1800, rounded out the top four, putting on a great show in the process.

Bates now prepares for the Scouts Rally SA, with rumours of the Datsun team debuting a 16 valve Stanza to take the fight to Bates. Clay Badenoch will also update his engine, and spectators can expect an epic battle between Toyota and Datsun.

The spectators were the true winners. Bates, Monkhouse, Smart, Badenoch, Mulligan, Quinn and all the others delivered sideways action, thrilling the crowds who had stayed on well past the Asia-Pacific and Australian Rally Championship cars. The classics were the cars they had come to see.

Classic rallying is the fastest growing rally category in Australia, with many past champions competing. The next round is in South Australia in August.

The fact that Bates’ times were often in the top three outright places for the rally says plenty about the competitiveness of the category. 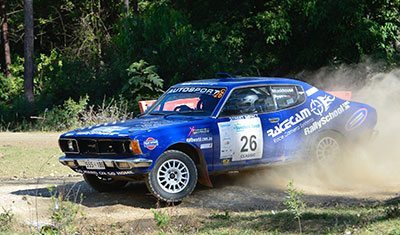