Points to consider when building a BDA engine: Part 1

The BDA engine is one of the most legendary engines ever to grace race and rally cars since its release by Frank Costin and Keith Duckworth in 1969. Like many competition engines, further development has continued as the years have progressed, and a good BDA is still one of the world’s best 4-cylinder, in-line engines available. But building a good one is an expensive affair. Simon Gardiner from PowerPlay Automotive in Melbourne takes us through the history and the pitfalls of this Cosworth masterpiece.

The Cosworth BDA is a power plant that changed the face of rallying and racing after it was released in 1969 when it was fitted to the RS1600 Ford Escort. It was originally developed as a 16-valve DOHC conversion to the Kent 1600 pushrod motor for Ford UK. The basic engine type has been built as a 1098cc unit taking it out to a 2137cc stroker. At its peak of development in 1986, it had evolved under Brian Hart’s expertise to be the BDT-E, a 2137cc fuel injected, turbocharged engine that could produce a whopping 650hp. In the early 1980s, other derivatives of these engines were used in the legendary Ford RS200 Group ‘B’ rally car, again turbocharged and injected in an 1803cc variant. For simplicity’s sake I will refer to this family of engines as the BDAs. One of the challenges facing the use of the BDA for racing has been the choice of engine and specification for the required application. While capacity choice is fairly obvious, state of tune is not. If you are trying to shoehorn a methanol-injected 1600cc open wheeler engine into your Escort you may be disappointed. A full race 1600 engine built for race fuel and with cams that come on song at 6500 rpm but pull hard to 9750rpm, can have around 225hp. 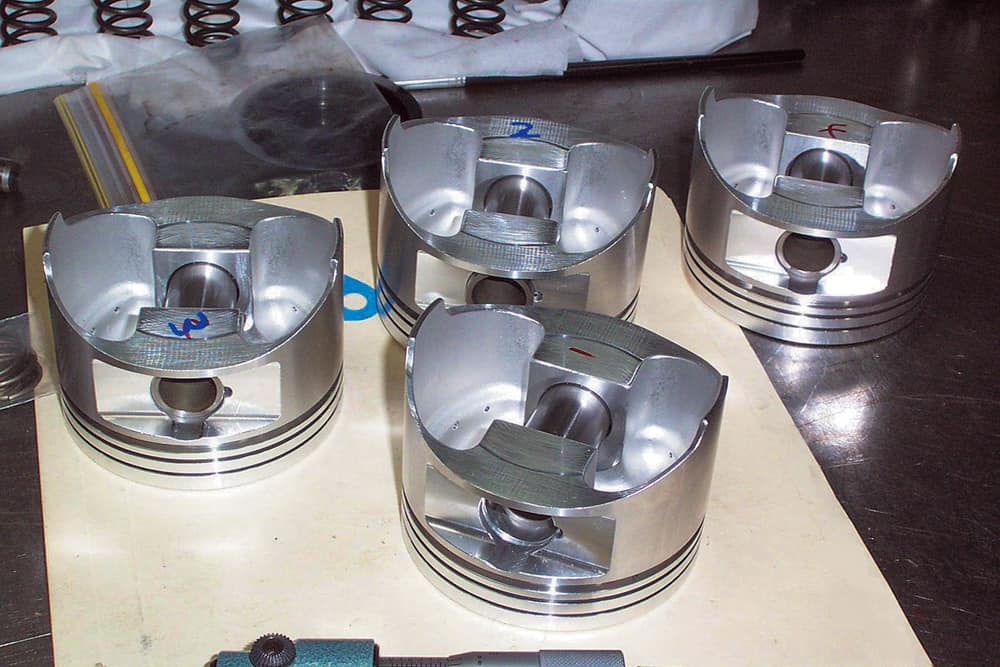 But put the same engine in a far heavier Escort rally car with two occupants and it’s a different story! It’s easy to get caught up in the numbers game. The same car with 190hp and a more friendly power band might be very user-friendly in a rally car and a lot faster because of it. We see a lot of cars that are set up so they are hard to drive but claim big numbers. As an example, the last iron block 2-litre BDA engine we built had 176ft/lb of torque and 241hp on 48 DCOE carbs and PULP fuel, and was totally street drivable. Now that’s a fun engine. Rather than chase just horsepower, let us consider a different set of questions? What is the budget for the whole package, not just the engine? What class do I want to be eligible in? Do I have to be at the front of the field? Am I committed to developing the engine as my skills increase? What will I need to earn to maintain it at that level? Do I want to run on Avgas or PULP fuel? Do I have a close ratio 5-speed gearbox or a badly-spaced set of standard ratios in a 4-speed gearbox? Will I have more fun and be faster with a broad spread of power? The BDA has gained a reputation for unreliability for the wrong reasons. BDAs are essentially a race engine. They require appropriate maintenance and that costs money and time. You can’t keep cobbling them together and expect them to be reliable. 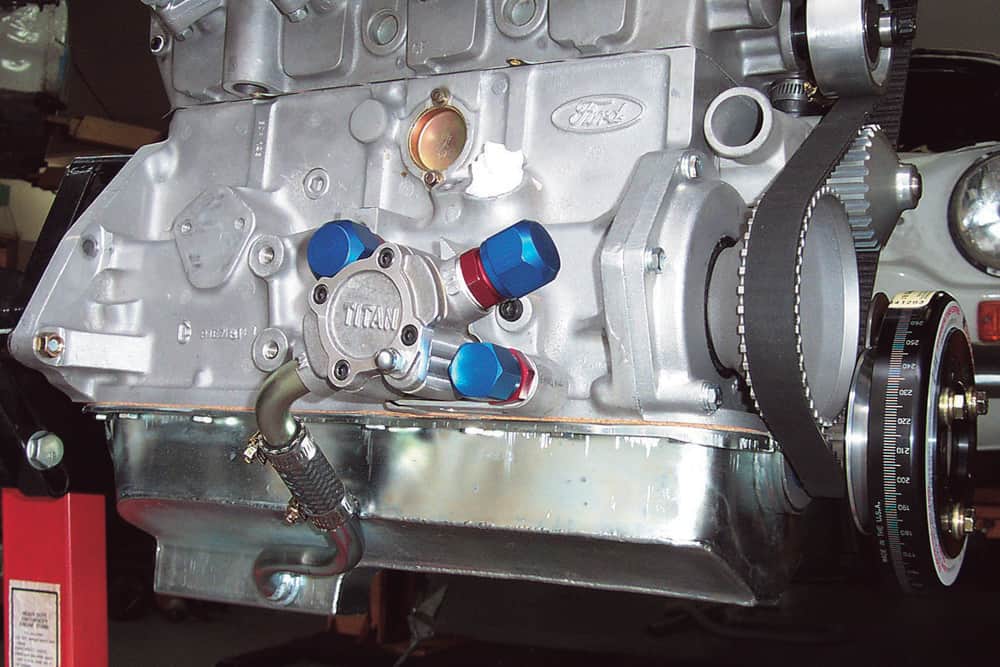 The alloy block and dry sump are an important part of the BDA's success.

Some components are highly stressed, the key is to identify which items are the engine’s weak points and to pay particular attention to those. A lot can be learned by stripping down an engine. By cleaning and inspecting all of the parts you can gain an insight as to how the engine was running, and what was wearing inappropriately. I like to do a spreadsheet detailing all the relevant issues - the engine’s clearances, components used, torque and stretch settings, camshaft and valve train information and so on. The more engines I build the more information I find I want to record. Starting with the bottom end, a key area of trouble with the BDA engine is main and big end bearing failures. If the engine is a very high revving, high horsepower delivering item as might be required in Group NC, then it is a big challenge to have good oil delivery from a standard wet sump. A lot of work will need to go into sump design to reduce oil aeration and surge to prevent bearing failure. Where rules permit, Cosworth recommend a dry sump system for the BDA so that an uninterrupted supply of un-aerated oil can be delivered to the bearings. 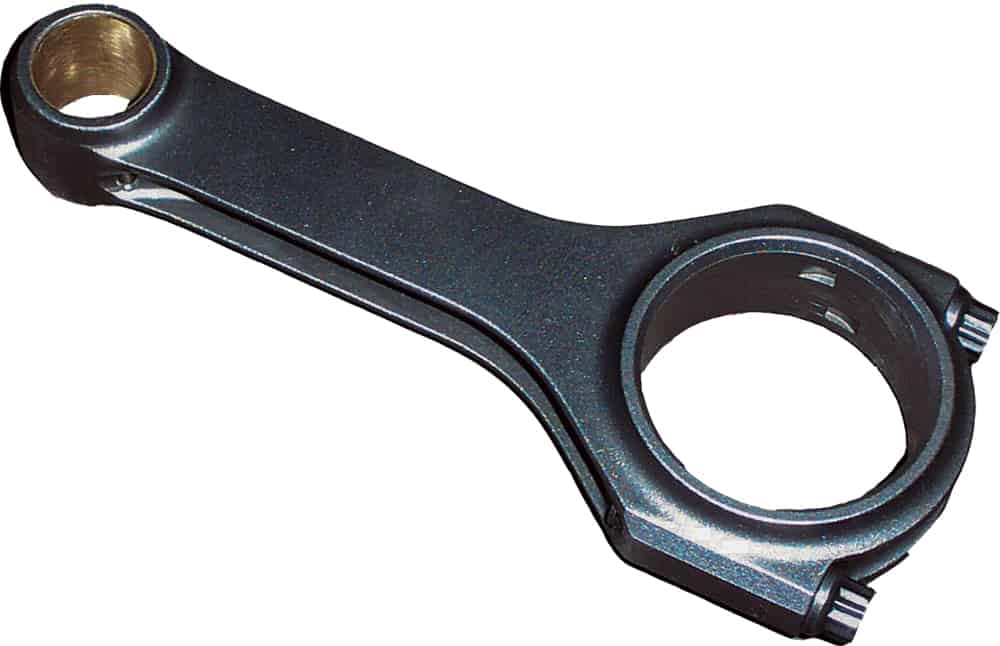 Conrods have a service life issue, but rod bolt failures are often the problem.

It is easy to get caught with wrong oil clearances. It is the job of the main bearing and conrod tunnels to hold the bearing shells in alignment. By being sized correctly the bearing shells are held by a slight interference called ‘nip’. The oil clearance is measured as the difference between the installed bearing diameter and the crank pin diameter. With too little oil film, basically the crank will rub against the bearing and bearing failure occurs soon after. Using a high quality mineral based 20/50 engine oil, I like to see 0.0022” to 0.0027” on the big end bearing oil clearance. For an alloy block, around the 0.002” to 0.0025” on the main bearings, or for an iron block again the 0.0022” to 0.0027” clearance on the mains. If the iron block bearing nip is anything less than 0.004” I start to get concerned that it is too little as the bearings may fret in the housing. With alloy block engines I like to see a higher amount of nip as the block has a higher expansion rate from heat. 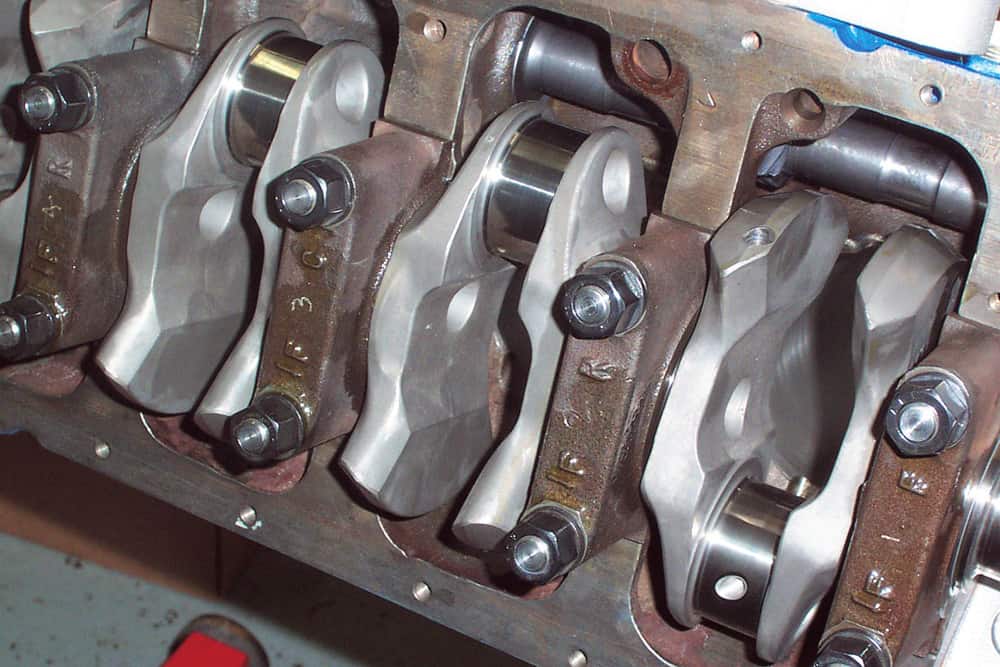 The Cosworth BDA with an iron block bottom end.

Of the big end and main bearings, it is the big ends that suffer the most from failure. They are more highly loaded and are asked to accelerate and decelerate four times in every rotation. Bearing choice is important; I like to use good quality tri-metal bearings. I have found that different brands of the same bearings often give different oil clearances. It is critical to check every tunnel, every bearing and every pin to get your clearances right and don’t just measure them in one place, check for them being round or tapered. This is painstaking but necessary. If you have had parts machined, remember, just because the machine shop provided the machined parts to you, it is still your job as the engine builder to confirm that they supplied what you ordered. 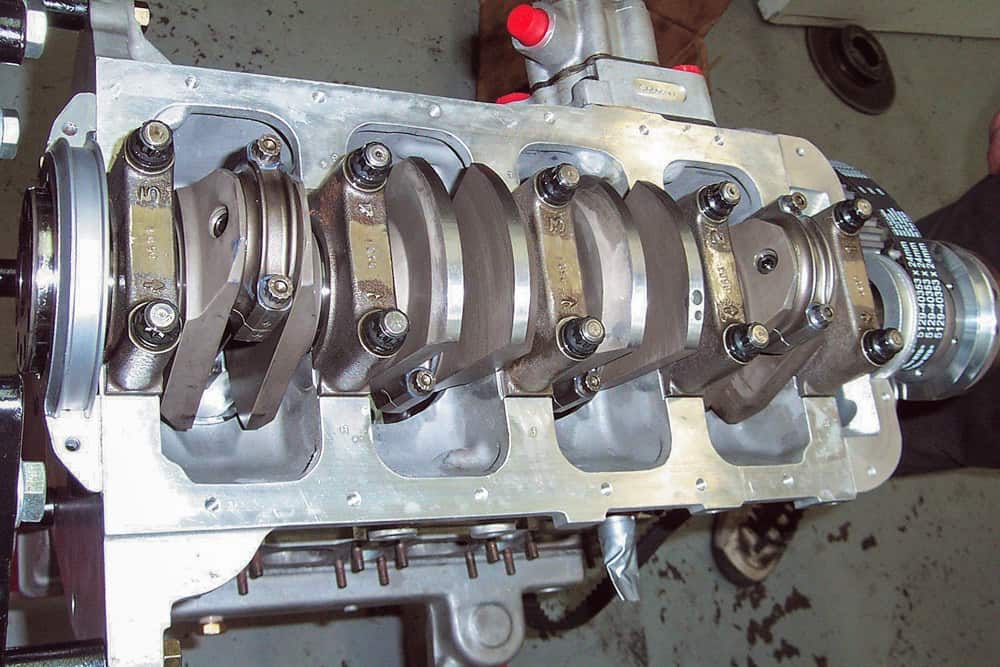 This BDA engine has a lighter alloy block bottom end.

The buck stops with you. So write out your orders and be specific; it is easier for them to do their job properly. A word on Plasti Gauge: I have found it inadequate to check bearing clearances so I don’t use it. I’m sure it is a good product and has a place, but is not for building race engines. You need good internal micrometers and a good feel to do the job properly. All parts have a service life. Metal fatigue will win in the end. If a motor has seen 1000 km worth of 9500 rpm it has probably had a harder life than one in grandma’s 20,000km Ford Laser. Blocks can crack around main caps or the caps can work loose in the block. Alloy blocks can go soft if cooked, they can have liners come loose or become more prone to threads pulling out. Crankshafts can fail, usually through the fillet radii between big ends and mains. We usually crack test all cranks, rods, pistons and blocks when building a bottom end. Basically it’s good to find out any bad news early. If parts have seen a major bearing failure and have had a lot of heat through, say, a big end pin, even if it’s not cracked, I would rather ditch it as the risk of failure has just gone up. The same goes for any other part that has seen a big overheat. Conrods have a service life issue for fatigue of the cap, beam and eye. But conrod failure is more often really rod bolt failure. These failures come from two main categories: the first is rod bolts that have failed from metal fatigue or old age. 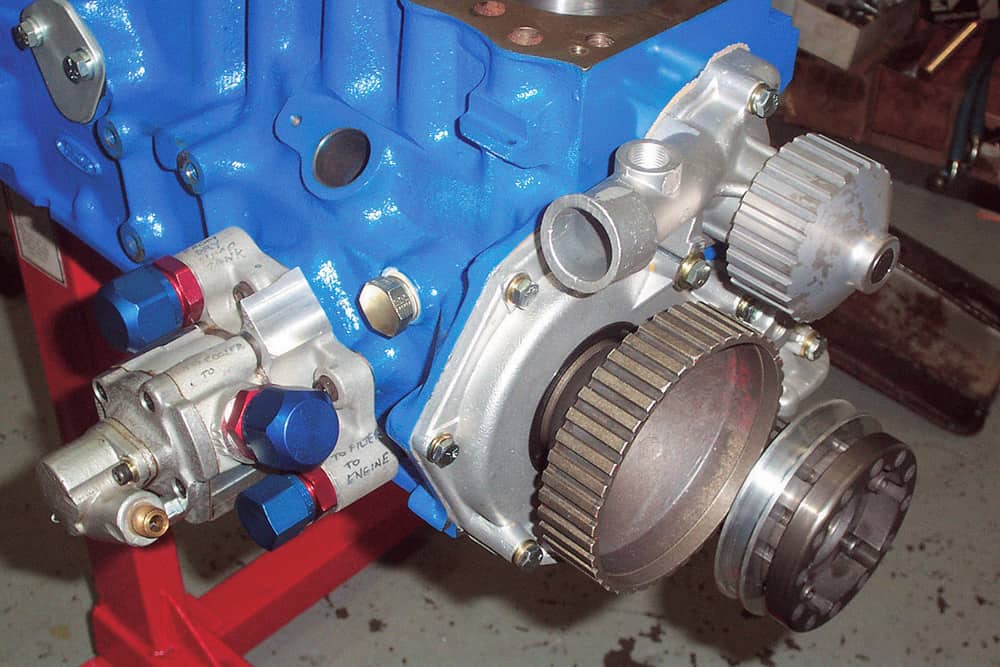 An iron block and oil pump on a BDA engine.

Secondly, those not correctly installed; this is the most common failure. If you can afford to invest in a set of high quality billet style conrods they will often come with either the CARR or ARP rod bolts. For some other conrods, for instance Cosworth conrods, you can buy decent rod bolts so opt for those. Almost all rod bolts specify that the preferred method of installation is the torque to stretch method. This requires that the rod bolt be accurately measured in length prior to installation, and then lubricated with an anti-gauling paste and tightened to a prescribed stretch; this is often around 0.006”. This is the only way to be sure that the rod bolt has the correct clamping force holding the cap to the rod.

The crankshaft will face revs of up to 9500rpm.

Pistons need the required piston-to-bore clearance measured at the piston’s gauge point. This is specified by the piston manufacturer and is often just up from the bottom of the skirt. I like to get a forged piston made to suit the specific engine’s requirements. I adjust my dimensions to suit the choice of stroke, conrod length, combustion chamber volume and compression ratio that I require. It is nice to adjust the piston crown height to achieve the desired amount of squish (clearance) to the cylinder head. You need to check this on every piston when the engine is being assembled. The last issue on the BDA is to do a physical check of your valve pockets that have been machined into the pistons. This should be done with a finished head. I like to put a bit of plastercine in the pockets and check the radial clearance, and also to check the piston-to-valve clearances. 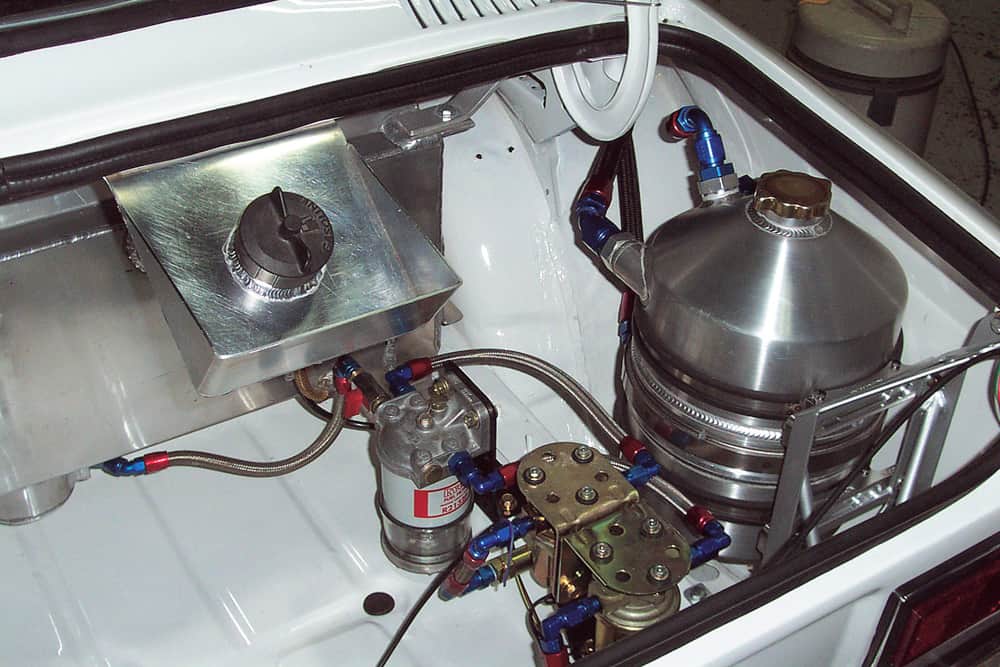 The dry sump tank and fuel system fits in the boot of an Escort.

BDAs are great engines, but with traps for all of us. They are expensive to buy secondhand and are expensive to rebuild properly. Record everything you measure and build up a library of information. Crack test everything that’s been stressed. Make sure the oil supply is good and all the clearances have been checked and adjusted. Use only good components and ditch the suspect old ones. These engines sound fantastic in anger and can make a heap of power. Good luck and happy planning. Simon Gardiner Powerplay Automotive In Part 2 of our Cosworth BDA feature, we look into the complexities of BDA cylinder heads. Read in HERE. https://rallysportmag.com/bda-good-or-bad-part-2/
VIP Exclusive Content
Get full, exclusive access for only $6.55/month.
Subscribe Now
Already have an account? Sign in