We have completed a very tough Rally Italia Sardegna - after what would be one of the most difficult events that I have competed on for the first time.

Coming into the event our target was to learn and gain miles - which we did. However, I completely underestimated the challenge of these very technical roads, which reflected in the average pace notes written from recce. This then made it difficult for the whole weekend.

Throughout the 3 days of the rally we made small improvements and learnt a lot. Most importantly we completed most of the stages and now have a lot of data that we can study. So we can now improve for our next events - including Rally Poland in 3 weeks. 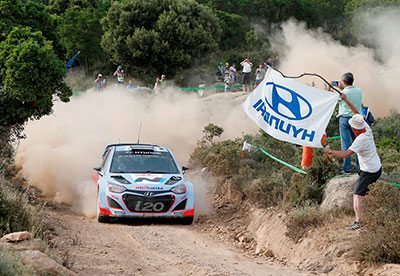 We had a relatively trouble-free run other than a puncture on day 1 that cost us over 1 minute and then having to temporary withdraw on the last stage yesterday after a water crossing caused a misfit in the engine. Despite our best efforts we were not able to get the car going again easily, so we had to retire. Nevertheless the team repaired the car overnight and we were able to complete the rally today - abielt in 12th (after 10 minute Rally 2 penalty). We also claimed the first manufacturer points for our team, Hyundai Motorsport N.

Throughout the 3 days, we were in the top 10 and this was despite on day 2 and 3 being one of the first cars on the road sweeping. As we found out, experience counts for a lot on this event, which was more evident than ever with the first stage this morning that was a new stage to the rally - and we set a top 5 stage time. So this puts us in good stead for our next event in Poland which has not been in the championship for 5 years - so more of a level playing field.

This weekend and throughout the season our bench mark is our team mate, Thierry Neuville. Despite not being as competitive as I would have liked this weekend. On average we were 0.75 seconds per km behind Thierry on the stages, and sometimes as low as 0.5. So this is pleasing and this is a gap that we will look to close on the upcoming events, which Im confident we can do.

Now we fly back to our base in Frankfurt. There is a lot of analysis to do in the meantime from both the onboard footage and then sitting down with our engineer, Clement, to go through all the data. It is going to be a busy 2 weeks in our preparation for Poland and I’m looking forward to it already.

Big thanks to everyones support - particularly the several Kiwis that we have seen here at the rally supporting us on the stages. It is humbling to be flying the NZ flag with pride. I can promise that Poland we will take another step up and from here on in we will move upwards.

You can see all our videos, photos and updates from our weekend on our Facebook page: www.facebook.com/haydenpaddonwrc