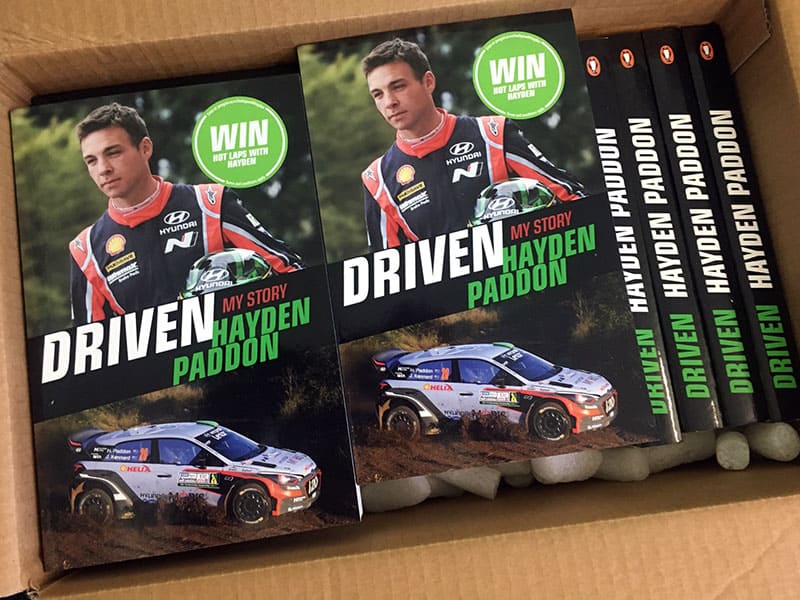 By nature, Hayden Paddon is a shy person, so opening up in a ‘tell all’ autobiography was a big step.

The Kiwi rally star still admits to not being sure about releasing so much raw information about his life to date, but it’s an incredible story that deserves to be told.

Most of us would never have known that Hayden came from a broken family, that his weight was pushing 120kg when he was just 16 years old, or that he stooped to stealing money from his father in order to pay for his petrol and junk food habits (the petrol for his car!).

Bullied at school and never one of the ‘cool kids’, motorsport was Hayden’s release and it quickly became obvious that he had a real natural ability behind the wheel.

His early cars were called “The Brick” and “The Turd”, in which he contested grass motorkhanas and autocross events that honed his driving skills from a young age.

Once his dad, Chris, vacated the driver’s seat in order for young Hayden to take the wheel, things really took off, although it was never plain sailing.

Crashes and burnt out cars added to the struggle, but through it all he showed a dogged determination to succeed.

His first sponsorship campaign involved getting local Geraldine businesses to stump up $100 to get a sticker on his car, but it wasn’t long before many other companies jumped on board to support the young man, who always said he wanted to be a World Rally Champion.

He did that when he won the Production World Rally Championship in 2011, and the rest, as they say, is history.

Rather than give too much of the book away here, it does go into great detail about his WRC career, including the tragic accident in Monte Carlo in 2017 when he crashed on the first stage, and in which a spectator died.

His debut WRC win in Argentina in 2016 is also spoken about at length.

New rallying books are so rare these days that they are usually purchased and read from cover to cover in record time, and Hayden’s new book is no different.

Honest, open, informative, and at times shocking, it is a tremendous read that any rally fan will be itching to get their hands on.

My only disappointment was a lack of photos included. Of the 320 pages, only 8 are photographs.

On the bright side, Hayden’s story is far from over, and the sequel to his first book – whenever that may be – will be just as sought after.