It was Aaron Bowering and Nathan Lowe’s first win in the SARC.The rally marks exactly a year since the pair ran the ex-Jamie Pohlner Subaru WRX for the first time.

The RAA Southern Rally was held in the Second Valley Forest and nearby Balquhidder cattle property. Balquhidder features high-speed, sweeping gravel roads with views over the Southern Ocean and Kangaroo Island, not that the crews had time to look.

Thirty seconds down in second spot were Gary Brown (also from Mt. Gambier) and Mike Dale, who ran for most of the day with only front brakes after making a temporary repair to a broken rear caliper bracket on their Mitsubishi VR4.

Tarmac rally driver Ben Calder, with the versatile Steve Glenney, were a surprise third in their Subaru WRX, a further 12  seconds down.

They fared much better than fellow tarmac rally specialists Craig Haysman and Julie Boorman, who rolled their Triumph TR7 V8 after clipping a stump on the third Springs stage.

Out early in the opening Jones stage were pre-event favorites Zayne Admiraal and Matthew Heywood when their Subaru WRX suffered catastrophic engine failure.

It was a sad conclusion to a fraught few days for the pair, engine repairs running late and Admiraal having crushed his big toe under a hoist two days before the event. 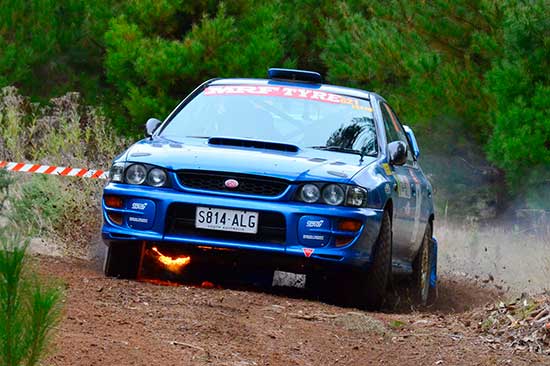 After extinguishing and hasty repairs, they continued to finish fourth, over two minutes behind Calder.

In his first open rally, Paul Knopka (Subaru WRX) and Neil Brannum were nearly a minute behind in fifth, after a conservative run with the emphasis on finishing.

The Honda Civic of Marc Butler and Peter Sims was first two-wheel-drive in sixth outright.

Matt Selley and Hamish McKendrick’s Ford Escort had a throttle cable break on its Connaught Warrior engine, causing them to miss two stages, before rejoining to eventually finish 12th.

Aaron Lowe and Matt Monto’s Commodore coasted to a retirement with no drive at the spectator point in the final Springs Reverse stage.