Calculated drive in Tasmania by O’Dowd 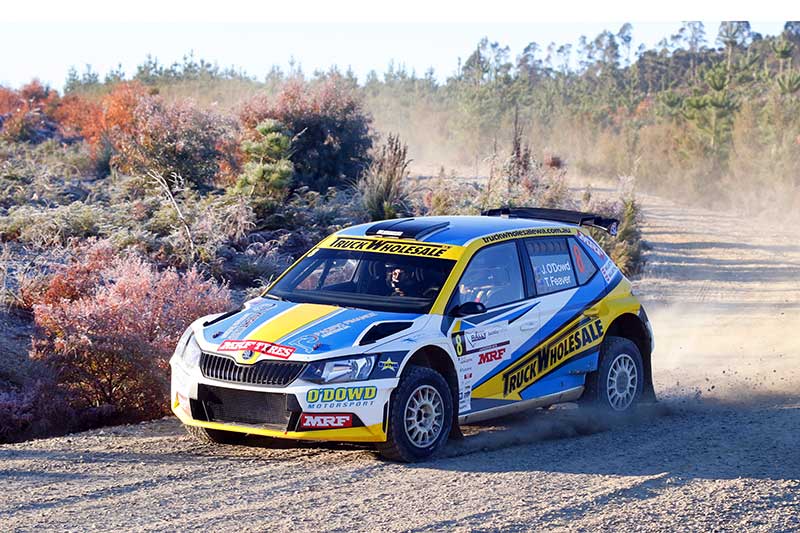 John O'Dowd had a solid run in Tasmania in his Skoda Fabia R5. Photo: Luke Whitten

Although the West Australian is well-versed with tarmac rallying in Tasmania, the cold and icy forest stages of Saturday morning were a completely new experience for O’Dowd.

“We had to be quick learners on Saturday’s stages! The morning was cold and the grip levels ranged from pretty good to zero grip,” O’Dowd commented after two intense days of rallying.

“We had a bit of a ‘moment’ on the first Saturday stage. We were in fourth gear with plenty of grip going in a corner, but then hit a patch of ice and slid across the road. Luckily we managed to catch it in time, but I think it played on my mind a bit for the rest of the day.

“We lost 30 or more seconds on the final stage of the day running on a punctured rear tyre. But I was probably just too cautious, and that showed in the stage times.”

“Sunday was much better. It was still wet under the trees, but generally the roads offered a bit more consistent grip. I think in this event, a little bit of experience or local knowledge goes a long way.

“That said, we still set reasonable stage times and got the car home in one piece. The only incident was when we overshot a corner. We lost another 10 or 15 seconds there, and that was the difference between us getting sixth for Heat 2.”

“We came here to gain experience and championship points, and we’ve managed to do that. So I’m pretty happy overall.”

The next event for O’Dowd and Feaver is Kirup Stages, part of the West Australian Rally Championship.

“We’ll get the car back to Perth as quickly as we can and prepare for Kirup. It’s turning into a busy year for us, with Kirup and then Targa West.

“I found out last year that Kirup is an event that can ‘bite’. We took a jump a bit too quick last year, damaged the car and struggled for the rest of the event. So I may be a little bit more cautious with the jumps this time!”

The ‘Wheels on Yirrigan Kumho Tyre’ Kirup Stages is held on the 6th of July with stages contested on the forestry roads to the east of Busselton.