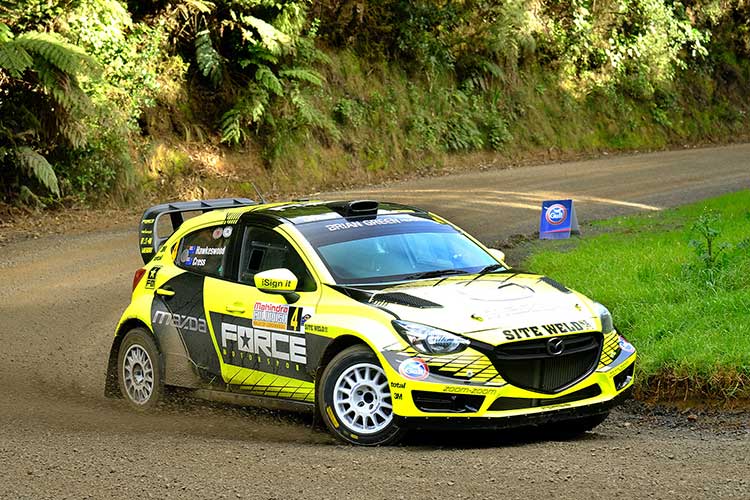 Andrew Hawkeswood heads to the penultimate round of the 2017 NZ Rally Championship as points leader. Photo: Geoff Ridder

A capacity 81 car field marks the return of national championship rallying to the Waikato and next weekend’s Handy Rentals Hamilton Rally of Waitomo.

Covering 207 kilometres over six special stages in the King Country and Waitomo districts the event is the fifth and penultimate round of the 2017 Brian Green Property Group New Zealand Rally Championship fuelled by Gull and driven by Dunlop.

An exciting range of cars and stars will compete in the Waikato with seven new breed AP4 cars, the NZRC debut of an R5 along with the spectacular array of 2WD class cars.

Leading the 81 car field as the number one seed is defending New Zealand Rally Champion David Holder and co-driver Jason Farmer. Holder will take over the wheel of Greg Murphy’s Holden Barina AP4 with the Motor Racing Legend unavailable for the last two rounds of the NZRC.

Behind Holder is current championship points leader Andrew Hawkeswood and co-driver Jeff Cress of Auckland. A front runner at all rounds of the championship to date, the Mazda 2 AP4+ driver is chasing his maiden National rally title and heads to the Waikato with a seven point lead over his closest rival Matt Summerfield the number three seed. The Rangiora Subaru driver has wins at the Whangarei and Canterbury rounds to date. The championship battle between Hawkeswood and Summerfield will be a feature if the Handy Rentals Hamilton Rally of Waitomo

Number four seed and currently third in the championship race is Nelson’s Ben Hunt, the Subaru driver has been bagging consistent points finishes to date and re-finding the form that took him to the 2015 National title. Completing the top five seeds is the spectacular Audi S1 Quattro AP4 rallycar of Auckland’s Dylan Turner and Malcolm Read which will sport the traditional Audi Group B colours for the event.

Much interest will surround the return to the NZRC of Hawkesbay driver Max Bayley. The former National 2WD Rally Champion will debut an M-Sport built Ford Fiesta R5 run and prepared by Neil Allport Motorsport. The R5 spec car, which is a feature of the WRC2 World Championship support category, is the first of its type to contest an NZRC round and many are picking Bayley to be a serious championship contender with sometime in the car.

The wide array of exciting cars and drivers that complete the full field include the NZRC 2WD, Classic and Challenge category contenders, which are sure to provide a spectacle for rallyfans.

Along with a number of prime spectator viewing areas through the event, the publci will get a chance to get up close with all 81 cars and drivers at the Newstead Lodge Ceremonial Start. Running from 4.30pm on Friday evening at Hamilton’s Rototuna Shopping Centre and featuring live music, street stalls and food outlets, a carnival atmosphere will be created to start the event.

The competition starts the following morning from Piopio in the heart of the King Country at 8am, with teams tackling six special stages via Service stops at Ohura, Piopio and Mairoa. The first car will finish at the Hamilton Car Club on Valie Road at 5.25pm on Saturday evening where the finish ramp and victory podium celebrations will take place.

The Handy Rentals Hamilton Rally of Waitomo is supported by Newstead Lodge Boarding Kennels and Cattery. Spectator information including maps will be available from the Ceremonial Start at Rototuna Shopping Centre or online at hamiltoncarclub.org.nz or nzrallychamps.co.nz

Results and live video can be found at www.chrissport.kiwi

2017 Manufacturers Championship Standings – after round 4 of 6.