Queensland-based Atkinson reached the final along with team-mate Patrik Sandell, however, an unfortunate electrical fault slowed the Aussie’s pace, resulting in an eighth overall finish.

Scott Speed took the round win, and with it, the championship lead ahead of Tanner Foust.

The new racetrack and format did not slow Speed, a two-time GRC champion, as he won pole and multiple heat and semi-final races.

Atkinson, competing in his first full season in rallycross, won his first heat race on Saturday on his way to the final, and believes the team is moving in the right direction.

“The team has moved a good step forward; we won that heat early on and we’ve shown some good pace,” explained Atkinson.

“It’s an all new car so we are still improving all the time on the handling setup, but the nice thing is we have barely reached its potential yet and we are already winning Heat races, so that gives us a lot of confidence. I’m really looking forward to the next round.”

The next round of the Red Bull Global RallyCross series moves to Louisville in three weeks’ time. 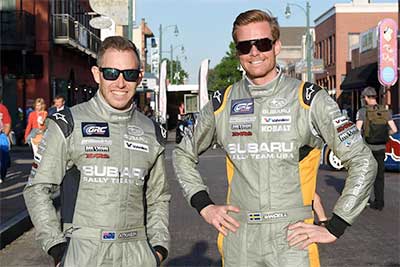