Citroen looks ahead to 2017

Citroen Racing is sitting back at the moment waiting for the debris from the Volkswagen withdrawal earthquake to settle, wondering if they will fit into the new driver scene for 2017.

Citroen Racing team manager Marek Nawarecki.2016 was an interim year in the competition activities for Citroen as the era of running cars which carried the DS3 name on 2015 cars came to an end. This was the transition period when their DS3 WRC cars were run by PH Sport while Citroen Racing itself made themselves ready to run the new C3 WRC cars.

Citroen Racing operation central management closely watched what was happening in 2016, so we asked Citroën Racing's team manager and customer racing manager, Marek Nawarecki, for a resume of how things were working.

Does he agree that the period with PH Sport running the team worked well?

MN: I would say it was even beyond our expectation.  Our aim was to have more experience for our drivers to prepare for next season, to be in the competition, to have the possibility to compare them with the level of other drivers in the championship, and finally they managed to win two events.

This was something we did not expect.  It is nice to know that even with the reduced size of the team and the available material it was still possible to compete in WRC, to be sometimes very close to the top teams and even win the rallies.

MH: And the only negative thing was poor Stephane Lefebvre’s accident?

MN: Yes.  It was during an unplanned event which was an extra rally in his programme.  He managed to organise this extra event with his sponsors and unfortunately the accident cost him some events at the end of this season.

So for next year for sure he will not be having the experience from Spain and Corsica, but at the beginning of this season Stephane also did some good rallies, increasing his speed.

MH: At the beginning of the year you knew that three drivers (Meeke, Breen and Lefebvre) had the possibility to drive in your team next year, but did you know that you would run all three or did you think that you would have to decide two from the three?

MN: At the beginning of the year we didn’t know that we could run three drivers on events in 2017, then the regulations changed.  It was quite late in this season that we learned that each manufacturer will be allowed to enter three cars and two best cars will score points.

Even if the championship may not be our first objective for next year, it became obvious that we needed to run three cars, so we decided to adapt all thee drivers line-up for next year.

MH: What have been the emotions of the drivers testing the 2017 car?

MN: Yes all three had already driven the new car.  I think that Kris (Meeke) and both the young drivers were very pleased to drive the new car, which as we know is so different from the current car, because of the different technical specification, more power and more traction with the central differential.

I think that this car will be closer to what we can call the rally spirit we used to know from the past, and they enjoyed the cars a lot on both gravel and tarmac.

MH: Of course Kris and Stephane (Lefebvre) were a well known capability for you, but you didn’t know so much about Craig Breen.

MN: We invited Craig into our team this year because we did our research and knew that he had really good experience, he had proved that he is able to drive on a very good level.  He also knew some rallies from the championship quite well.

He was invited because of all those things and also that he is one of the most consistent drivers from his generation.  So of course we did not know if it would work or not in a proper WRC car, but since the beginning I think Craig did a lot of work and he prepares the rallies well.

Since the beginning we saw even on the test sessions that he’s able to drive on a very good level and we saw in Finland, which is one of the most difficult rallies for drivers, that he achieved a very good result.  So I’m quite confident for the future for him, but next year it could be another story… 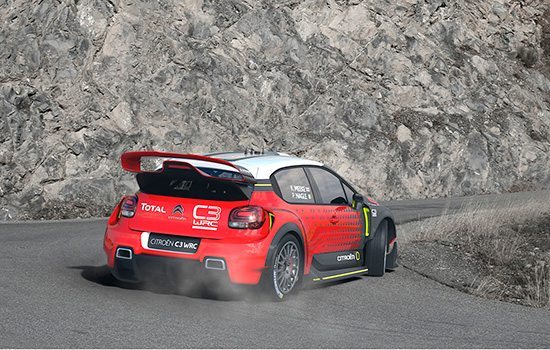 Citroen's 2017 C3 WRC will debut at the Monte Carlo Rally.MH:  What is your opinion about Stephane in a World Rally Car?

MN: Stephane has very good experience as well, but I would say he needs more mileage.  He is surprisingly fast, especially on tarmac.  On the rallies he knows he’s able to get good results and a good performance.

He didn’t show as much consistency as Craig, but this is something which I would say is quite normal at this stage of the career.  When the driver is fast and he just needs time to adap,t I think needs to have more mileage to be consistent.

MH: The team now goes back to Citroen Racing. In reality how different will be the people working in the team next year to those at PH Sport this year?

MN: At PH Sport this year we were not so far from our old team, giving all the information from the technical side and supporting PH in all the sporting programme, in the various aspects.

Next year for sure it will be a different team from a technical side, with much more involvement of the technicians and of the engineers from the development work during the race.

In 2016 we have only one engineer per car and that’s all, and it was a very, very small team.  We have not decided yet, but maybe we will continue some collaboration with PH at some stage, but the team basically will be different.

MH: What is the plan for the 2016 cars, will PH Sport continue to run the existing DS3 cars with private drivers?

MN: We still don’t know really the final regulations for those cars next year.  There will be some discussion about the future of the current cars.

MH: You and Yves Matton will again be involved next year?

MN: Yes, I hope so!  Both of us will be following the programme.