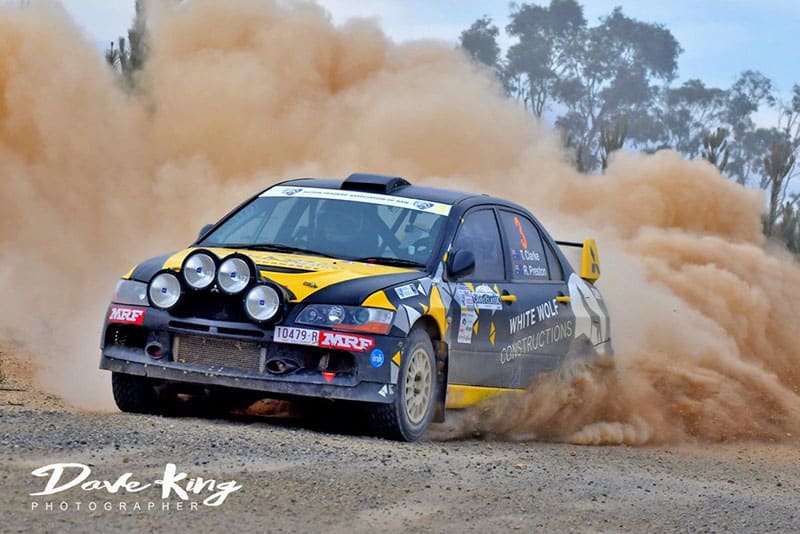 Clarke last competed at the ARC in the 2017 Kennards Hire Rally Australia where he finished second behind outright champion Nathan Quinn, and has since been focusing on the MTA CAMS New South Wales Rally Championship.

However after more than a year away from the national Championship, Clarke believes his Mitsubishi Evo is ready for a solid outing in Canberra with the new one day format allowing him the opportunity to overturn his poor record there.

“Canberra has never been kind to me and I have never really finished an event there so I need to redeem myself,” Clarke said.

“I have ran in Canberra three times in the past six years and I have had monumental crashes every time I have been there, walking away with a wrecked car.

“I am hoping I can redeem myself and at least put on a good display there, come away with a clean car and a half decent result.

“I think the one day event will definitely help me because generally the forest on the second day has always caught me out, I have rolled on the Hyles Block I stage three times.

“People have asked me if I am going to slow down during the Nat Cap this year, but to be honest I don’t have the attitude in me to back off.”

Clarke’s form in the state championship has also seen a mix of results where he has failed to finish both rounds in 2019, but his Evo has still shown signs of dominance when he was on track.

In New South Wales’ most recent round, the Singleton Automotive Centre Caves Classic Rally in Oberon, Clarke managed to win four of the nine stages but suffered mechanical issues on the third stage which prevented him from getting a strong overall result.

With the car now in better shape after some time in the garage, Clarke is confident he can produce solid performances at the highest level.

“We are just tinkering away in the NSW championship but every now and then I don’t mid joining the ARC to see if I can give the guys a bit of shake,” Clarke added.

“We don’t really have the car to keep up with the guys at the front but we can generally get in there and have a go anyway. If we can get up to the top five I would be really happy with that.”

As for the rally itself, while redemption is his major goal, Clarke will have one focus when it comes to racing.

“One goal for us is to finish the rally,” Clarke said.

“We have had a pretty good run these previous couple of years when it comes to our driving skills, we’ve just been super unlucky on the mechanical side of things which is something I would like to tidy up.

“Hopefully we’re on top of that now and we are due for another clean run soon, so what better way to prove ourselves than the Nat Cap rally. If we can tail on the back and show the Evo is slightly completive with the top guys, then I will be stoked.”

The Netier Capital Rally takes place on May 11 in the forests around the forests of Canberra.