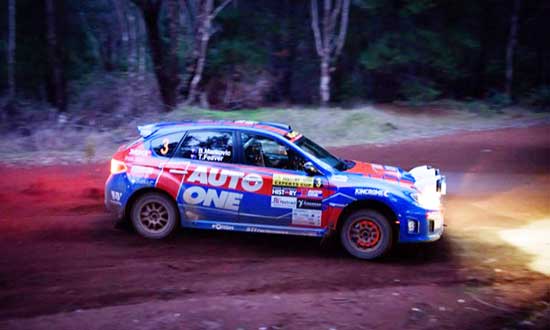 Competitors prepare for battle. Round five of the CAMS Onslow Contracting Western Australian Rally Championship (WARC), the Wheels on Yirrigan Kumbo Tyre Kirup Stages rally, will be hotly contested on Saturday along forest stages near Grimwade and Kirup, about 220 kilometres south of Perth.

With just 32 points separating the top three outright in both drivers and co-drivers standings, and just two WARC rounds to go, the competition is likely to be fierce.

Leading the WARC and making history doing so is 2WD competitor Tom Wilde and his co-driver Madelin Kirkhouse in their Verandah Apartments sponsored 1993 Honda Civic.

Wilde / Kirkhouse took the lead of the WARC after winning round one, the Trade Hire Kin Kin Rally, the first outright win for a two-wheel drive car since 1994 when multiple WA State Rally Champion Bob Nicoli finished fastest in his Daihatsu Charade.

In round four, Wilde / Kirkhouse won the 2WD category and finished in fourth place outright.

“I do like the Kirup rally, it’s one of my favourites and it’s really fast but technical at the same time,” Wilde said.

“It’ll be flat out for us from the get go as we need to try to keep in front of John [O’Dowd]. He’ll have more power and traction, so we need to be pushing regardless.

“Kirup should reward those who have good notes between driver and co-driver, and I reckon Maddie and I will do well, so I’m feeling pretty confident hanging onto our Championship lead,” the cheese maker from Nannup said.

Hot on his heels is Maximum Motorsport driver John O’Dowd and co-driver Kenneth Sheil, trailing by 30 points and hungry for the win.

“We’re still within striking distance of the title,” Gooseberry Hill resident O’Dowd said. “So it’s really important we do well in this event.”

O’Dowd and Sheil had their best result of the 2017 WARC season at the previous round, the Make Smoking History Experts Cup around Collie in July, where they finished second in their Subaru WRX STI.

Markovic isn’t competing in Kirup. He sustained a back injury at Carringtons Safari two years ago fracturing two vertebrae and had surgery on his back just a few weeks ago.

“The surgery was a success and it feels really good to be pain free, but there’s a while to go before I jump back in the driver’s seat. There is a chance I’ll come back for Carringtons Safari in October, but my focus is on making a full recovery, and I’m planning on coming back even faster next year!” said Markovic, in good spirits.

With 40 points awarded for first, 33 points for second and 30 points for third, the championship is still wide open.

Event Clerk of Course Tony Floyd said that the rally consists of three stages that will be run twice, all with changes from last year’s event.

“We’ve made some changes and made the rally slightly longer. There’s a great mix of roads with a pile of tight technical stages and some fast flowing roads that remind some people of Finland,” Floyd said.

“The stages have held up remarkably well after all the rain we’ve had and we’ve got a couple of cracking easy-to-get-to spectator points where you can get a good look at the cars.”

Follow the signs from the centre of Kirup to find the spectator points, or visit http://www.rallywa.com/rallyevents/kirup-stages/.

Full details of current championship standings can be found via www.rallywa.com/points