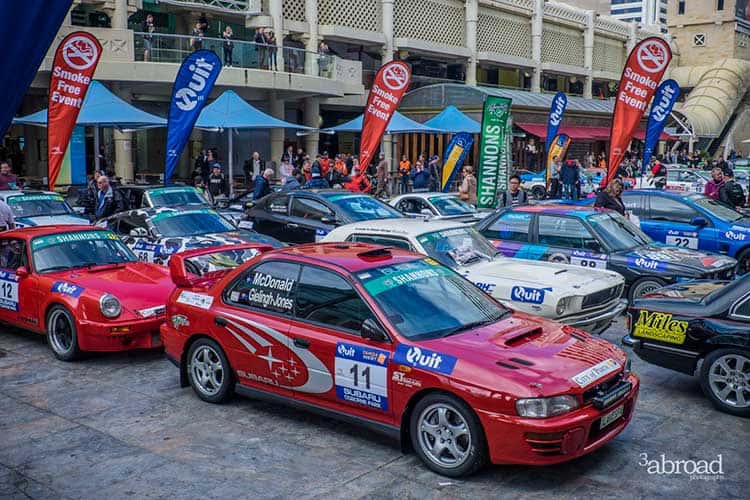 After being flagged off by Lord Mayor Lisa Scaffidi who officially started the rally, competitors headed to Wanneroo for the rally’s first three stages and then onto Malaga for two night stages. Competitors enjoyed dry conditions over all five stages.

Quit Targa West is divided into Competition and Challenge categories with classes for Modern and Classic cars in each. There’s also an award for the Quit Targa West Rallye Rookie (first timer). The Challenge category is for showroom style or non-roll caged vehicles. Vehicles manufactured earlier than 1985 are classed as Classic and the Modern class for vehicles manufacture from 1986 onwards.

Winning every stage of the day in their Porsche 996 Turbo, Major and co-driver Ben Searcy have a narrow 8-second lead over Peter Rullo and James Marquet in their 2012 Nissan R35 STR.

Major said he was happy to open Quit Targa West with a clean sweep of stage wins.

“We had a good day and the car is good, just a few little handling issues which we’re sorting out. To be honest, I haven’t driven it properly since Targa last year besides the recce, so it’s nice to get back in to the rhythm of driving a rally,” Major said.

“Ben and I have worked well which is a good thing given it’s our first rally together.

“On stages like today, I don’t really have to think about what Ben’s saying, it’s pretty straight forward. Tomorrow where the stages are longer, faster and more technical is when I’ll be relying on him to make the right calls at the right time. I’m looking forward to it,” said the 32-year-old owner of Tyres and More Mobile and Totally 4×4.

Peter Major has won four of the last seven Quit Targa West events, finished second in another and fourth in the Classic category.

In current third place is Will White and Matt Thompson in their 2006 Mitsubishi Lancer Evo 9, trailing Rullo / Searcy by just 12 seconds. 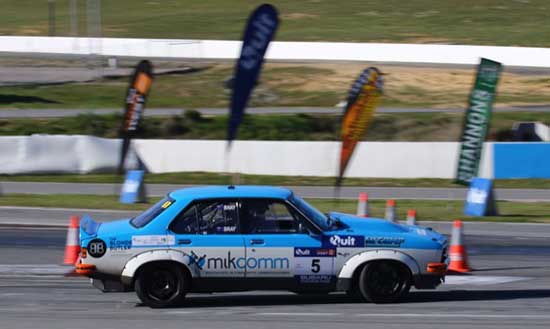 In the competition classic, brothers Mick Bray and Daniel Bray have just snuck in with a 1.6 lead in their 1975 Holden Torana over current title holder Simon Gunson and Murray Armenti in their 1971 Ford Capri Perana.

Mick Bray said that his nerves calmed down as soon as he got started at Quit Targa West.

“Waiting for the start in Forrest Place was building my nerves to be honest!” Bray said.

“Once we got going, it was fun, but I had a little scare at Wanneroo where I came in a bit too hot and spun around – I did a 360 – and didn’t hit anything, just some flags. I was alright after that,” the 40-year-old communications business owner said.

In third place behind Gunson by less than 12 seconds are Simon Line and Andy King in their 1974 Proche 911.

The rally’s only all-female team, Sharon Gunson and Helen Lunsmann of GTI Girls Racing finished on top today in their Mitsubishi Lancer Evo 7, 14 seconds ahead of rookies Nick Bailey and Kyle O’Neil in their 2010 Volkswagen Golf GTI.

“We did a sun dance all night and I’m delighted it didn’t rain today,” Gunson said.

“We had a ball, a smooth and trouble free run, the car was really good, so yes, I’m really happy.

“There’s a bit of pressure now we’re on a hat trick for Quit Targa West, and another win would be lovely, but we race our own race, have fun in the process and the results will be what they will be. I’m looking forward to it.” Gunson said.

In third place at the end of Section 1 of Leg 1 are Justin Gan and Greg Levene in a 1978 Porsche 911, trailing second place by 1 minute and 23 seconds.

Tomorrow, competitors head to Whiteman Park and the Perth Hills for the second section of Leg 1 where they will race the clock over 65.10 competitive kilometres.

The 13th Quit Targa West has attracted 64 rally teams in a mix of performance, classic and exotic vehicles.

Competitors will race the clock on 34 stages over 242 kilometres in Malaga, Wanneroo, Whiteman Park, Kalamunda, Toodyay, Chittering and Bullsbrook before the finale on Sunday 13th August at the City of Perth Super Stage and Shannons Classics car display at Langley Park from 12pm.

Spectating is free and all 34 stages feature a number of locations where the public can witness prime motorsport action.

On Friday 11th August, cars will on display at the Northbridge Show and Shine on James Street from 6pm to 9pm.