With the title fight the most exciting for years the third round of the 2017 FIA Asia-Pacific Rally Championship (APRC) will really heat up this weekend as the competitors’ line-up for Malaysia’s Rally of Johor, an event known for its extreme weather, heat and humidity.

After reigning champion Gaurav Gill won the opening round in New Zealand with MRF team-mate Ole Christian Veiby finishing second, the Norwegian fought back with a victory at Rally Canberra in Australia. In the championship standings Veiby is now leading, but just two points ahead of Gill.

While he has no experience of the Malaysian conditions Veiby may have a slight edge, fresh from the intense competition of the WRC he will also have the use of a near new Skoda R5 that was delivered to the MRF Racetorque prior to the event.

Discount Gill at your peril though as for a start the heat in Malaysia is similar to his home in Delhi India, while the 35-year-old and last year’s winner has vast experience of the narrow ditch-lined plantation tracks. It’s going to be an interesting battle.

And while the MRF drivers lead the points race, Finland’s Jari Ketomaa and Robert Blomberg from Sweden are starting to threaten the Skodas as the MPart Mitsubishi engineers find more speed and performance from their AP4 Mirages. The team and Ketomaa started their APRC campaign in Malaysia last year, so with plenty of data and experience they will hopefully be on or near the pace of the R5 Skodas. 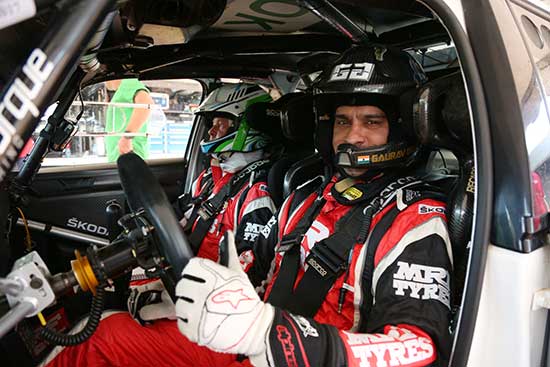 A third car was sent from MPart’s base in Sweden to Malaysia for experienced APRC Indian driver Sanjay Takale, however its journey was severely delayed and the race is on to prepare the Mitsubishi for the start. With plans to compete in Japan and his home event in India, Takale may end up using Rally of Johor to sort and learn his new car.

Japan’s Cusco Racing makes a welcome return to the APRC with New Zealander Mike Young in a Group N Subaru Impreza. His Japanese team-mate Yuya Sumiyama was entered in a similar car but at the last minute a deal was done by the team to buy the MRF Skoda that Veiby used for the Pacific rounds.

There was an excited buzz around the team at pre-rally testing with Sumiyama quickly on the pace of the Skoda’s and Mitsubishi. Given his experience of the Malaysian conditions and third overall here last year in a Group N car ‘Sumi’ may well spring a surprise.

Adding to the line-up of drivers from India is PG Abilash who will drive a Group N Subaru Impreza, a car that featured in the 2009 Malaysian Rally when it was driven by Australian Cody Crocker who went on to become the APRC champion that year.

With Gill and Veiby running MRF Tyres, the Mitsubishi’s of Ketomaa, Bloomberg and Takale on Michelins, Young supported by Dunlop Japan and Sumiyama using Yokohama tyres, the battle of the tyre brands will add a further element of interest to the event.

Having the best car and tyres will come to nothing though if you can’t handle the heat and humidity of the Malaysian plantations. When temperatures inside the cars often exceed 50Cs it’s the one event where a cool-suit (ice cooled water pumped through a special shirt warn under driver’s overalls) and plenty of water and mineral drinks is essential to beat dehydration.

After a super special stage gets the rally underway on Friday evening, the Rally of Johor will see competitors tackle seven stages over 158 kilometres on Saturday. The longest stage of the day is the 31.67km Tai Tak – Pipeline stage, that will be run twice.

On Sunday, a further six stages will face competitors, over a competitive distance of 76.24 kilometres.

With hot and humid conditions expected, and the high chance of torrential rain, the event will be a real test of man, machine and tyres – something all the drivers and teams relish.