Canterbury’s Onepunga Road in New Zealand’s South Island returned to the Autosport Gravel Sprint Series for 2017 and provided an extremely close run battle between many of the current front running talents.

Matt Summerfield continued on his winning way. (Photo: Kevin Corin)Onepunga Rd starts with a short run down to a narrow bridge before a short, steep zig zag. Things open up from there, but are made interesting by another short zig zag near the end and a bunch of small brows and corners approached at high speed.

There are a real mix of conditions in the 4km sprint which tests both low and high speed cornering, along with how much power can be put to the ground in the steep zig zags.

NZRC contender Matt Summerfield, 2017 NZ Hillclimb Champion Matt Penrose, and regular gravel sprint winner Mike Tall would lead the charge in the 21 strong 4WD Class. All three are used to winning and have shared recent event wins between them. They would fight like junk yard dogs for the win at Onepunga Rd.

Penrose was three seconds back in the first run, two seconds ahead of Marlborough’s Jason Clark who, with SH1 still blocked, had come the long way around to test his Evo 5 before the next rally. 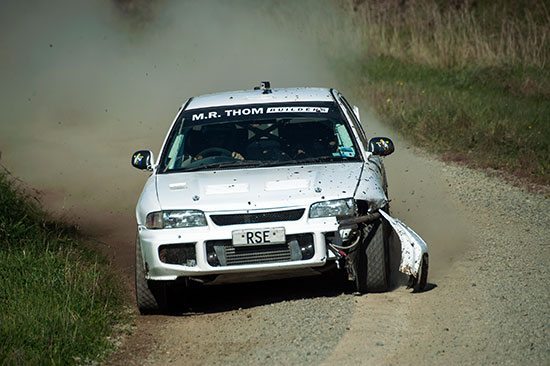 Sheldon Bell showing the scars of battle. (Photo: Kevin Corin)A few ran into trouble in run one. Jeff Judd knocked a tyre off a rim of his Impreza near the start and would not complete the run. Richard Baddock also DNF’d in the Impreza he shares with car owner Sean Haggerty. Sheldon Bell took the left front corner off his Evo 3 on a post and was lucky to be able to continue to the finish. There were no major dramas though and all 38 drivers would start run two.

Penrose had his Impreza up to the pace in run two, jumping up to second behind Tall, with Summerfield dropping to third. There was less than 1/10th of a second between Penrose and Tall, and Summerfield had just under a second to find over the 4km course.

In the Open 2WD class, Wade Henshaw in his RX7 had made a one second gap on Tony Gosling and Garry Hawkes in their Mk2 Escort BDAs, with Gosling ahead of Hawkes by just 36/1000ths of a second going into run three. Clearly it is not just tar seal motor racing that can produce times separated by a few 1000ths of a second.

Times would drop again in run three with Matt Summerfield posting the fastest time of the day in his final run in his Impreza with 2:36.074. Tall was just 23/1000ths behind to be given second place, ahead of Penrose who missed the win by around half a second. The win could have gone to any of the three, but it was Summerfield’s day.

Jason Clark was made to fight for fourth by Jeff Judd, who held the place going into the last run. Clark would be the victor by 8/10ths in run three. There are not many gravel roads in the South Island that Jeff Judd doesn’t know from memory, but Onepunga Road is one, leaving him regretting missing the chance to begin learning the road when he took the tyre off at the start of run one.

Rodney Lange got his Evo home sixth of the 21 4WDs, ahead of the relatively inexperienced Sheldon Bell. Trevor Crowe (Impreza), Richard Baddock, then Sean Haggerty rounded out the top 10. 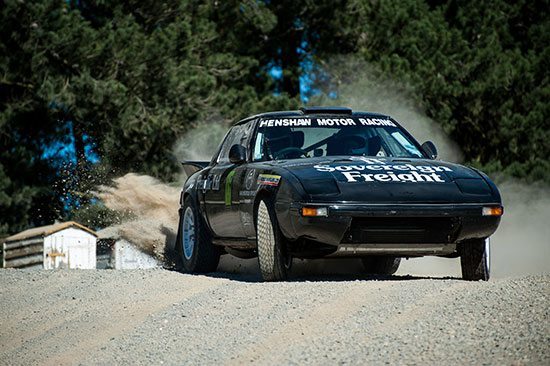 Wade Henshaw was spectacular in his Mazda RX7. (Photo: Kevin Corin)In the Open 2WDs Wade Henshaw kept ahead of the scrapping BDAs to take the class win. Hawkes went slower and Gosling did not register a time in run three, leaving Gosling in second and Hawkes third 2WD in the results.

Phil Walker got his RX7 up to fourth ahead of Alister McLean in a 2-litre Fiesta recently imported from the UK. Alister’s son, Chris, gave his similar Fiesta to his navigator Sarah Brennan to drive for the day. Sarah brought the car home sixth and no worse for wear after an exciting day of learning for her.

The 1600 class was again short on starters, giving a podium to all three. Glen Daly won that battle at a good pace in his Mk1 Escort, ahead of Sam Barnes in a Swift GTI and Michael Veronese, who made his debut in a front-wheel drive Toyota and won a trophy to show for it.

The 1300cc class has sprung to life in 2017 with seven starters and a few more cars due to debut anytime soon. Chris Herdman has been the pace setter in his Starlet for a while, and again sat at the top going into run three.

His usual challengers in Grant Goile (KE30 Corolla) and Graeme Wilson (Suzuki 4 valve powered Starlet) were close, but Wilson had spun at the first zig zag in run two and lost 20 seconds doing a five point turn. With Herdman’s recent domination, some people start asking questions, but it was clear watching him go through the first zig zag that it is good driving in a fairly well sorted car that is bringing him the results. 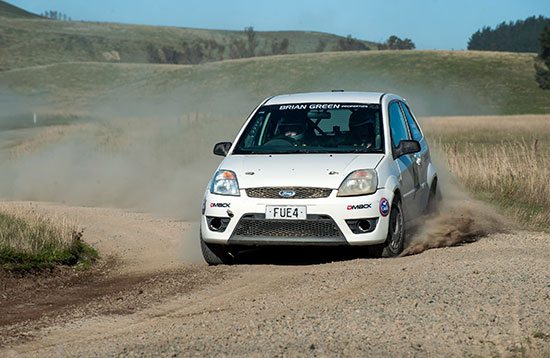 Sarah Brennan in her Ford Fiesta. (Photo: Kevin Corin)Onepunga Road would be the day a new challenger arrived to break the 1300cc status quo. Peter Murch put in a blinder in the last run, taking the 1300 win ahead of Herdman. Murch dabbled in gravel 30 years ago and has, in recent years, been an active competitor in tar seal sprint and race events.

His Starlet is also Suzuki (GTI Swift) 4-valve powered and was used by Mike Tall to dominate the 1300 class back in the 2000s. The side wall of a building collapsed on to the car in the Christchurch earthquakes and Murch has since acquired the car. Onepunga Rd was his third event in the car. He made it clear to all that he will also now be a challenger in the 1300 class.

Graeme Wilson recovered to take third in the 1300 class, a little over half a second behind Herdman. Goile had to settle for fourth, just ahead of young rookie, Ryan Blacktop, who was there or there abouts with the leading pace in his Starlet.

The third round of the five round Autosport Gravel Sprint Series is just days away and will provide another great bit of road at Mt Alexander in North Canterbury. With a couple of concrete bottomed fords, some fast straights and some tricky corners, it then ends with a big and steep climb. The many battles will recommence at Mt Alex.