Chris Atkinson will be looking for a strong result when he begins his Red Bull Global RallyCross campaign in Memphis this weekend.

Chris Atkinson is ready for the 2017 GRC. (Photo: Ben Haulenbeek)After formerly driving for Subaru and Hyundai in the WRC, the Australian will compete for the Subaru Rally Team USA, aboard their #55 Subaru WRX STI.

Atkinson, who will compete in all 12 rounds of the championship, is thrilled to be back behind the wheel of a Subaru again.

“It's awesome to be back with the brand that helped launch my WRC career,” he said.

“Subaru has a rich history in motorsport and its fans are so passionate across the globe, and that’s no different here in the United States.

“I've got heaps of great memories with Subaru and hope to make plenty more moving forward with this team,” he added.

The Subaru Atkinson will pilot, like his rival manufacturers (Ford, Honda and Volkswagen) has 600 horsepower and is capable astonishing speed.

“It's unreal (the car). It's honestly the fastest, craziest racer I've ever driven!” he said.

“The torque out of these things thrashing around circuits with 600bhp under your boots is amazing. Every time I get behind the wheel of the Subaru GRC car, I can't get the grin off my face!” 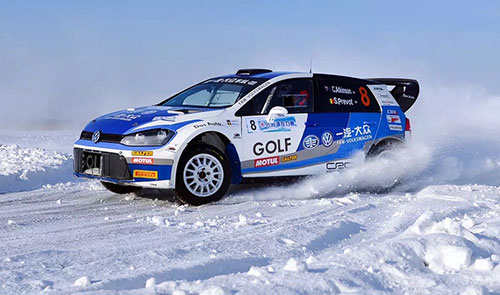 Atko is confident of success with Subaru in 2017. (Photo: Ben Haulenbeek)The series, with rounds in both the USA and Canada, will pit the likeable Aussie against drivers such as Tanner Foust, Scott Speed and his Subaru teammate, Swede, Patrik Sandell.

Foust and Speed will both be driving Volkswagen Beetles again this season, after Speed took the drivers title, and Volkswagen the manufacturer’s title in 2016.

Atkinson is confident the Subaru can match it with the best in the series.

“Last year we managed the team's first pole position and this new car is feeling better than ever.

“Every single member of the team has stepped up and I know we will continue to fine tune this car into a race winner.

“The guys from both Vermont Sportscar and STI have been working tirelessly in the off season and invested plenty into this upgraded Subaru GRC car,” he explained.

“We tested earlier this month and it's come along heaps, so I'm really looking forward to taking to the track and seeing where we sit with the other competitors.

“I hope both Patric and I can pay back the favour for all the hard work, with plenty of silverware in 2017,” he concluded.