Could this be Australia's next rally star? - RallySport Magazine
× 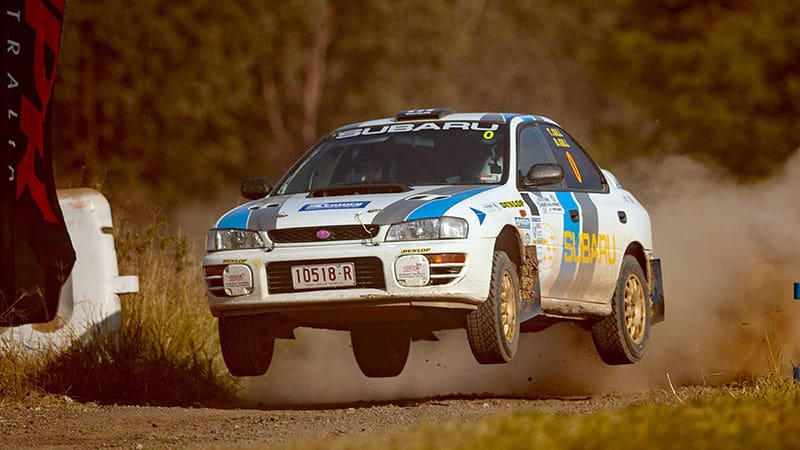 Taylor Gill is only 15 years old, and just after his 16th birthday, he’ll be competing in his first ever rally – the Australian round of the WRC!

When he was 14, Taylor competed in his first rally style event, the Sydney based Whiteline Tarmac Rallysprint at the Sydney International Dragway. The event is held on closed private tarmac roads on and around the drag-strip and is a favourite event for many Sydney based rally and race drivers.

He missed the first round of the series back in 2017, as he wasn’t quite old enough to compete in a rally, but as soon as he turned 14, he was on the start line ready to go (see video below).

He and his dad built a Subaru WRX rally car, and with a background in karts, Taylor was immediately quick when he moved up into a full sized sedan.

He has aspirations to be a rally driver and at this year’s Whiteline Tarmac Rallysprint Series, he’ll be part of the Hyundai Junior Development program.

This initiative by Hyundai N-Performance gives junior drivers the opportunity to drive a fully prepared Hyundai hot hatch in one round of the series. It also includes tuition and mentoring from one of Australia’s best rally drivers, Brendan Reeves.

“I am really looking forward to this opportunity with N-Performance. I think it’s a great initiative and it’s great too see North Shore Sporting Car Club partnering with Hyundai to provide this opportunity for the youth of our sport, especially at such a great event,” Gill said.

“Also having Brendan there to give pointers across the night is something a lot of juniors, including myself, can benefit from.

“As well as that, the Hyundai i30N is not like anything I’ve driven before, so I’m really looking forward to learning a new car,” he said.

It’s going to be a busy summer season for Gill, as he will also be competing in the Australian round of the World Rally Championship.

“In November, myself and co-driver, Peter Harris, will be contesting Rally Australia. We’ll be entered in the Rally Australia Cup section of the event.

“This will be my first special stage rally and I am super exited to finally get out in the forest.

“Doing this as a first rally is something we have been talking about for near on a year now, as it falls just two weeks after my 16th birthday,” added Gill.

“This has been a real mammoth effort which is still ongoing as we prepare our car to national specification.

“We also had to be granted an exemption for me to be able to compete on a learner’s permit. Thankfully, after four months of ticking all of the boxes that the Confederation of Australian Motorsport (CAMS) required, we were finally granted the exemption.

“Peter and myself have been working extremely hard on our pace note system, using every Rally Sprint from the moment I was 14 to build a pace note system that I now have a lot of confidence in.

“Our only goal for the rally is to finish and gain as much experience and as many kilometres as we can.”

There is no doubt that Taylor has the right stuff to be successful in rallying and we look forward to seeing him perform at this season’s Whiteline Tarmac Rallysprint Series, and hope that the WRC event in Australia allows him to show his stuff on the world rally scene.

Video: Meeke reacts to end of stage questioning in Turkey