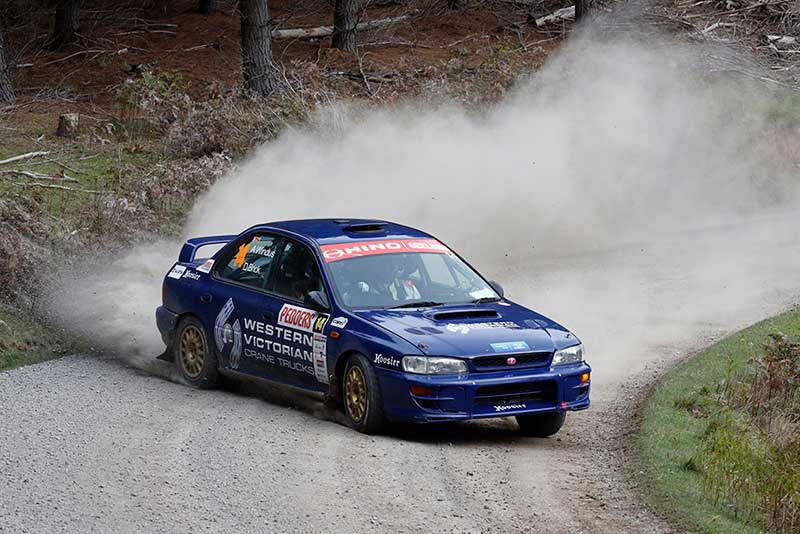 Ballarat’s Arron Windus heads into this weekend’s penultimate round of the Victorian Rally Championship with a handy 35 point series lead.

Windus and co-driver, Daniel Brick, took maximum points at the previous round, and are targeting another victory in Sunday’s Western Victorian Crane Trucks Yarra Valley Stages.

Windus will again be at the wheel of his Subaru Impreza WRX, with some changes to the car’s specification possible.

“We are using some new equipment from Modena Engineering,” Windus said.

“We will be testing a new rear differential on Friday which should suit myself and the car a bit better. Otherwise everything is the same approach as Eureka.”

While there is a slight chance that Windus and Brick could wrap up the Victorian Rally Championship with one round remaining, that’s not the priority for Sunday’s Yarra Glen based event.

“Championship wise, we do have a chance that the title could be wrapped up at Yarra Valley.

“Of course we need to win here, but you can never script this sport, so we will do everything that we can to secure a solid haul of points and see what happens around us,” Windus added.

While Arron has had a successful season to date, his father, Darren, has had a year to forget so far, with a string of non-finishers.

For the rally that is sponsored by their family business, Darren will drive a rented Subaru Impreza WRX.

“It’s a car owned by Michael Harding, and one that Arron used to win the Yarra Valley Stages last year,” Darren said.

“It’s a Production Rally Car spec Subaru that is not as fast as Arron’s car, but I’m looking for some reliability after a tough season.”

After a reconnaissance of the route on Saturday, the Western Victorian Crane Trucks Yarra Valley Stages will take place over 10 stages on Sunday.

A total competitive distance of 135km awaits the 71 car field, with cold and damp conditions expected.

For more details on the rally, head to www.vicrally.com.au