Delecour back rallying in a sports car

Back again on the rally which he won 24 years ago in a saloon car, Francois Delecour returned to Corsica in a sports car, this time in the retro lookalike Abarth 124.

Before the start he said: “For me the Abarth is a new challenge.  Last year I was here with a Porsche winning the R-GT championship.  Porsche was absolutely fantastic, it was a dream to drive.

“Now the page is turned and I had the opportunity this year to drive the Abarth in Monte Carlo.  There we were not competitive because these cars are only two-wheel-drive, the conditions were absolutely terrible and we retired because of a problem with the diff.

“The Abarth car is interesting because it is not only two-wheel-drive, but is very very light car.  It is basically under 1100 kilos.  We have a modern six-speed gearbox like R5, the same philosophy, the same power.

“In addition to Porsche I have driven rear-drive cars before, in 1988 with a BMW M3.  I finished third in Antibes Rally, third in Rallye du Var, I was leading Cevennes in front of Didier Auriol and everybody when we broke the diff. 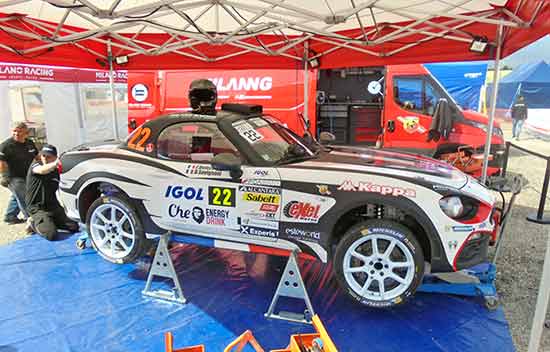 “The Abarth is fun.  Except for the spirit of the car it does not feel like a retro car at all.  It is a very efficient car, competitive car, very light with sequential gearshift on the steering wheel, big Brembo brakes, good 1.8 litre turbo with more than 320hp, an interesting car.

“Compared with the old BMW it has much more torque with the Abarth, bang-bang ALS system.  It is a very, very modern car, and Milano Racing has made a lot of development work since Monte Carlo, because Monte Carlo was the first rally.

“As we saw in Monte Carlo we were not ridiculous compared with some R5s.  We were lying 19th overall before our problem, despite the conditions!”