Dunedin’s Stadium Cars Otago Classic Rally has come up with another coup, securing 1994 World Rally Champion, Didier Auriol, for the May 10 and 11 event.

Didier Auriol (right) and co-driver Denis Giraudet.The Frenchman will be co-driven by the experienced Denis Giraudet, and will drive a Ford Escort RS1800 built and run by Brent Rawstron’s Rossendale Wines Rally Team. 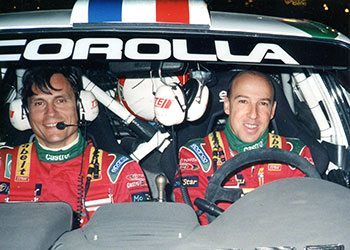 Didier Auriol and Denis Giraudet will contest the Otago Classic Rally.“New Zealand was, and still is, the favourite gravel event for WRC drivers and I can imagine that the South Island is offering the same kind of fantastic roads we were used to in Auckland,” Auriol said from France.

“I’m looking forward to the challenge of driving in a very competitive event and meeting the local drivers.”

The 55-year old is a former factory driver for Lancia, Toyota and Peugeot, a six-time winner of the Tour de Corse WRC round, and finished second on Rally New Zealand in 1995 and 1998.

Although Bernard Occelli sat beside Auriol for 16 of his WRC wins, it will be his most recent co-driver, Denis Giraudet, who will call the pace notes on the Stadium Cars Otago Classic Rally.

Didier Auriol, 1994 Rally Australia“We’re both very much looking forward to competing in New Zealand as the Otago Rally, its hospitality, and Brent Rawstron’s team are well known amongst many top competitors in Europe,” Giraudet said.

Otago Rally spokesman, Roger Oakley, said that the event was thrilled to be bringing another World Rally Champion to Dunedin, and expects Auriol to be competitive against the best classic rally drivers from New Zealand and Australia.

“Having Auriol compete here in our event is extremely exciting – he brings a fantastic profile to our event and our region,” Oakley said.

“I know the Australasian drivers will give him a real run for his money, and it is all going to provide spectacular viewing for the fans.” 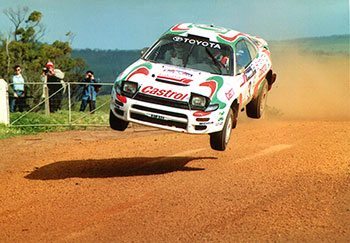 Didier Auriol at Muresk in the 1994 Rally Australia.The rally will start from Dunedin's Octagon on Friday evening, May 9. After two days of intense competition, the historic Dunedin Railway Station will host the finish celebrations on Sunday afternoon.

Before then, however, competitors will tackle 14 competitive stages to the south of Dunedin, with 280 kilometres of competitive driving over the two days.

Entries are already flowing in for the rally, with strong interest from several leading competitors in the Classic Rally, all of whom have demonstrated the ability to win the event.

The event is also the second round of the New Zealand Rally Championship, with drivers including previous champion, Richard Mason, expected to compete.