There is nothing like competing in your home rally, especially when you are debuting your radical home-built Suzuki, which is sporting some exciting new componentry.

Come the weekend (May 10 – 11) and this is exactly what Dunedin’s Emma Gilmour will be doing as the 15-stage, 280km Drivesouth Rally of Otago begins on the roads around her town.

Her Suzuki Swift Maxi has had a transmission upgrade a little earlier than was originally scheduled in its development plan. When her gearstick broke in last month's Rally of Whangarei, Emma realised "we need to bite the bullet and get a sequential gearbox".

Her Perth-based engineer Lane Heenan was able to organise for her to lease one for the rest of the season, which was kinder on the budget, she says. 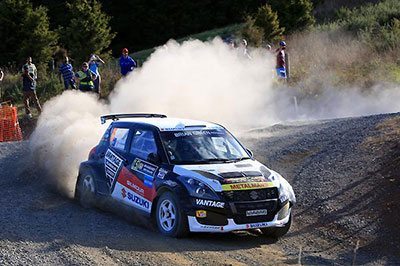 The quick-changing flat-shift nature of the sequential gearbox will make a big difference to her Suzuki which has a "really revvy engine" and does its best work up over 5500rpm.

“With the old H-pattern gearbox, it dropped down below the ideal rpms but the sequential basically keeps it in the right power curve," Emma says.

Lane will be over from Australia working with Emma’s Suzuki this week before the event to tune in the new gearbox and adjust its set-up.

"Because we are still developing the car, every chance he gets to tune it, he is able to tune it that much better," Emma explains.

Her Australian co-driver Ben Atkinson will be making his first appearance at the Otago event. He began the New Zealand Rally Championship (NZRC) season with Emma last month at the VINZ International Rally of Whangarei, where he demonstrated a “super cool attitude” when things went pear-shaped, Emma says. He took the boost hose issues, broken gear stick and two flat tyres in his stride.

"I really enjoyed working with Ben. Nothing was ever a problem. It's nice having a calming influence inside the car when I'm starting to get frustrated," she says.

Although Ben has only visited Dunedin once before many years ago, not knowing the rally roads is not a competitive disadvantage as the 2014 event contains a number of new and mostly new stages.

“I can't wait for my home event. With over 50% of brand new stages it is going to make it a real challenge,” Emma says.

The Drivesouth Rally of Otago also features two, monster 40km-plus stages, which will provide a new challenge for what is Emma's 11th time driving in her favoured local event.

"I love the Otago Rally. The town always really gets behind it and it's nice competing in front of a home crowd."

She joins a 43-car field for round two of the Brian Green Property Group New Zealand Rally Championship and Allcomers component. There are also 44 cars entered in the Stadium Cars / Ssangyong Classic Rally of Otago, with all eyes on France’s Didier Auriol in a Ford Escort RS1800 and WRC driver Hayden Paddon in a Ford Escort BDA.

The rally will start from Dunedin's Octagon on Friday evening, May 9. After two days of intense competition, the Dunedin Railway Station will host the finish celebrations on Sunday afternoon.