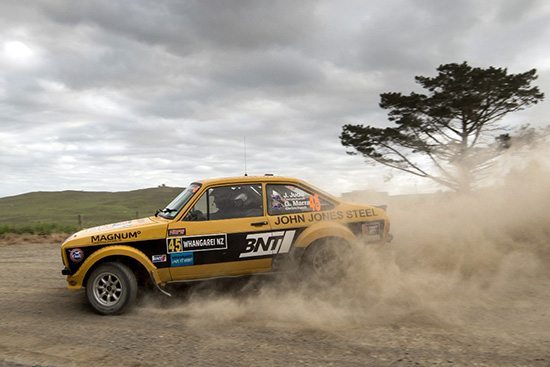 The countdown has begun for the sixth New Zealand Silver Fern Rally which starts in Christchurch on Monday (November 28).

While the Kaikoura earthquake had some overseas entrants contacting the new event organiser about the state of the roads, Ultimate Rally Group CEO and spokesperson Peter Martin says that no part of the route – which runs from Christchurch in the north to Wyndham (near Gore) in the south – has been directly affected.

“There were obviously a few issues early on around getting cars from the North Island across Cook Strait and to Christchurch but they were resolved quickly and it has been all systems go since then,” he said this week.

The first of the new-generation Silver Fern Rally events was organised to celebrate New Zealand’s original Silver Fern Rally held in 1969. Since then the new-era event has grown in stature and is now recognised as one of the pre-eminent long distance marathon-type events in the world.

This year’s has attracted a 45-strong entry including a number of well-known names from New Zealand and overseas.

Over the seven – Monday Nov 28 to Sunday Dec 04 – days this year’s event runs competitors will complete 1056.02 km of closed mostly gravel special stages and over 1,700 km of travelling in-between.

Start point of Monday morning is Addington Raceway in Christchurch with first car away at 7.30am. The first special stages are situated west of Temuka with service stops at Fairlie and Kurow and the first overnight stop at Oamaru.

On Tuesday the route takes competitors into North Otago and the Maniototo before an overnight stop at the Forsyth Barr Stadium in Dunedin.

Wednesday sees the field heading into South Otago and Southland before a second overnight stop in Dunedin.

On Thursday the route takes competitors into West Otago and Eastern Southland with an overnight stop in Gore. On Friday it is on into the Catlins before the return north to Dunedin where a super stage will be held inside the Forsyth Barr Stadium on the tarmac surface laid for the D1NZ National Drifting series event being held there on that day and the next.

First car away on Saturday morning from Dunedin is at 8.15am with the route north via Karitane, Herbert, Oamaru and Waimate before ending the day at Timaru’s Caroline Bay.

On Sunday morning competitors then head west for stages near Pleasant Point and Geraldine and the north for a service at Methven and final stages near Darfield before a return to the finish back at Christchurch’s Addington Park Raceway.

For more information including itinerary and detailed stage descriptions and maps go to the event website www.silverfernrally.co.nz