What a rally! There were a record-equalling 11 different stage winners, two WRC drivers (Ott Tanak and Hayden Paddon) and a JWRC challenger (Emil Bergkvist) all crashed out when leading; there was a change in overall leader after all of the first seven stages; there were zero points for the championship leader Ogier, but there were two podium places for M-Sport, including a first podium for Teemu Suninen. It was the first win in Portugal for the new WRC leader, Hyundai’s Thierry Neuville; the first day was a disaster for Toyota, later partially averted by Lappi, and another disaster for Citroen. The two support championship categories were won by Pontus Tidemand (WRC2) and Dennis Radstrom (in the very closely fought JWRC), both Swedish drivers. The WRC’s European gravel road season had started in style ... 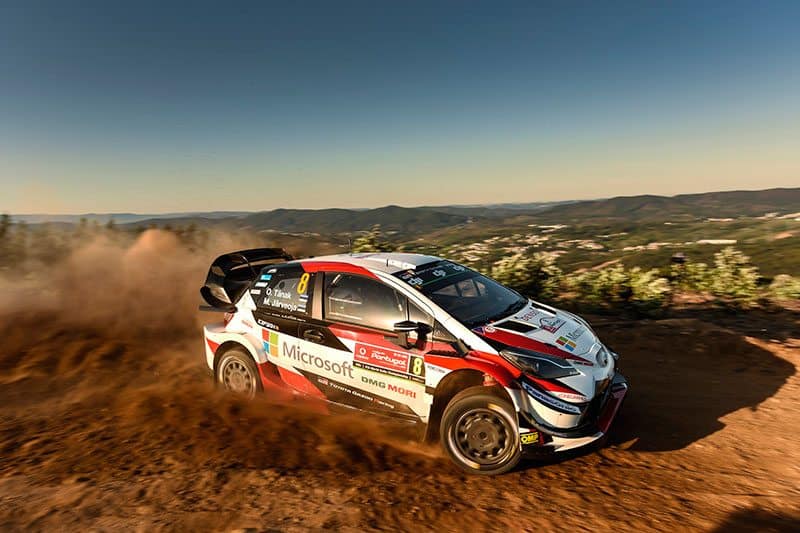 Back to the classics Finally we had a straightforward classic rally, with essentially an unchanged route based in Porto, which was noted for its toughness, especially in the opening leg in the far north of the country, and all the more for the remarkable enthusiasm of the fans. The entry was only marginally smaller than that at the Tour de Corse, with Hyundai unusually making a four-car entry (to equalise the championship points scoring opportunities of their two part time drivers Sordo and Paddon), while Citroen bought Mads Ostberg into the team for the next two events. Three days of excitement seemed assured, it was almost too good to be true. And so it was. 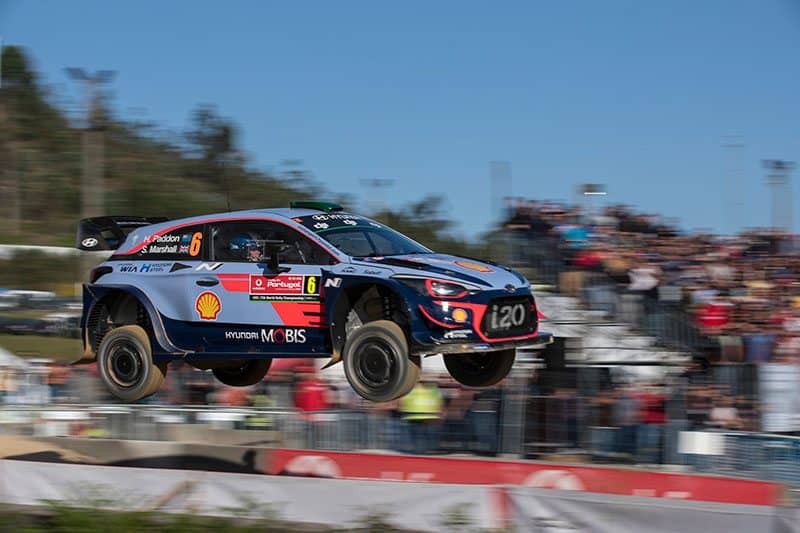 Drama from the outset The Thursday opening super special at Lousada had brought out the spectating masses, but on the very first stage on the Friday the initial leader was missing. Ott Tanak was out with an engine problem in his Toyota caused by a rock lying loose on the road, which caused irreparable damage. Fastest on the fast-clearing gravel stage was Hyundai’s Hayden Paddon who snatched the lead, while one unusually happy driver was Citroen’s Kris Meeke: “This is the first time I feel at home in a C3 WRC.” Meeke moved into the lead on stage 3, while other drivers conserved their tyres for the long stage 4, but Tanak’s teammate, Jari-Matti Latvala, came to a halt with front suspension failure caused by impacting on a rock. Second Toyota gone. All this allowed Dani Sordo to move ahead. The afternoon saw firstly a repeat of the morning’s stages following by two downtown stages in quick succession in Porto itself. 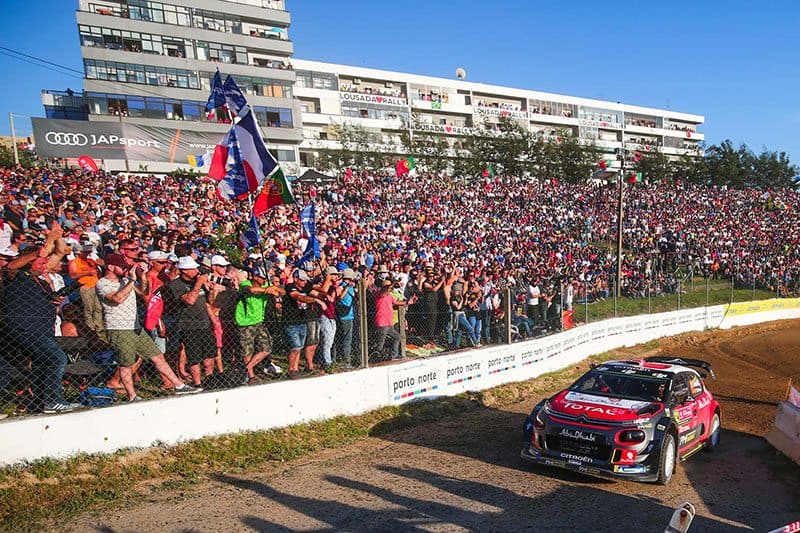 Friday afternoon saw the dramatic retirement of Sebastien Ogier who broke his suspension while cutting a corner and the car slid off the road on the next bend. As crews agonised over tyre choices for the now much rougher and more abrasive stages, things went badly wrong for Hyundai, whose cars were all in the top six. Meeke regained the lead on stage five, but Paddon took it back again on stage six when Meeke punctured, the whole destroyed tyre flying away as he finished the stage on the rim. Then came the second run of the long Ponte de Lima stage and disaster this time for Hyundai. Firstly Andreas Mikkelsen came to a stop with no engine oil pressure, and then Paddon slid off the road at high speed into a ditch, the car’s progress abruptly stopped by a culvert. The damaged car blocked the stage. Paddon was evacuated and spent the night in hospital. 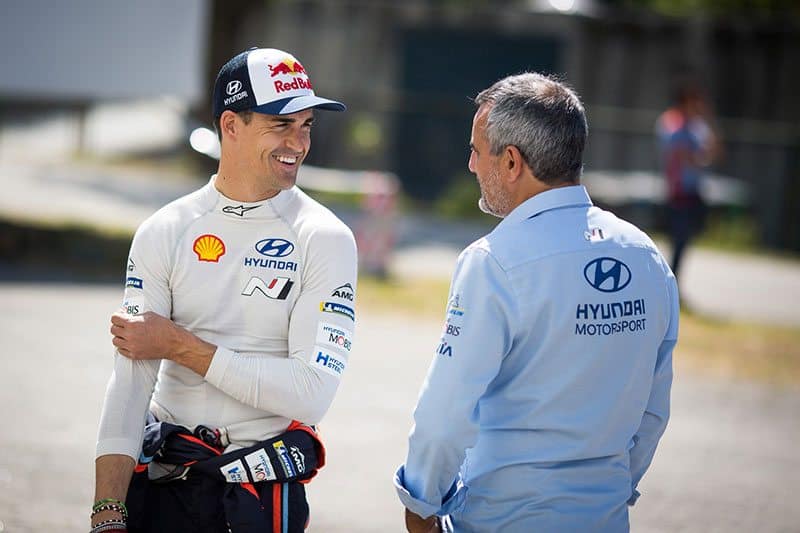 Before this happened Meeke had passed and finished the stage with a delaminated tyre – and no second spare wheel. He had a 100 kilometre road section and then two super specials to go before reaching service. He drove carefully back on the delaminated tyre and refitted the tyre-less wheel rim for the stages, losing a minute and dropping from third to seventh, before refitting the delaminated tyre to drive legally on the public road to service. That was imaginative thinking in respected rally tradition! 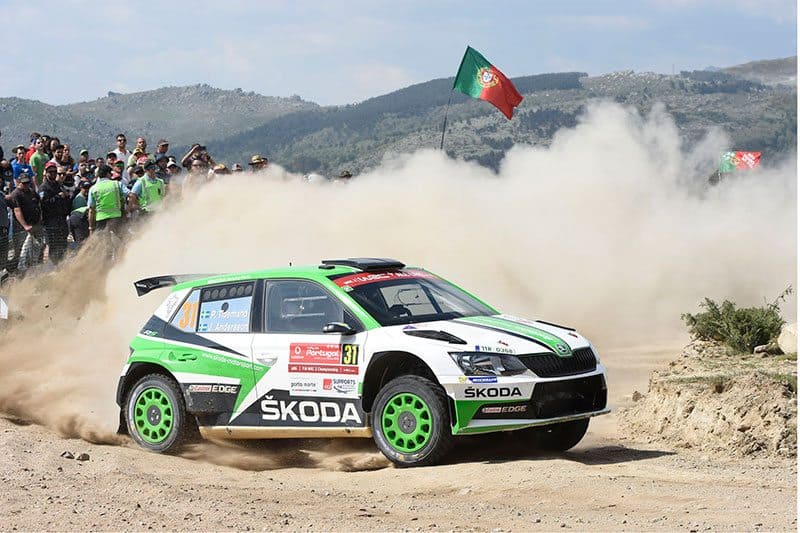 On the third stage of Day two that respect evaporated when Meeke, under no pressure, crashed heavily into trees and was also evacuated to hospital. When Paddon crashed, Neuville had taken the lead and he held this to the end of the event. Penalties all round No sooner had the FIA’s Court of Appeal given its judgment on Ogier’s chicane performance in Mexico than drivers started hitting chicanes in Porto on the Friday night, with Sordo and Lappi being seen live on FIA TV bouncing and moving bollards and bales. Which, as the rally progressed into Sunday, led to Sordo having a 10 second penalty to cover all the incidents, which ultimately cost him a place overall. Meeke apart, Saturday was a much calmer day. Elfyn Evans (memories of his luckless Argentina Rally long gone!) had implanted himself in second place and in third place was his teammate Suninen. Behind them Lappi was driving hard to bring some honour to Toyota and defended his position against Sordo and Ostberg. 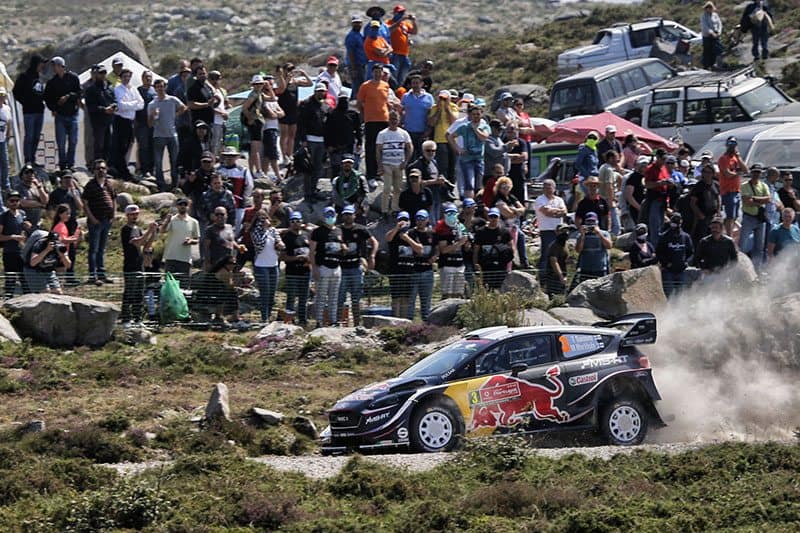 As the rally came towards the final day the interest focussed on the Power Stage possibilities. Even on the second passage through the Fafe stage, latter runners still had clearer roads - to the consternation of Ogier, who hoped for some points to take home, but it didn’t happen and he went home without officially finishing the rally. Fastest over the famous Fafe was to be Lappi followed by Neuville and Sordo. Overall the order ran Neuville, Evans, Suninen, Lappi, Sordo, but then the Stewards met again. Nearly 48 hours after the incident, Lappi was also penalised 10 seconds, finishing behind Sordo. 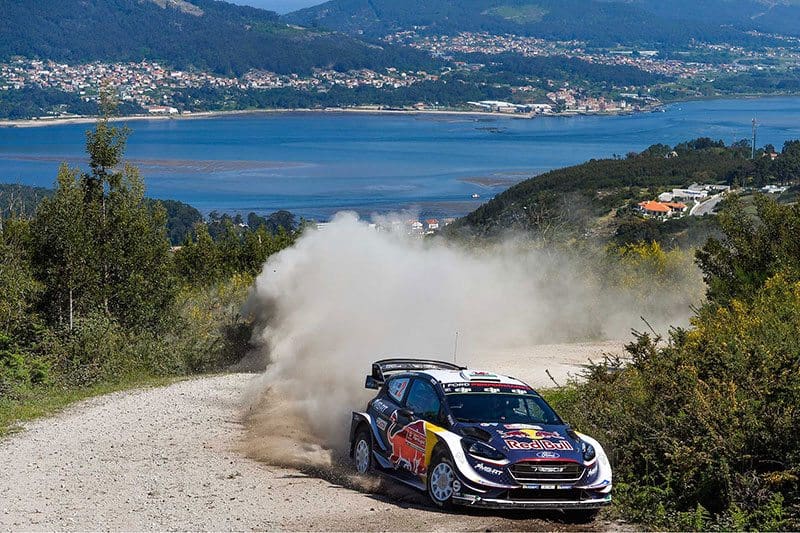 In WRC2 Citroen had high hopes for their C3 R5 driver Stephan Lefebvre, but he again had brake troubles. After leading for eight stages he finished only third, behind Pontus Tidemand and fellow private Printsport Skoda driver Lukasz Pieniazek from Poland, whose second place was easily a career best performance. Tidemand made a slow start, immediately losing time with a puncture, and when Lefebvre lost the lead with a puncture the attention swung on to the British driver Gus Greensmith. His Fiesta R5 was run by M-Sport, and he led the category for much of Friday before he had to stop and change a flat tyre. Pierre Louis Loubet finished fourth, and after a consistent run fifth in WRC2 was the Japanese driver Hiroki Arai. If it had not been for the Junior WRC there would not have been any entries in WRC3, but there was good Junior support with 14 starters. 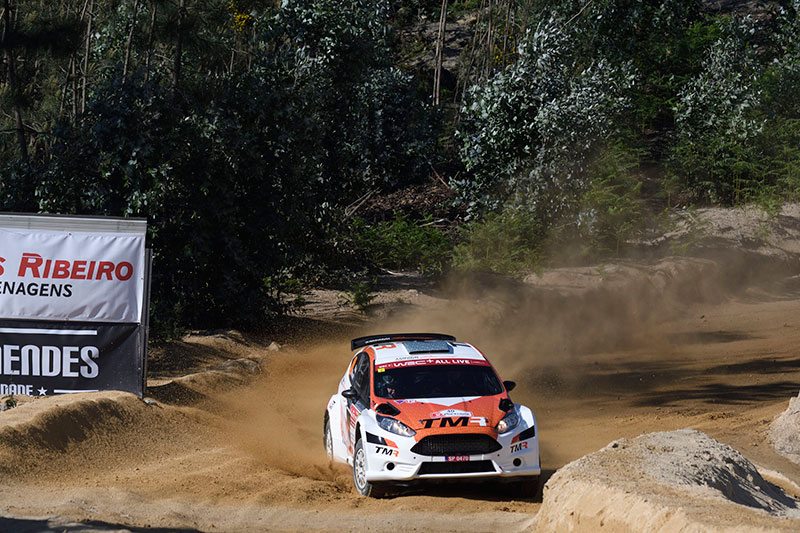 This category saw a fierce battle for the lead, but then came a series of broken driveshafts, which each time caused the drivers to stop for the day. Dennis Radstrom finished almost a quarter hour ahead of the Italian Enrico Oldrati, while New Zealander David Holder came third, despite missing a stage. Championship leaders In the championship standings Hyundai now led both the Manufacturers’ and the Drivers’ series. Their lead in the Manufacturers’ over M-Sport was reduced by two points, while in the Drivers’ series Thierry Neuville leads Sebastien Ogier by 19 points. 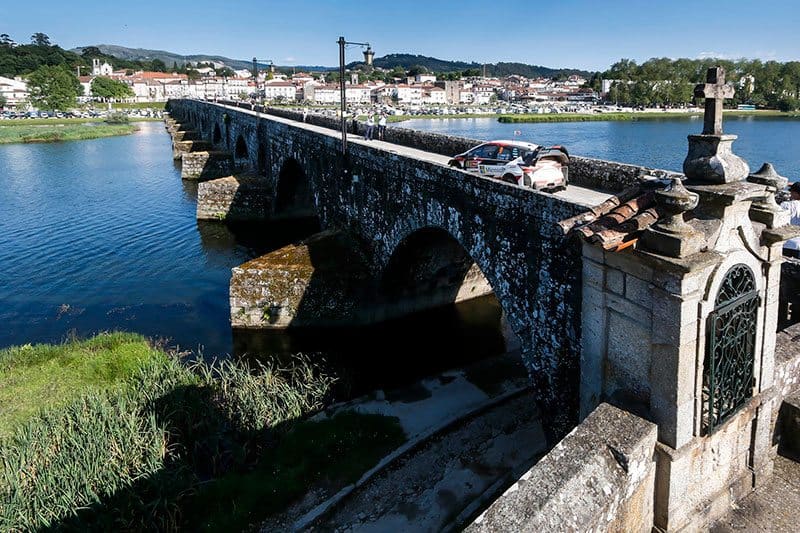 Esapekka Lappi was the only Toyota Yaris driver to finish the event. Photo: Martin Holmes Rallying

In WRC2 Tidemand continues to lead (his absent Skoda teammate) Jan Kopecky, now by 43 points, and in the Junior series Dennis Radstrom’s lead had increased to 18 points, now ahead of Emil Bergkvist. In the WRC3 series Radstrom has a clear lead of 19 points over Bergkvist. 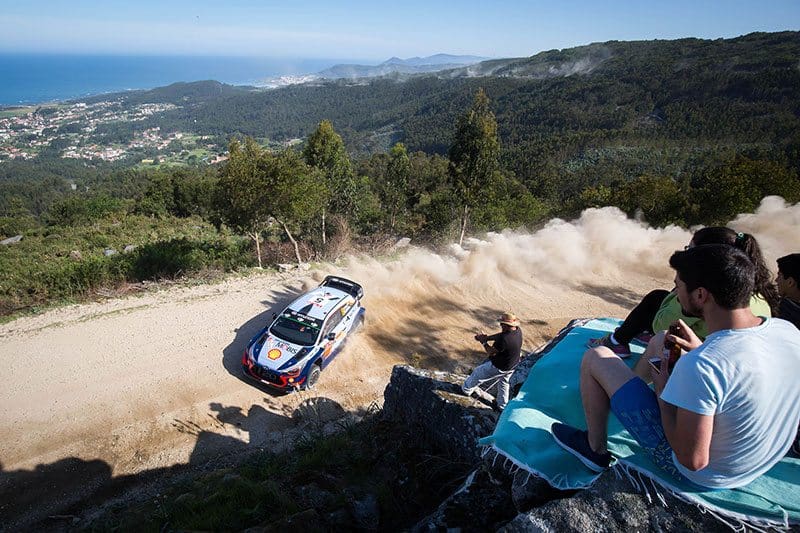 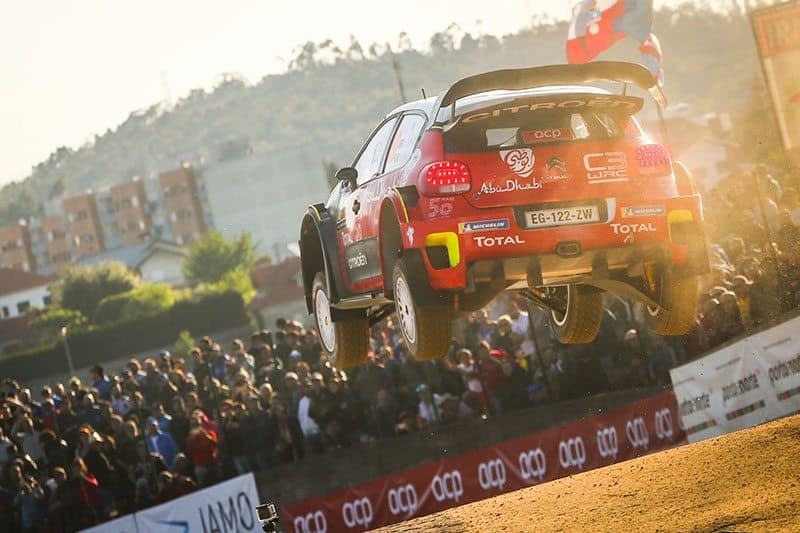 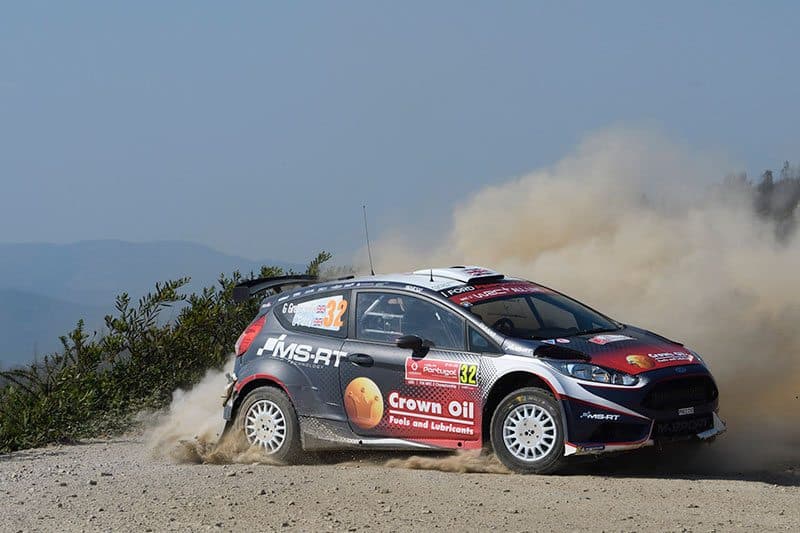 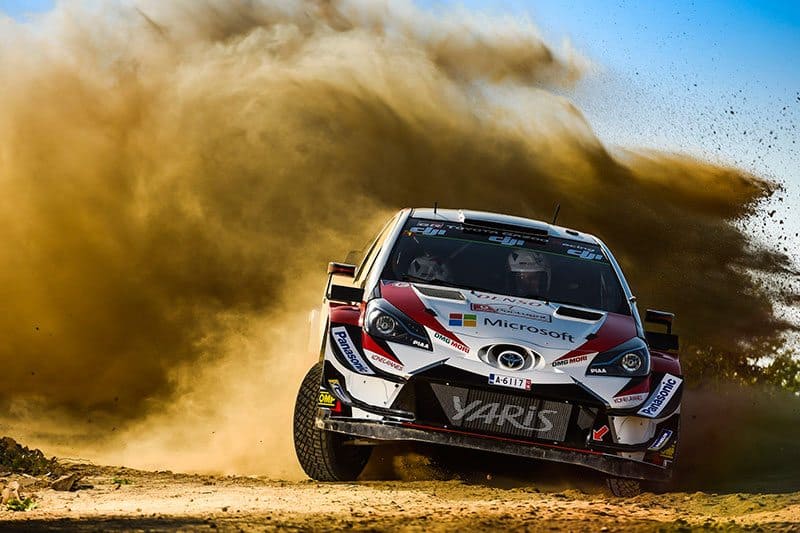