The Finns are back!  For half the Neste Rally Finland, Finnish drivers dominated the event.  The event was finally won by the 26 year old Toyota driver, Esapekka Lappi, gaining his first WRC victory, after his teammate Jari-Matti Latvala lost the lead through electrical trouble six stages from the end.

The Welsh DMack Fiesta driver, Elfyn Evans, then on the final day passed both the Fiesta of 23 year old Teemu Suninen and then the Toyota of Juho Hanninen to finish in a remarkable second place.

For a while the locally prepared Toyotas, fitted with newly developed engines aimed at improving driveability, held the top three places and eventually finished first and third.  It was only the fourth rally for Lappi in a World Rally Car and the second for Suninen. 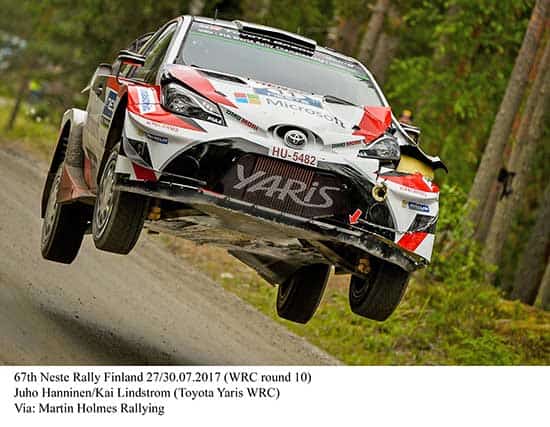 Despite an unusually disappointing performance by his Hyundai team, sixth placed Thierry Neuville is now equal in the lead of the World Drivers’ Championship with Sebastien Ogier, who suffered two heavy crashes in Finland (testing and on day one) and had to retire from the event.

Once again the top Citroen driver was Craig Breen, scoring fifth place for the fifth time this season.  M-Sport’s lead in the Manufacturers’ series has increased from 22 to 34 points.

The World Champion Sebastien Ogier had a week he wished had never happened.  The weekend before the rally he heavily crashed in M-Sport’s 2017 test car, ironically by impacting a rock in the test road, which his car had dislodged minutes earlier, preventing teammate Elfyn Evans from testing.

Then on the first full day of the rally he slid off the road at speed into a tree, concussing co-driver Julian Ingrassia.  Worrying enough, but happily it could have been worse, as his championship rival Thierry Neuville had a shocking event, struggling even to finish sixth overall, which left Ogier and Neuville tying on points in the Drivers’ championship.

By Sunday evening the M-Sport team enjoyed the superb result of Evans, saving the team from complete disaster after Tanak lost time on the Friday and only finished seventh.  It was like the titles took a holiday in Finland with attention focussed during the event instead on the race between the Finnish drivers and the performance of the Toyotas.

With the accident for Ogier and Tanak’s time consuming puncture on the first full day, the event started badly for them, but Evans gradually improved over the last two days, eventually finishing the best Ford driver. 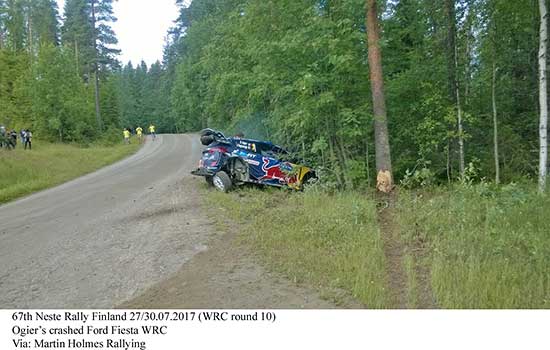 During Friday the private Ford of Mads Ostberg climbed up to third place before he suffered various problems, and then for a long time the top Ford driver was Teemu Suninen.

On the penultimate stage of the rally Suninen had an extremely lucky escape when he went off the road.  He told the team he had spun, but film footage showed that the car spun while it was in the air…

Ogier hopes that Ingrassia will be back in full form in three weeks time for the championship critical asphalt Rallye Deutschland.

The biggest surprise in Finland was the poor performance of the Hyundais, which created an air of depression for their crews.  Sometimes Neuville found the car was working well, but not often.

The team were already depressed by the misfortunes of Paddon, who twice had broken suspension and their third driver, Dani Sordo, who never scored a stage time better than eighth.

Kris Meeke was again the topic of conversation at Citroen Racing, eventually he finished eighth overall.  Keeping out of the debate and doing a solid job in difficult circumstances once again was Craig Breen, while on this occasion the team’s third car was entrusted to the team’s patron Sheikh Khalid Al Qassimi, who confirmed the difficulties of the C3 WRC car. 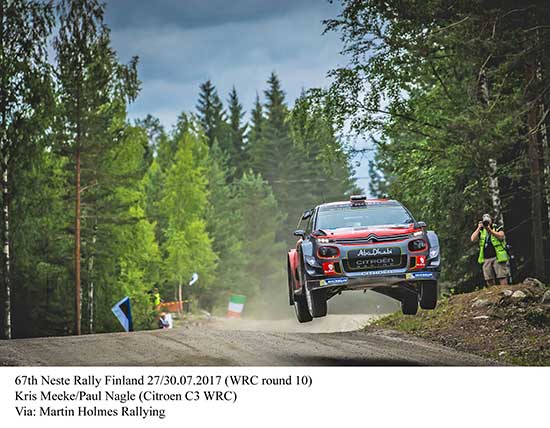 When the stage times were counted up, Toyota scored 19 fastest or shared fastest times against seven for the various Ford drivers, one for Hyundai and none for Citroen.

Before the event there were many concerns about the speeds obtained by the new breed of World Rally Cars on what was already the fastest rally in the championship.

The FIA had already stamped their authority by demanding a particularly fast stage be cancelled on the WRC round in Sweden, and the Finnish organisers reacted by introducing chicanes on stages, usually by way of requiring cars make a detour around a triangular road junction. 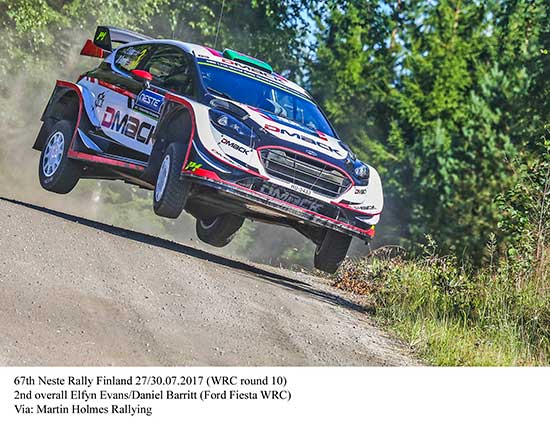 Drivers were largely adamant that this was an unnecessary move and could even increase danger.  It looked like a sop but the organisers went ahead, and the result was the winning average speed this year was virtually identical with the winning speed last year.  The debate continues.

Another curiosity of the event was the very small entry, the smallest for this very popular event since WRC records started nearly 50 years ago.  There was no clear reason for this, and certainly the event was as competitive as it has ever been.

In the WRC2 category this was another specially poor entry, but this was a consequence of new rules requiring certain events, notably not this one, had to be entered on a mandatory basis. This meant that all the top running WRC2 drivers either stayed away or entered the event on a non-points scoring basis. 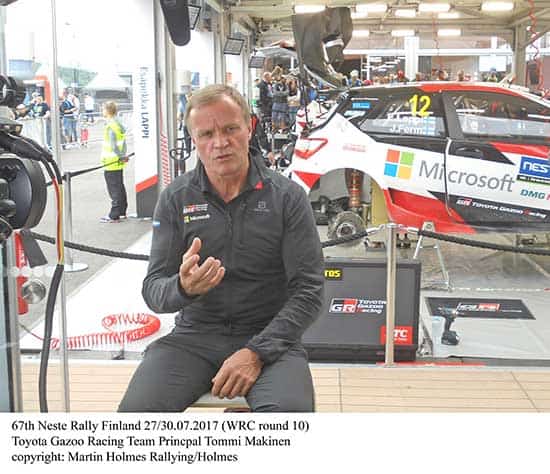 It was a good chance for new names to shine. Jari Huttunen, a past winner of the organisers’ Future Star sponsorship, won easily ahead of French driver Quentin Gilbert, ahead of two more Welsh drivers, Tom Cave and Osian Pryce.

Nicolas Ciamin won the Junior/WRC3 championship categories, but there was a crazy last morning scene when several of the crews rolled, though most were able to carry on with surprisingly little time loss.

There were no changes in the top places in WRC2 championship, while Solans retained his leads in both the WRC3 and Junior series, now ahead of Ciamin in both.

Finland produced new names appearing, heartbreak drama like when Jari-Matti Latvala stopped for no fault of his own, uncertainty on the Friday created by the weather, which meant the championship running order that day was a handicapped for Latvala, and an advantage for Lappi and an intense fight for position on the final morning.

The 2017 event had all the excitement traditionally expected from the Finland round. 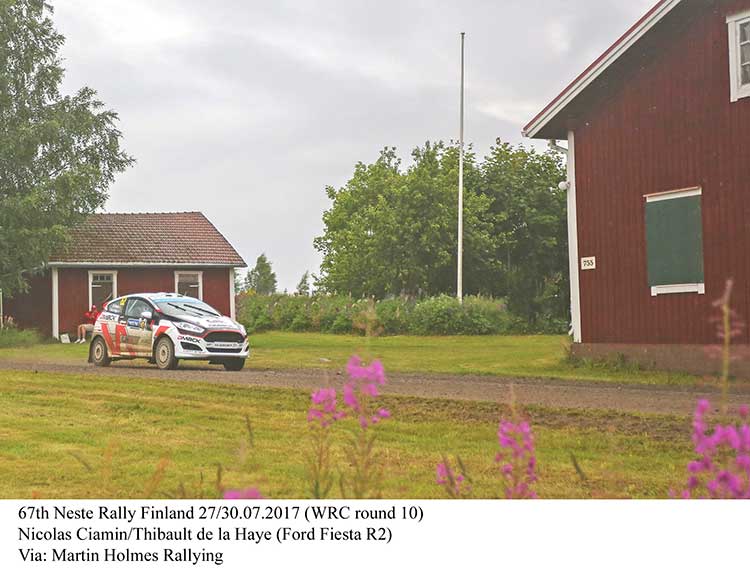