This year’s high-speed edition of Rally Finland did not pan out as Hayden Paddon and co-driver Sebastian Marshall hoped, with the Hyundai Motorsport pair dogged by misfortune.

On the positive side, they demonstrated front-running pace and displayed the sort of never-give-up attitude needed to succeed at the top of world rallying.

Fourth quickest in SS3 by only 0.6 seconds to stage winner Jari-Matti Latvala, Paddon and Marshall were just 1.1 seconds off the lead of the rally going into SS4. But the smallest of errors, they ran wide and hit a rock. The resulting rear-right suspension damage forced them to end the day early. 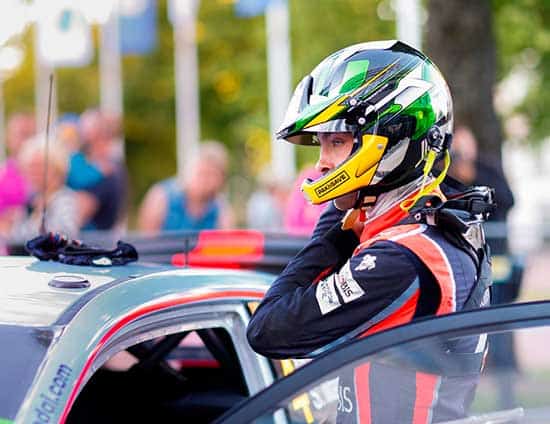 Paddon said: “It wasn’t the start for the rally we were looking for, but we went out this morning wanting to push and be up the front and we were able to do that for the first couple of stages, being competitive with the local drivers and fighting for a podium.

“Unfortunately, we ran just a little bit wide on a fast left hander and hit a rock that was in a ditch. This caused too much damage to the suspension to allow us to continue. I think we were a little bit unfortunate to pick up the damage we did, continuation of the bad luck we’ve had this year.

“Nevertheless we know the speed was there, the car’s been easily able to be repaired and we’ll be able to re-join for tomorrow, to go back out there and try and set some competitive times, build and develop for the future. It’s certainly not a loss. There’s a lot of rallying left yet and we’ve just got to stay positive and keep pushing forward.”

Returning under Rally 2 regulations on Saturday with a fully repaired Hyundai i20 WRC Coupe, Paddon and Marshall were again straight into a front-running pace with the fifth-quickest time on the day’s opening 14.85km stage. Then there was a large rock, about 7km into SS15.

Paddon said: “There was nothing we could do about our retirement today. We were going through a blind left, into a right, when all of a sudden, I caught sight of a big football-sized rock in the road. In the split-second it took to see it, and I knew it would do damage. We could not avoid it and it broke the suspension arm. The real shame is the lack of mileage from this rally. We will be back out on Sunday to try and end this weekend on a high note.”

With just four stages on Sunday to wrap up the rally, the pair again demonstrated the top-five pace they would have liked to have shown all weekend, racing through the first three stages amongst the front-runners. They did finish the final stage, the power stage, but in 12th place after a mechanical issue, then retired from the event.

Paddon said: “It has been one of those weekends for us. After our retirements on Friday and Saturday, we wanted to approach these final stages in a positive manner and to get some time behind the wheel. This rally has perfectly illustrated our season, where anything that can go wrong does go wrong.

“The power stage was another example, when the car unexpectedly went straight on at a third gear corner. Still, we got to the end of the rally and I am sure, one day in the future, we will look back and laugh at our bad luck this year. I am sure we could have fought for the podium this weekend, and that is the positive that we will take away.”

On his popular Facebook page, Paddon added: “On a positive note, we have been competitive and will never give up as we work towards 2018. I have never had a season like this before which is character building and will only make us stronger for the future.”

Overall, it was a disappointing weekend for Hyundai Motorsport with no crews on the podium. Thierry Neuville finished in sixth place, picking up eight points, and by scoring three extra power stage points, Neuville has equalled Sebastien Ogier on points to co-lead the WRC drivers’ championship. Dani Sordo finished in ninth.

Paddon and Marshall return to WRC action in mid-August for Rally Deutschland, the first of two tarmac rallies.