Jyvaskyla’s shrinking Service Park.  Ongoing construction work at the Paviljonki centre in Jyvaskyla will soon force a strict limit on the number of competitors on Finland’s WRC rally.

Just to rub in the problem, the construction erected a giant placard showing the work still to be done!

The total number of competitor on this year’s Neste Rally was the lowest ever for this WRC event. While the WRC teams were housed outdoors, private teams were again housed indoors in the Paviljonki exhibit halls where there was still enough room.

Nicolas Ciamin is closing on the Junior World Championship leader Nil Solans and is now just 26 points behind.

Solans dropped well back after an early visit off the road and finished second behind Ciamin. Retirements included Terry Folb with engine failure and the organiser’s Future Star scholar, Emil Lindholm, who crashed on the final morning.

Predictably the experienced rally car jumping specialist Mads Ostberg was recorded with the longest jump of the event, at the “Yellow House” jump in Ouninpohja stage, with a leap of 50 metres.

As for speed, fans recorded interesting information about terminal velocities at the rally.

The Fords and the Toyotas regularly achieved between 195 and 200kh/h, the Hyundais and the Citroens 195 and lower. 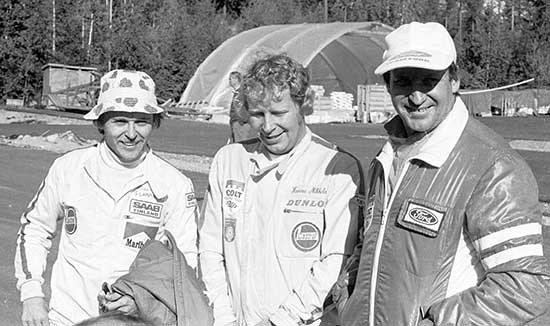 Elfyn Evans, however, crashed the Finnish party hoping to celebrate the resurgence if their nation’s rally successes.

Three stages from the end of Neste Rally Finland the Welsh DMack M-Sport driver broke into the 1-2-3 Finnish stranglehold of the event, which they had held after Norwegian Mads Ostberg dropped back with differential trouble in the rain of Friday afternoon.

Finnish fans will now have to wait still longer for another moment of national rallying pride.  The last time that Finnish drivers had actually finished a World Rally with a 1-2-3 result was New Zealand in 2002, and the last time they had achieved this on home ground was in 1986.

Pay attention to that man Lappi, he has a keen eye on what is going on.

He noted that last year’s podium in WRC2 in Finland comprised Lappi, Suninen and Evans in that order.  Two stages from the end of this year’s result, that was exactly the order of the top three overall positions of the event!