For a rally fan, Prodrive is one of the most famous motorsport operations in the world, having taken Subaru to the top of the WRC in the 1990s and 2000s. Earlier this year I had the opportunity to visit the Banbury based operation north of London, hooking onto a guided tour of the massive facility and getting a close look at many of the company’s most famous cars. At the time, pre COVID-19, the factory was full of Aston Martin race cars being prepared for the season ahead, with a couple of Subaru rally cars being rebuilt throughout the workshop. It’s hard to believe that just a few weeks later, the factory was in lockdown mode, like the rest of the UK. Yet, like many other motorsport businesses, they ‘reinvented’ themselves for the cause, enabling their hundreds of staff to keep working. Within five weeks, Prodrive had taken the Ovsi Ventilator from a concept to a fully working pre-production prototype, tested to UK Government specifications. It will soon go into production in South Africa for use across the continent. 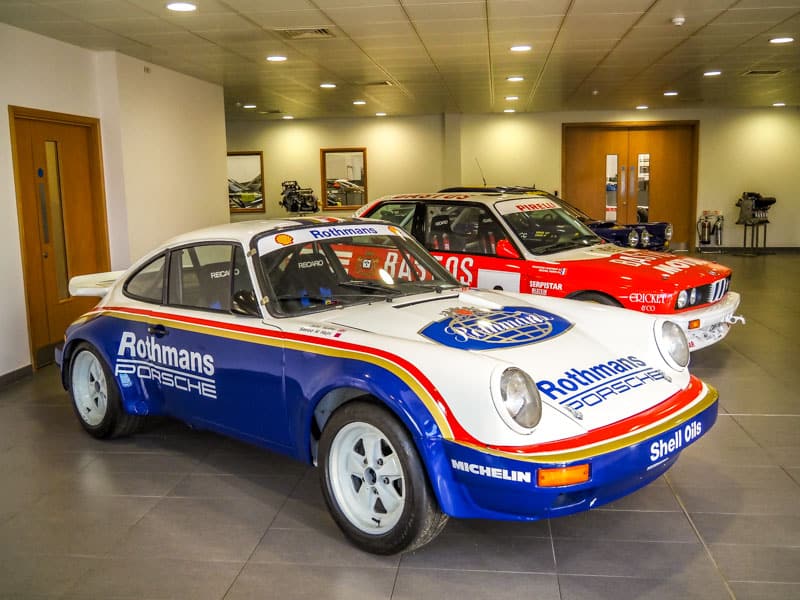 The foyer at Prodrive in Banbury whets your appetite for what's to come. Photos: Peter Whitten

Back to the tour though, and rally cars in the build process were a little thin on the ground during my visit, thanks to Prodrive’s core business having moved to circuit racing, but there was still plenty to see. Right from when you walk in the front door at Prodrive you can see that this is a company built on, and proud of, their rally heritage. Greeting you is a Rothmans Porsche 911, a Bastos BMW M3 and, if you haven’t slipped on your own drool by now, a 555 Subaru Impreza bearing the names McRae and Ringer. 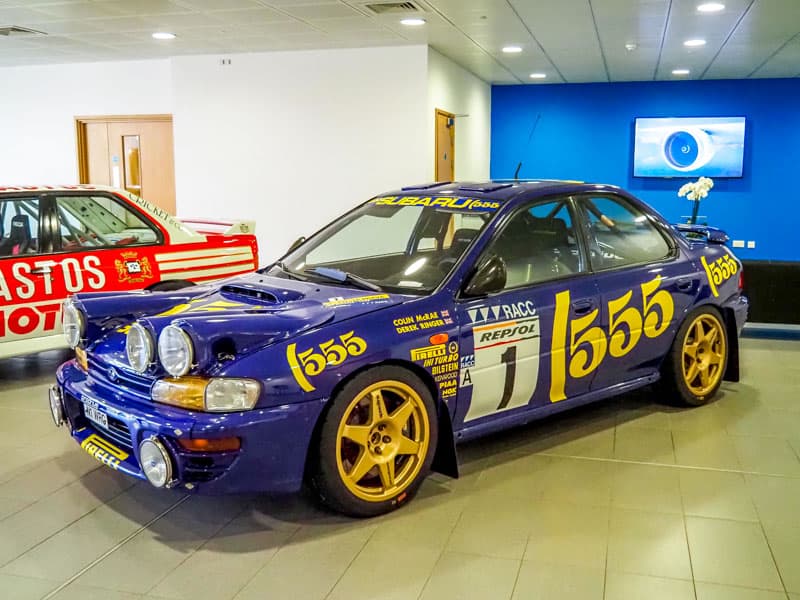 Subaru rally fans will go weak at the knees seeing this McRae 555 Impreza in the flesh.

As you’d expect, the cars are in concourse condition, and each tell a story of Prodrive’s beginnings. Unfortunately, there’s no signage to give you any of the cars’ history or credentials, but most who venture through the front doors will have a fair idea on their past successes. It was through the locked doors that the tour continued, and where even more Prodrive history was on display. 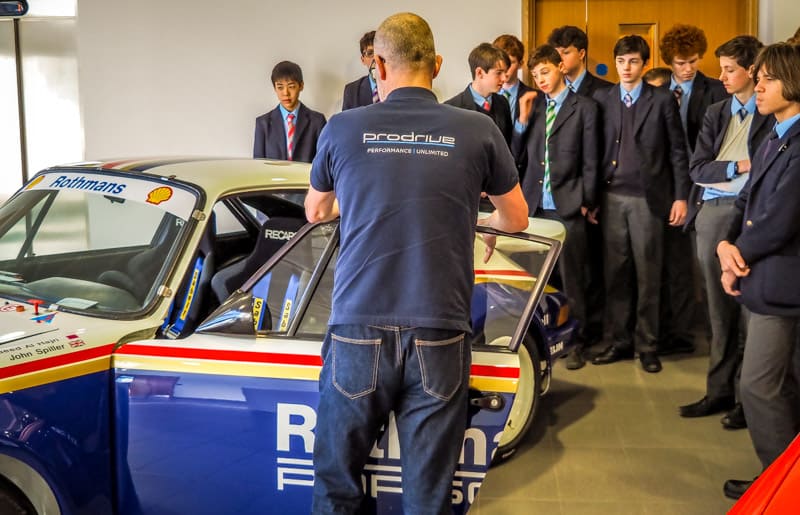 Prodrive tours are open to the public (provided COVID-19 is not hanging around).

My tour guide on the day was Craig Scarborough, a part-time Prodrive tour guide, but a full-time Formula 1 nuffy who writes about all the technical stuff that most of us only pretend to understand. Rather than giving a ‘warts and all’ tale of the Prodrive factory tour, I’ll let the photos tell the story, but it’s suffice to say that there were sections where the camera was allowed, and others where it wasn’t. The collection on display was mostly rally cars, but there were Aston Martins, a Jenson Button Formula 1 car, and even one of Glenn Seton’s Aussie-built Ford Falcon Supercars. 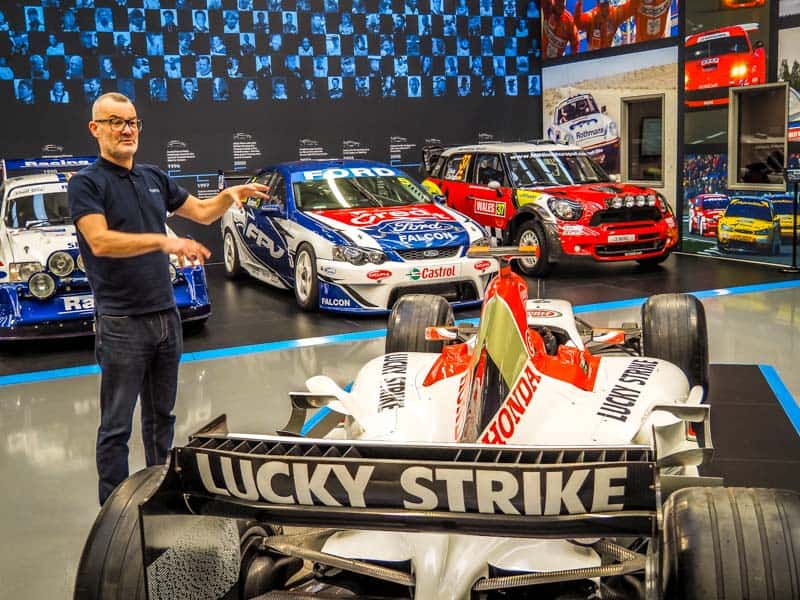 Craig Scarborough leads the tour at Prodrive, with famous cars everywhere you look.

Like any such tour, it didn’t allow me the time to stop and drool at each car for as long as I’d have liked to, but there was so much to see that the 90 minutes allocated was filled up pretty easily. Did I have a favourite? Being a Legacy RS owner, it was certainly hard to go past the 1992 Legacy of Ari Vatanen, which was currently being rebuilt on the factory floor. The Richard Burns Safari-spec Impreza WRC was also pretty special too. 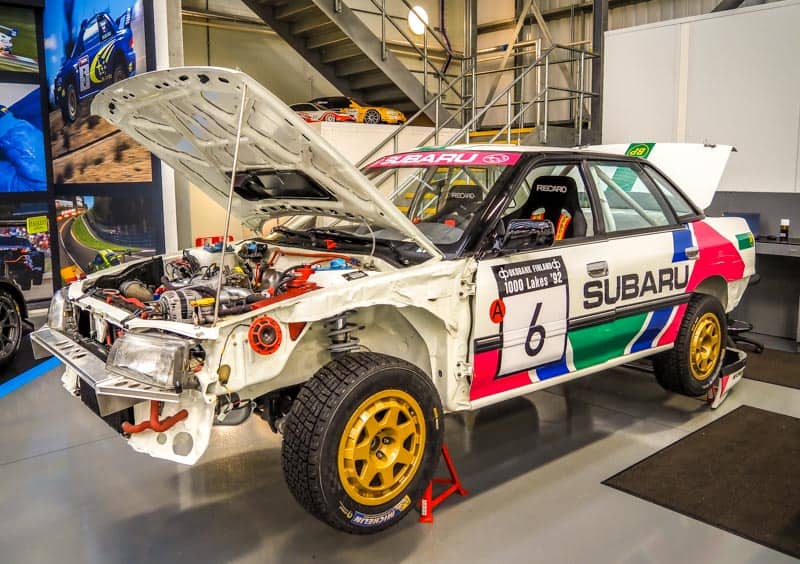 This 1992 Ari Vatanen Subaru Legacy RS is being restored to original condition at Prodrive. 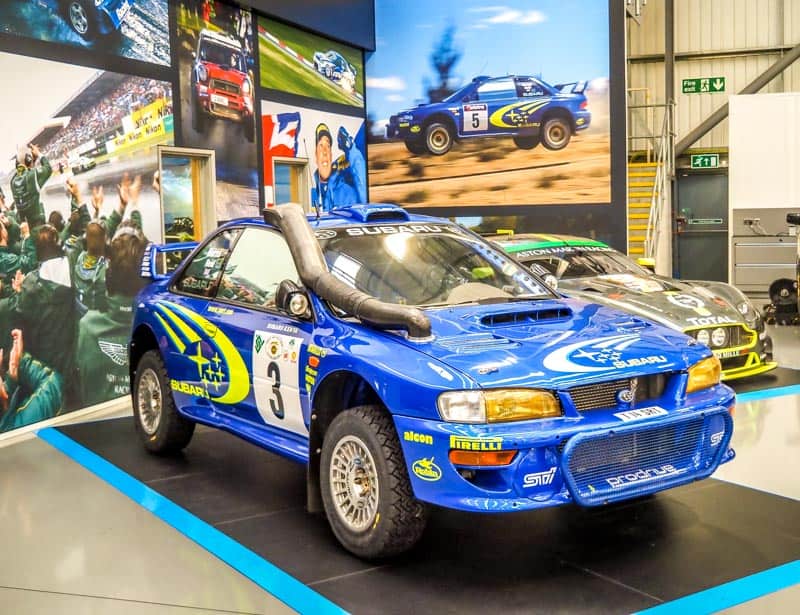 Prodrive’s WRC story has currently stalled, with the works Mini Coopers the last WRC-spec cars built by the company, and last run in 2012. Will we see the British company back in rallying? Nobody at Prodrive would say, but it’s hard to believe that we won’t. With David Richards still the Chairman, and David Lapworth still walking the corridors of the factory (even while I was there), you’d think there’s every chance that they’ll be back one day. They’ll certainly have thousands of ready-made supporters eagerly awaiting the day, most of whom fondly remember a certain blue Subaru, and drivers of the calibre of McRae, Sainz, Burns and Solberg. We can’t wait to have them back! Note: The Prodrive tour is open to the public, costs £30 per person, and is highly recommended. The factory is off the M40 Motorway, east of Banbury. 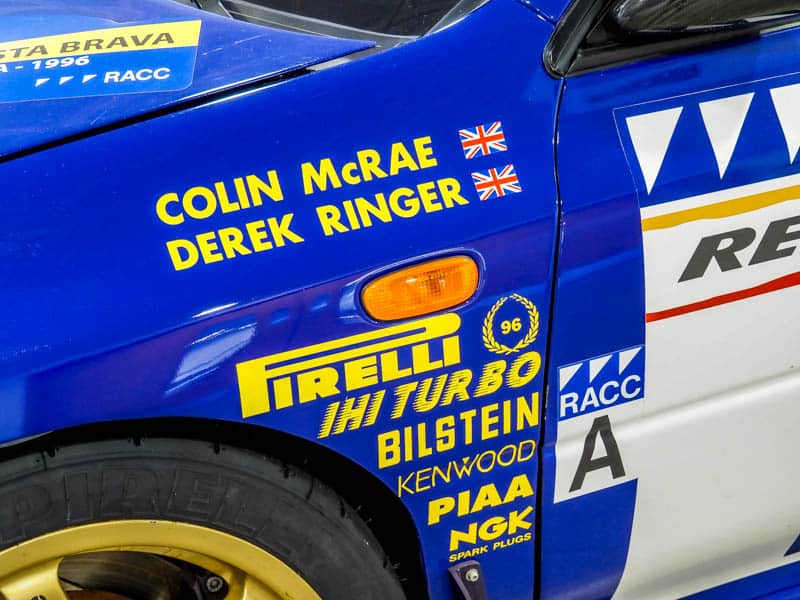 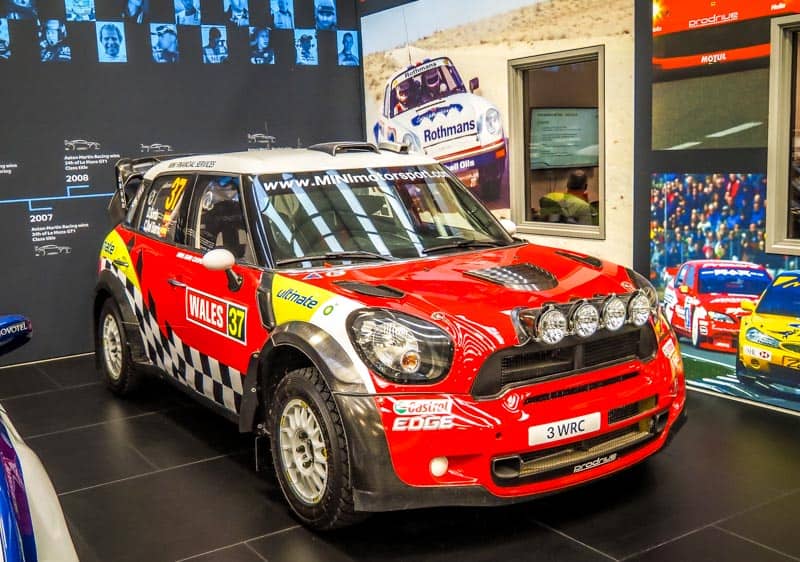 Prodrive last contested the WRC with a factory Mini Cooper team in the early 2010s. 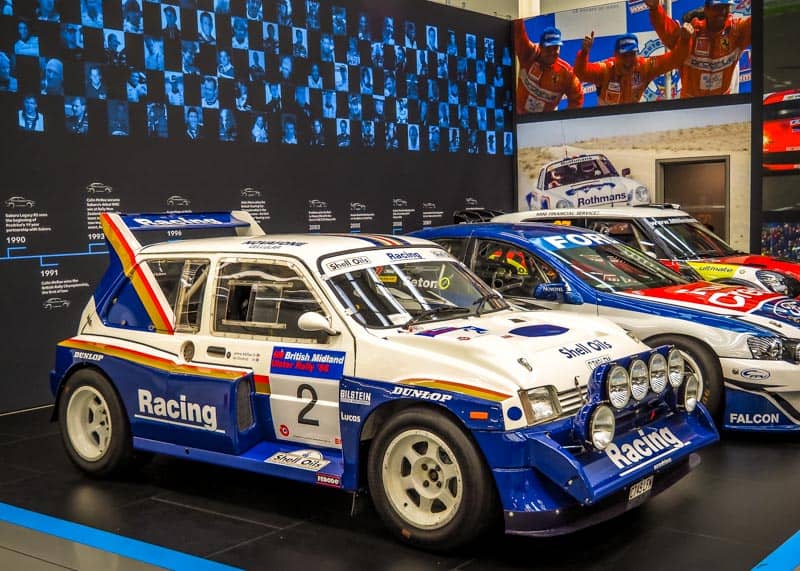 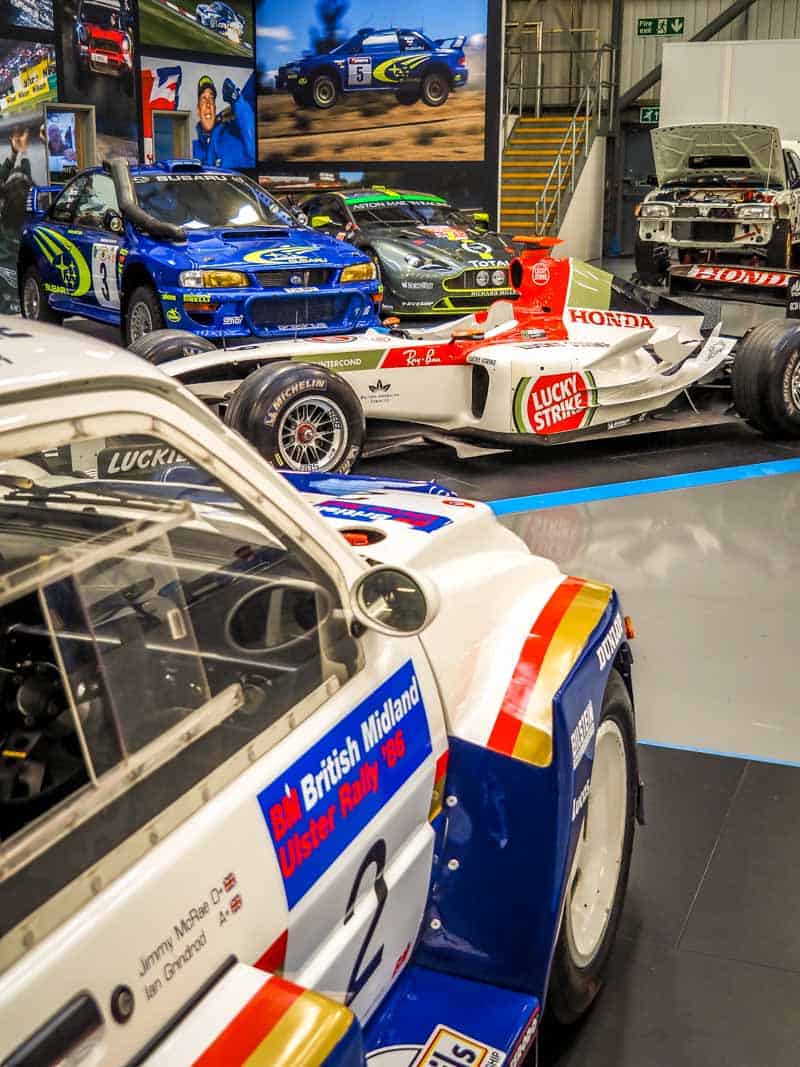 Choose your weapon ..... and there's plenty to choose from! 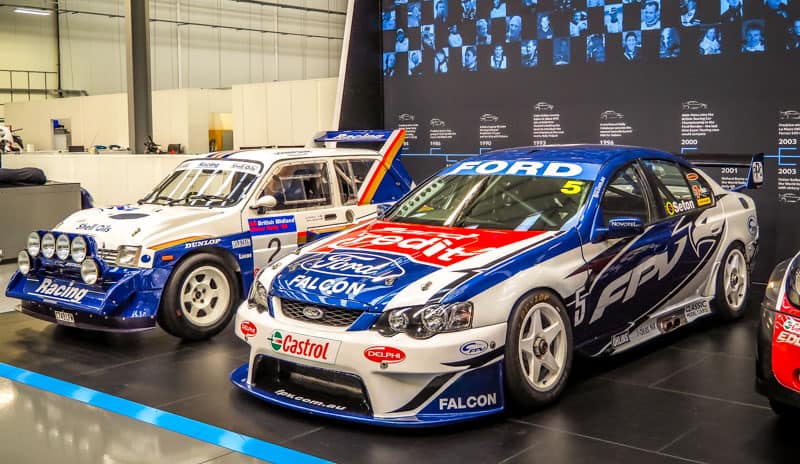 Even Glenn Seton's Falcon Supercar gets a run, sitting alongside a Group B Metro 6R4. 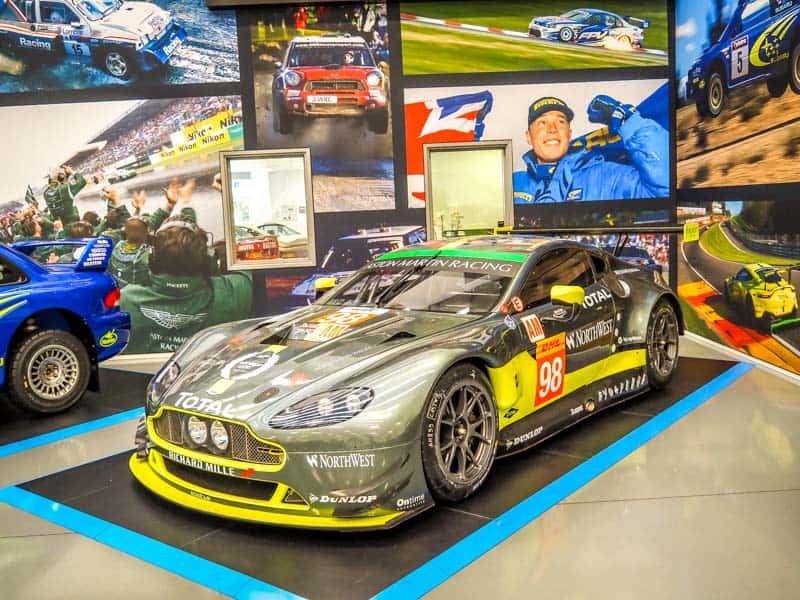 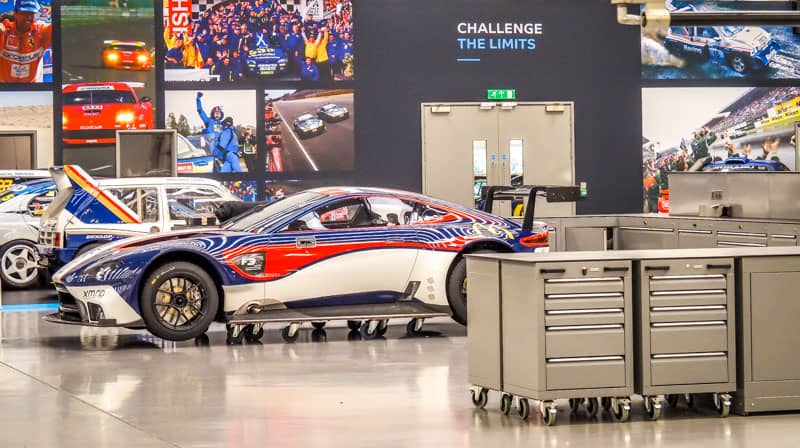 Unsurprisingly, you could eat your dinner off the floor of the Prodrive workshop. 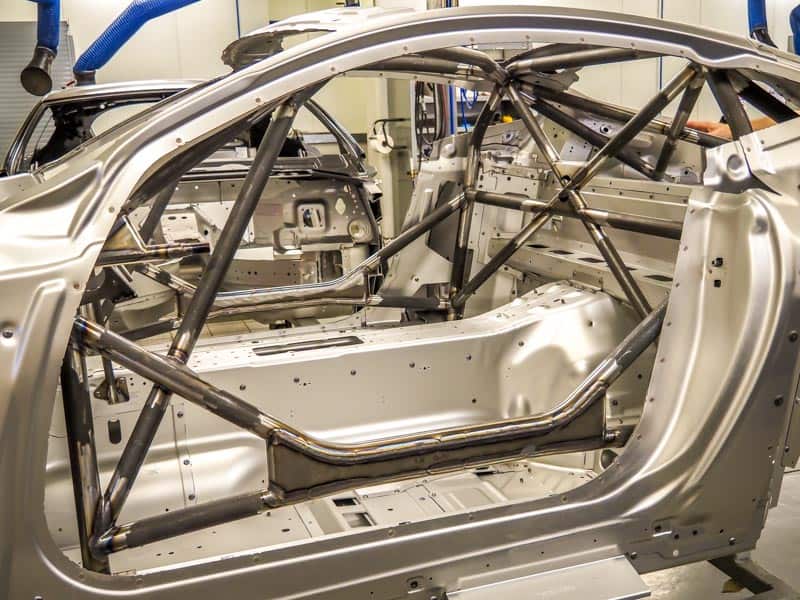 The team at Prodrive install their own roll cages to the Aston Martin race cars. 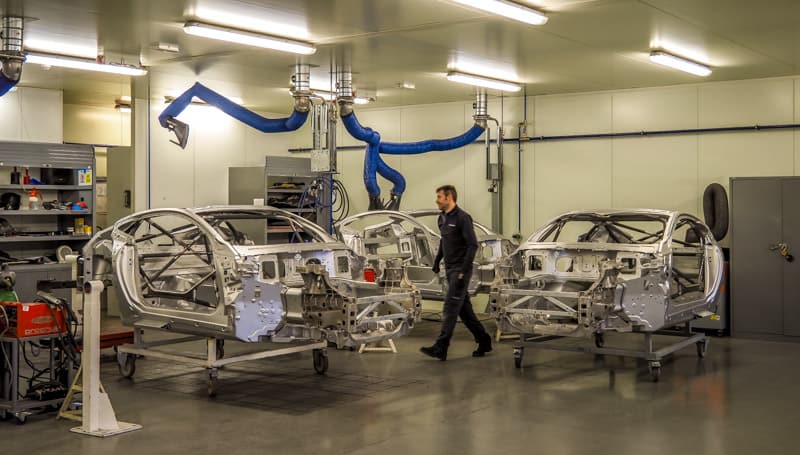 Aston Martin body shells getting ready for the transformation into Prodrive race cars.


In just 5 weeks this team took the @OvsiVentilator from a concept to a fully working pre-production prototype, tested to UK Gov specs. It will soon go into production in South Africa for use across the continent where there are just 2000 ventilators for 1.2 billion people. pic.twitter.com/y0o5nPGsmS