Feature: Better to be safe than sorry - RallySport Magazine
×

Feature: Better to be safe than sorry

RallySafe has become a common addition to rally cars in Australia, New Zelaland and around the world.

RallySafe’s introduction into the World Rally Championship in 2018 will be a triumph for Australian ingenuity. Late last year we looked into the emergence of the Tasmanian-designed safety system, and how it works.

Go back 40 years and safety in rallying meant that the crew (probably) had a bolt-in half roll-cage made of aluminium, maybe wore a helmet of one type or another and wore long pants, but often only a t-shirt during competition.

Perhaps a tongue-in-cheek comment, but competitors were often reminded not to roll into the scrub upside-down, as it may have been difficult to locate them in heavy forestry if they ever wanted to be recovered. “Keep the shiny side up!” was the call-out.

Move forward to the mid to late 90s and there was recognition that covering the extremities with long sleeves would be a positive improvement – and cotton was recommended, as opposed to that pesky nylon which tended to burn!!

During this era, ‘OK’ boards and ‘red crosses’ were included in rally road books, so that at least a crew could indicate to fellow competitors that they were stranded (but unhurt), or in the worst case, needed some assistance.

Red crosses were eventually replaced by green crosses due to some trademark issues, but overall standards were lifted and safety in rallying was finally recognised as an important issue.

Having an ambulance on site to follow the rally, or even a qualified first-aider was probably a luxury at any event.

Obviously that situation has since changed dramatically, and in major events FIVs (First Intervention Vehicles) are strategically located along the rally route to be able to render assistance in the earliest reasonable timeframe.

While some of this reflection of days gone by may seem incredulous, it was real.

Recognition of the importance of safety and the risks associated with rallying as a dangerous form of motorsport promoted positive change at all levels.

As a result, no rally car competing today should pass scrutiny without a full and comprehensive steel roll-cage, recognised safety-standard seats, five-point safety harnesses and, for the most part, HANS devices to protect the neck and head.

Coupled with the integral safety equipment in the car, crews are wrapped in fireproof underwear and multi-layer driving suits, and with helmets that would have only been seen in a space shuttle mission 25 years ago!

It would be challenging to add to the effectiveness of current safety standards, but RallySafe does just that.

RallySafe is an innovative vehicle-to-vehicle communication system that transmits hazard warnings via in-car units during competitive rally events. By using the RallySafe system, competitors have the ability to understand where they sit on a rally road, in real time, in perspective with following or forward competitors.

Most importantly, RallySafe shows rally organisers where a car and crew is at any time during an event. Using GPS, GSM and satellite communication capabilities, the system allows warnings and vehicle data to be transmitted as efficiently as possible.

Each car is fitted with a small electronic module, incorporating a full colour display, keypad, accelerometer and radio transceiver.

The main safety function of the RallySafe system is to automatically generate hazard warnings in the event of an accident.

The ‘Push to Pass’ function is a brilliant innovation that allows a competitor to warn forward vehicles of their intention to overtake on a potentially dusty or hazardous road.

In years gone by, passing a slower car was difficult to impossible during adverse conditions, and while some drivers resorted to a nudge in the tail of a slower car, equally, many drivers overdrove the situation and ended up off the road by trying too hard in blinding conditions.

RallySafe is an Australian idea that has been recognised worldwide as an essential safety innovation.
Since its inception in 2009, RallySafe has taken the rallying world by storm.

Originally the system was only available in Australia, but has now spread to supporting events in countries as diverse as New Zealand, Malaysia, Thailand, Japan and China, Europe, North America, and Canada. The system is in use in every event in the Asia-Pacific Rally Championship.

The parent company is Status Awareness Systems (SAS), which was formed in 2010 as a result of recognition that multiple on-track collisions could have been avoided.

Directors of the company are Stephen Sims, who is well connected within the Australian motor racing industry, and Wayne Maxwell, a world standard instrument mechanic with a passion for motorsport.

Together, the directors of SAS have delivered this technology to the rallying world to ensure the ongoing safety of competitors in the sport, at a time when safety standards are high, and rally speeds are higher than ever before. 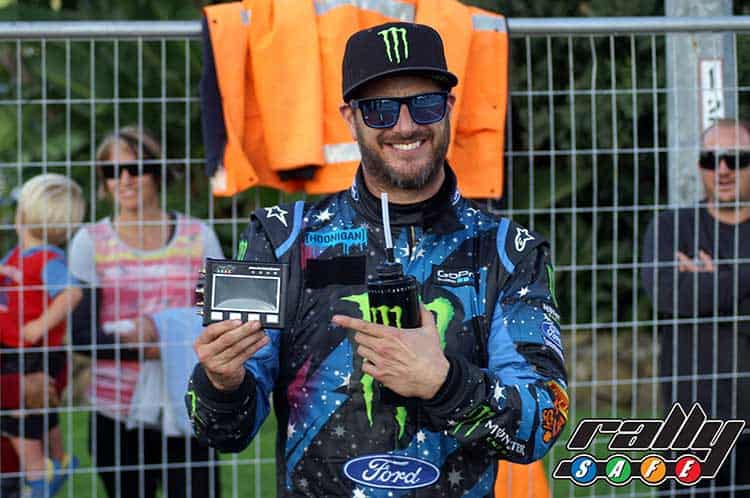