Fourth place for Jari-Matti Latvala on the Tour de Corse was not Toyota Gazoo Racing’s finest result so far this year, but it was a special breakthrough for the TGR chief Tommi Makinen.

It was Tommi’s best result in the nine years he had been in Corsica!

In the eight years he competed on the island (seven years with Mitsubishi, then finally with Subaru) he never finished higher than sixth – and in all eight years of driving full state-of-the-art machinery on this event, he never once scored a fastest stage time on this event.

And four times he dramatically ended his rally with a violent crash!

Tommi: “Corsica is the biggest challenge in tarmac rallying, the most extreme tarmac conditions.  Nice and twisty, it is really a driver’s dream tarmac rally.

“A driver’s skill matters a lot, there are so many corners, seemingly millions of corners, all of a little bit different angle and length.  Very difficult to make good accurate pacenotes to allow you to go flat out everywhere.

“It is the most difficult tarmac rally, but at the same times the surface is very nice and good and it is also enjoyable rally. 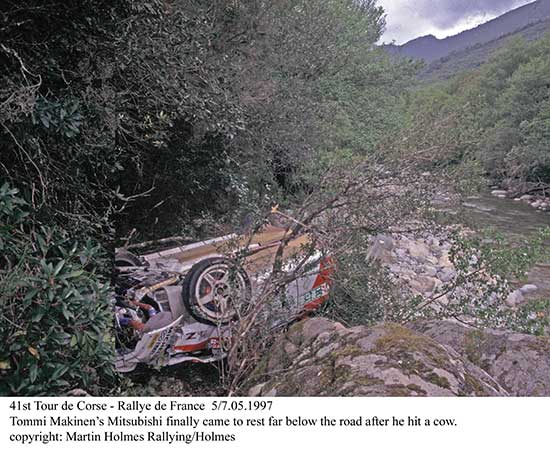 “Basically I liked it a lot during my career, but somehow I was a bit unlucky. It seems that when some rallies do not start going well, bad luck follows you always year after year.  Corsica was one of the events where bad luck was following me all the time.”

Tommi’s most celebrated accident came in 1997 when he met a cow in the road and the car shot off down an almost vertical steep bank to end up far below in a river bed.

I had never before dared asked Tommi what his emotions were when he saw the cow.

“That was such a sudden moment.  Terrible, terrible.  It was one of the fastest places and suddenly I saw the cow jump in front of us. 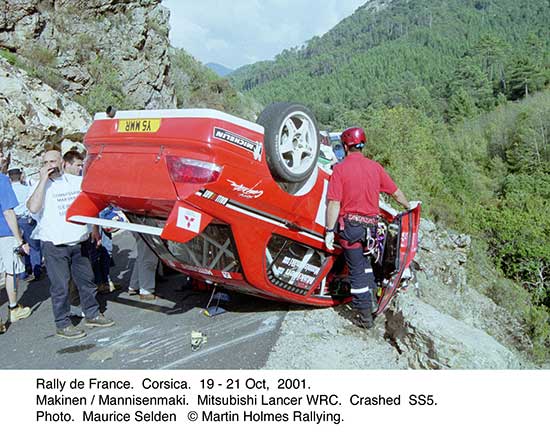 “There was not even time to slow down.  The cow just flew over the top of the car, we went straight to the wall on the left side of the road, which shot us off the road on the right.  It was such a long drop down to the river below.

“I could not brake before we hit the cow and lost control of the car.   We brushed through in trees and bushes which slowed our fall down a bit.

“The first thing I still remember as we were flying through the air was to turn off the master switch.  I was afraid we might fall directly down to the river bank.

“I don’t know what we hit first, but the car finally ended up between some big rocks upside down, happily not in the water, and the rear window was the only way to get out of the car. 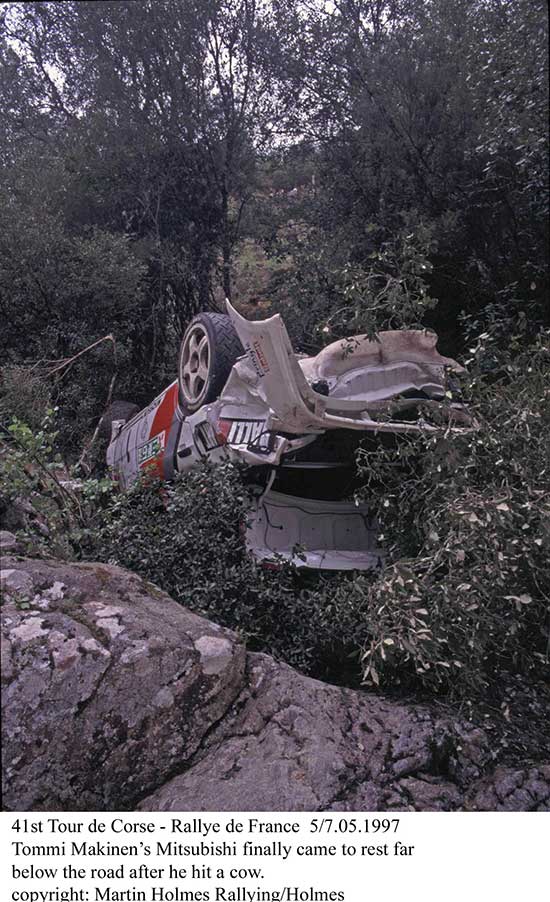 “You know, in a rally car there was not too much room to squeeze out past the roll cages in order to come out from the back window.  For me it was a bit easier, but for my co-driver, Mr (Seppo) Harjanne, it was taking longer for him to get out of the car.”

Then what about that accident with Risto (Mannisenmaki) in 2001?

“It was a brand new car which was not yet fully sorted out.  Something silly happened with front suspension which was not working accurately.  We touched the front corner on a very narrow road, with a drop on the outside.

In 2000 Tommi had a bad rally. Firstly he touched some rocks which damaged his steering and the brakes, then later on he slid wide on a bend and the car tumbled down a hillside, ending up far from the road almost out of sight in deep undergrowth, but on its wheels.

And on his final season with Mitsubishi, in 2002, he aquaplaned on standing water and wrecked the suspension when he impacted a rock face.

Directing his new team from the service parks, Tommi is now in a safer place, and he admitted it was a different feeling coming back to Corsica in his new role.

Hopefully in the years to come, his team will finally improve his personal results in Corsica even more!

It’s difficult to know why Tommi had such a bad record driving on the island.  There is a widely held myth that the Finns make bad asphalt rally drivers, but the records show that isn’t true.

Markku Alen won the Tour de Corse on two occasions, but Markku did not win world championship title, while Tommi was champion four times, one for every time he crashed in Corsica ….